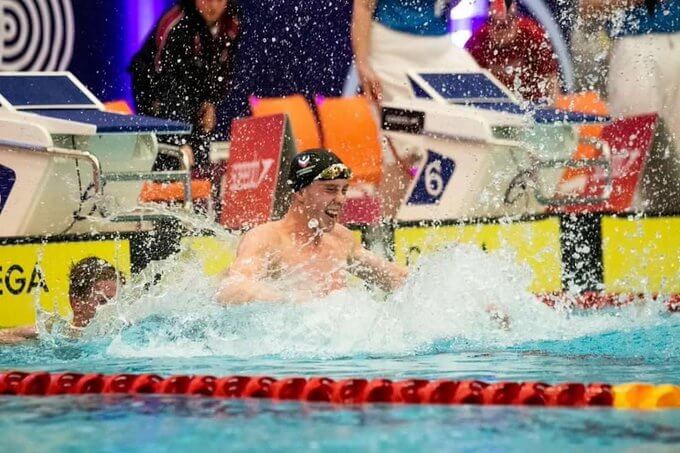 Daniel Wiffen put his hands on his head as he recalled how he became the first Irishman to set a European record in the pool.

The 21-year-old went 7:25.96 in the 800 freestyle at the Irish National Winter Championships, slicing 1.98secs from the previous mark of 7:27.94 set by Gregorio Paltrinieri at the 2021 short-course Europeans.

It moved him to within 2.54secs of Grant Hackett’s world record of 7:23.42 that has stood to the Australian great since July 2008.

Not that Wiffen felt he’d done such a fast time in Dublin, telling Swimming World:

“I put up a short clip on Instagram because I did this with my hands (on his head).

“I didn’t see what time I went: I thought I was really slow because the race felt really slow when I was doing it.

Days earlier, Wiffen had gone sixth all-time in the longest race in the pool with a national record of 14:14.45 to top the 2022 world rankings.

It was 2.43secs swifter than the 14:16.88 in which Paltrinieri won the world short-course title in Melbourne.

And his 800 record was also 4.03secs swifter than the championship record of 7:29.99 in which the Italian claimed the title in Australia.

“It’s a big confidence boost that I took off so much time.

“In terms of beating Greg, I guess it’s different because he is in a different country. He went through all the procedures to go to Australia and I didn’t do that.

“In terms of time, yes, obviously it is very good to beat an Olympic champion.”

Wiffen is coached at Loughborough by Andi Manley in a training group containing – among others – Felix Auboeck, who won the 400 free at the 2021 short-course worlds as well as 200 bronze at this year’s long-course Europeans in Rome.

Since moving from the Swim Ireland National Centre, Dublin, Wiffen has consistently set about reducing his times and in 2022 has rewritten the Irish record books across the 400, 800 and 1500 free in both the long and short-course pools plus a 400IM mark of 4:11.05 in the latter.

He’s gone from a 15:04 short-course 1500 free to 14:14:45 and an 8:12 over 800 in the Olympic-sized pool down to 7:46.32 en-route to the final at the Budapest World Championships where he finished eighth alongside the likes of Bobby Finke, Paltrinieri, Florian Wellbrock and Mykhailo Romanchuk. Weeks after Budapest, Wiffen won silver in the 1500 free at the Commonwealth Games representing Northern Ireland, one of only two men inside 15mins along with Australian champion Samuel Short in 14:51.79.

That was followed by his record-breaking in the 25m pool which also included a national 400 standard of 3:38.40 as he rewrote the record books in the space of seven days.

Wiffen has increased his training, doing more volume, and also benefiting from altitude training at Sierra Nevada and all under the watchful eye of Manley, of whom Wiffen said:

“He is not a coach who is in your face shouting at you all the time. He will trust you to do the work.

“If you’re not going to put the effort in, he is not going to shout at you and scream at you to start doing it.

“It’s more you’ve got to find a way yourself to do it.”