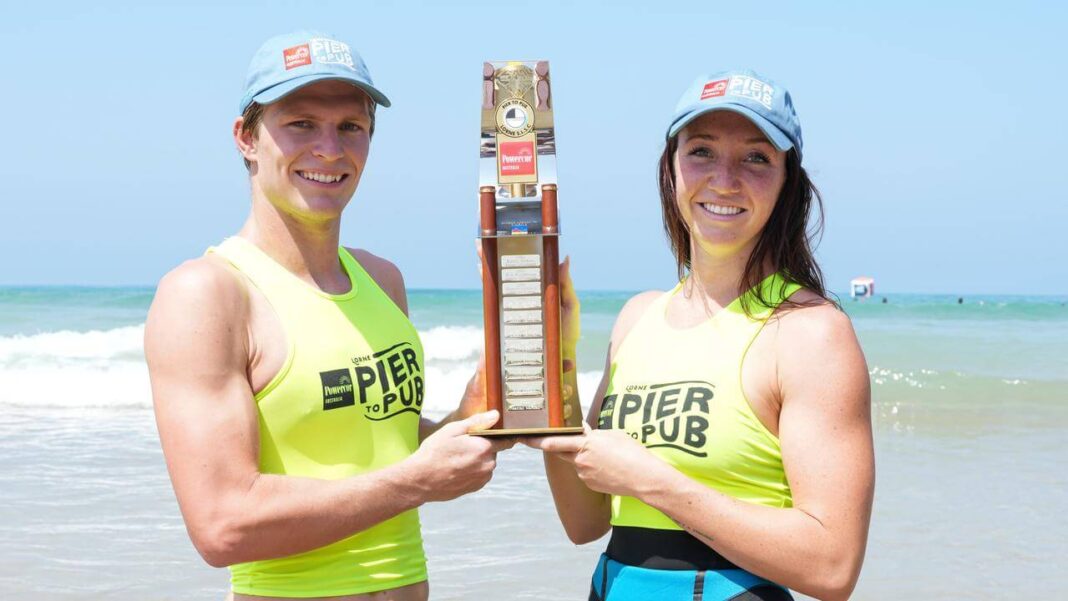 Australian swim star Lani Pallister has started 2023 the same way she finished 2022 – on top of the podium – after winning the iconic Lorne Pier-To-Pub Ocean Swim Classic on Victoria’s Surf Coast for a fourth straight time.

The 20-year-old from the Gold Coast was joined by men’s winner, Australian open water representative and Australian surf belt champion, Hayden Cotter who also chalked up a fourth straight victory in one of the closest finishes in the event’s 43-year history.

A STAR IN LORNE: Lani Pallister at home in the pool and the ocean. Photo Courtesy: Lorne Pier-to-Pub.

Pallister finished last year with a golden reign at the Fina World Short Course Championships in Melbourne where she won four gold medals in the 400, 800 and 1500m freestyle and as a member of the world record breaking Australian 4x200m freestyle relay team.

She now has her sights set on this year’s World LC Swimming Championships in Fukuoka and a place on the Australian Olympic team for Paris next year.

Her continued Lorne domination was the culmination of a busy year for the rising star of world distance swimming after her silver and bronze medal efforts at the Fina Word LC and Commonwealth Games before leading the Australian team to victory at the World Lifesaving Championships in Italy.

Born and bred in the water, Pallister has followed in the footsteps of both her mother, Olympian Janelle Elford and father, former Australian surf and triathlon champion Rick Pallister.

She was right at home in the Lorne surf chop and a comfortable winner in the 1.5km ocean swim – finishing over a minute ahead of the women’s field.

“Lorne is always a fun day, the organisers always do a terrific job of putting on an exciting day,” Pallister told the Surf Coast Times after the race.

“It might be something we come and do for the next 10 years but you never know.

“It was very difficult conditions out there especially with the heat, it’s always different racing in a wetsuit compared to the pool.

“There are some incredible athletes so it’s always nice to come down here and have a bit of fun with them.”

Cotter, who beat Olympic champions Gregorio Paltrinieri and Mack Horton to win the first of his Lorne swims in 2018, added his second and third wins in 2019 and 2020 before 2021 and 2022 became virtual swims due to Covid. And he had to use all of his surf lifesaving skills to edge in front of Australian team mate Bailey Armstrong in a frantic run up the beach after the pair negotiated the waves to the beach.

“There has been a great crowd down here building since this morning so it was great they got to see the excitement of a sprint finish,” Cotter told the Melbourne Age.

“It is a warm day out there and at about the halfway mark it started to get a little hot, but the conditions were great which made it a really enjoyable swim.

“I’ve had a few close finishes here at the Pier to Pub over the years and riding the surf to the finish in a close group is all part of the fun.

“My preparations for the event were a little different this year, after some time off I got back into it and have now moved to Manly. This event kick starts what will be a great few weeks ahead.

“Next up is the Manly Surf Lifesaving Carnival next weekend, so I’ll do my best to back up today there. But there’s no doubt the Pier to Pub is the biggest open water swim around, there’s a 43-year history and 5,000 swimmers out there so it’s certainly one you can’t miss!”

Cotter, who forged his open water swimming career under coach Harley Connolly (recently appointed as the Head Coach of the USC Spartans on the Sunshine Coast) and represented Maroochydore in a celebrated surf lifesaving career – has recently moved inter-state to Manly on Sydney’s Northern Beaches.

The one surf title that bas eluded Cotter, the Australian open surf race, has been dominated in recent years by fellow Australian open water star, Nick Sloman. with 1992 Barcelona Olympian Deane Pieters the last Manly swimmer to win the title back in 1990 – when he led home a Many quinella ahead of iron man star Craig Riddington. Melatonin: Are you Taking Too Much? | POPSUGAR Fitness

The Power of Planning