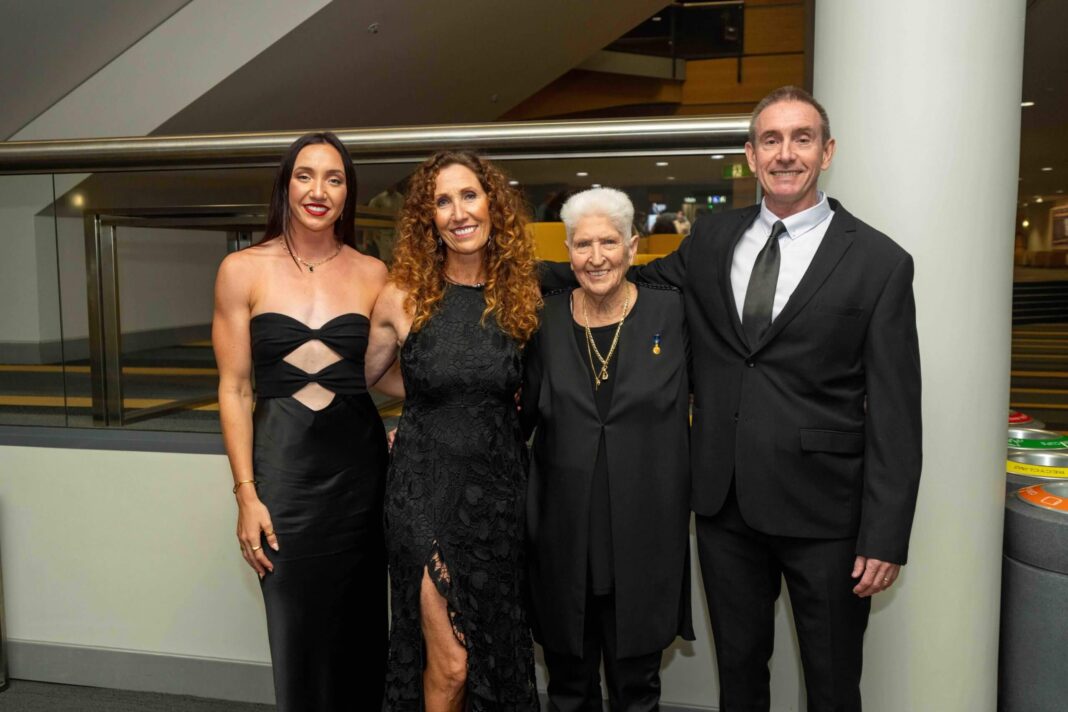 Little did they know it at the time but former Australian surf lifesaving rivals Ron McKeon and Rick Pallister would father two of Australia’s greatest swimmers – Emma McKeon and Lani Pallister –the stars of last week’s 16th World Short Course Championships in Melbourne.

Between Australia’s most successful Olympic and Commonwealth Games athlete Emma and rising star Lani, were two of the stars of the show – the girls won 11 medals – eight gold and three silver – Lani the 400, 800 and 1500m freestyle and the first woman to take out three freestyle titles– with Emma the 50 and 100m freestyles and 4x100m freestyle relay and 4x50m medley relay and Lani in the 4x200m.

SWIMMING ROYALTY: David, Emma and Ron McKeon who along with Ron’s wife Susie were awarded the Services to Swimming In Australia on behalf of “The McKeon Family” by Swim Coaches and Teachers Australia. Photo Courtesy: Wade Brennan

Emma continuing to show why many believe she is now our greatest swimmer ever – after anther major medal haul which included two milestone relay splits.

With their proud parents – Ron and Susie McKeon (nee Woodhouse) and Rick and Janelle Pallister (nee Elford) cheering from the grandstands in a spectacular week of racing at the Melbourne Sports And Aquatic Centre.

Emma and Lani are certainly carrying on the family names on a golden pathway that will hopefully see them become Olympic team mates in Paris in 2024 – McKeon for her third Olympic campaign and Pallister, after the heartbreaking miss for Tokyo last year making her Games debut and join 1988 Seoul Olympian mother Janelle in the Olympic arena.

But there were none better than their celebrated waterman fathers.

There were times when Ron McKeon and Rick Pallister were arch rivals in a most competitive surf lifesaving environment, an institution on the Australian sporting landscape – sharing the podiums at Sydney Branch, NSW State and Australian Championships.

In fact Ron and Susie were both members of the 1982 Australian Commonwealth Games team, surf-swim star Ron in the 1980 and ’84 Olympic teams with Janelle in the 1988 Olympic team and the 1990 Commonwealth Games team while Rick Pallister was regarded as one of Australia’s best surf belt race and surf race champions before embarking on a successful ironman and triathlon career, mixing it with the world’s best.

And of course the couples will all agree the success of their daughters in the water is all in their genes. The iconic surf racing in Australia had an Olympic flavour all of its own that developed a competitive environment and Ron McKeon and Rick Pallister were in the thick of the action week-in week-out – head-to-head rivals.

Ron would become a household name at his beloved South Maroubra Surf Club, following in his family footsteps as would Pallister who was a major player with the success of Elouera Surf Club and Cronulla Triathlon Club.

Ron and Rick were dominant forces in the 1970s, 80s and 90s – golden eras in swimming, surf lifesaving and triathlon when Olympians dominated surf races.

McKeon and training partners – fellow Olympians Graeme Brewer and Max Metzker (under legendary coach John “JR” Rodgers) were all competitive in the rough and tumble surf and belt racing – alongside the likes of Steve Holland, Mark Tonelli, Robbie Nay and Paul Moorfoot.

At Clifton Beach in Tasmania in 1983 it was Pallister who beat Olympians Brewer and Moorfoot in one semi-final of the power-based Australian open surf belt race while McKeon won the other semi-final – with Commonwealth Games gold medallist and Moscow and LA Olympian Brewer surging ahead to out-touch Pallister in a hotly contested final ahead of Moorfoot and McKeon – Pallister the only non-Olympian in the mix. ACTION PACKED: Rick Pallister showing the form that made him one of Surf Lifesaving and Triathlon’s ‘s best. Photo Courtesy: John Veage.

Rick was also a trailblazer in the world of triathlon, aquathon and biathlon with the likes of triathlon royalty Greg Welch, Craig Alexander, Chris McCormack, Michael Maroney, the late Mark Pringle and Michellie Jones at Cronulla Triathlon who also had a stint in the Uncle Tobys Ironman Series.

Taking bronze to McKeon and Pallister in that 1979 surf race battle royal was celebrated Channel 7 Olympic, swimming and surf lifesaving commentator Jon Harker who remembers just how competitive they were.

“Ronny was an out and out champion in the pool and the surf – it was in his blood and Rick was one of the best surf race and belt swimmers I’ve ever seen or raced,” said Harker. “When we reached the turning buoys in surf races, there was no one better than Rick Pallister, who would turn on the after-burners..it was like he pushed the go button.

“Coming to the buoys in that race in Perth, I was thinking hang on to their feet and maybe get a small wave I’d be chance but Ronny and Rick just took off – there was no catching them. “It is so good to have followed Emma and Lani too – there is so much of their fathers and their mothers Susie Woodhouse (Emma’s mum) and Janelle Elford (Lani’s mum) in these two girls.

“I know how proud they are and how proud all of Australia is with their amazing achievements.

“To see both Emma and Lani on the Australian Swim Teams together and swimming so well in Melbourne at the World Short Course Championships has been very exciting.

“Swimming and surf has seen some great families and to see the grandparents and Lani’s godmother, the legendary Dawn Fraser playing such active roles was very special.

“Emma and Lani are certainly the best of their outstanding parents, both in and out of the water.”

Girls born into a special gene pool..and it may well be in Paris in 2024 when we see another major chapter written in these family albums. This Is a Near-Exact Barefoot Dreams Throw Dupe