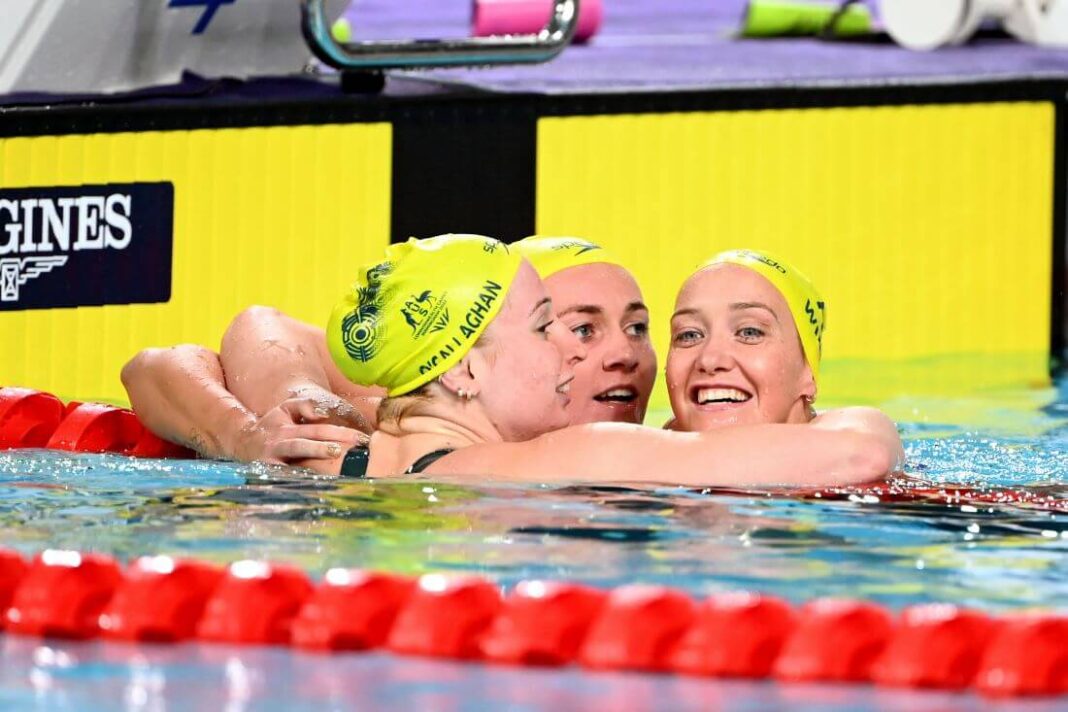 Just a year earlier, at the COVID-delayed Olympic Games in Tokyo, Australia entered the women’s 800-meter freestyle relay as the favorite. More, there was discussion about the first sub-7:40 performance in the event’s history. The outcome, though, was not to the Aussies’ liking, as China surged to the gold medal, the United States and Australia securing silver and bronze, respectively.

Redemption arrived at the Commonwealth Games.

Racing at the Sandwell Aquatics Centre in Birmingham, England, Australia powered to the title in the 800 freestyle relay, with the quartet of Madison Wilson, Kiah Melverton, Mollie O’Callaghan and Ariarne Titmus crushing the world record. With Titmus anchoring in 1:52.82, the Dolphins delivered an effort of 7:39.29 to crack the 7:40 barrier and earned recognition as Swimming World’s Female Relay of the Year.

In Tokyo, all three medalists went under the previous world record in the event. But because Australia was deemed the team to beat, the showing was considered a disappointing. A repeat was not a remote possibility, as Titmus’ unmatched closing power was complemented by consistency on the opening three legs.

Wilson jumpstarted the Aussies with a leadoff split of 1:56.27 and was promptly supported by a 1:55.40 split from Melverton. Best known for her talents in the longer freestyle events, Melverton clearly displayed her worth in what has become a long sprint. With Canada hanging close at the midway point, just more than a second back, O’Callaghan put the outcome out of question with a third-leg split of 1:54.80. That contribution set the stage for Titmus, the reigning Olympic champion in the 200 freestyle. All she did was generate the fastest relay split in history and bring the Aussies to the wall under 7:40.

In addition to lowering the global standard, the performance was further evidence of Australia’s female depth, which rates at one of its highest points in history. Heck, the squad did not even include Emma McKeon. Although she has shifted her focus to the sprint-freestyle events, it is worth noting that McKeon owns some of the fastest times in Aussie history in the 200 freestyle.

With the 2023 World Championships scheduled for Fukuoka this summer, Australia is expected to tangle with the United States for top billing in the 800 freestyle relay. Thanks to rising stars such as Bella Sims, Team USA looks solid in the 200 freestyle. But make no mistake, the Aussies are back to favorite status.

It just took another year.

Are Seed Oils Behind the Majority of Diseases This Century?