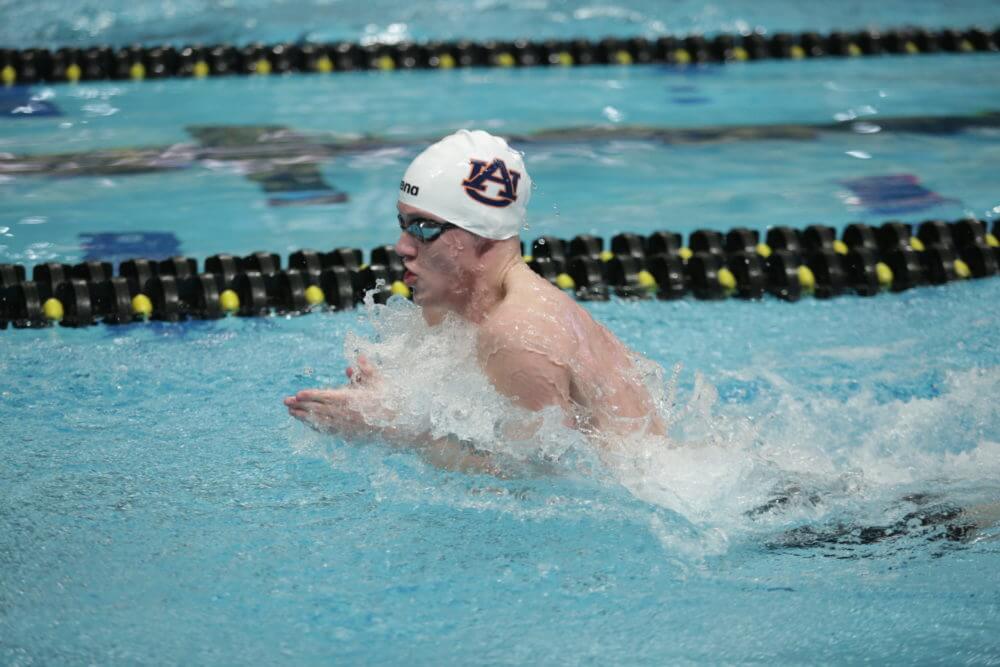 The Auburn Tigers raced at home against Texas A&M Wednesday and emerged victorious before heading up I-85 to Atlanta for a Saturday dual meet against Georgia Tech. The Tigers cruised to wins in both men’s and women’s competition against the Yellow Jackets, with Auburn’s men winning 213-to-87 while the women took a 218-82 victory.

It was a busy week of racing for the Auburn Tigers, but Ryan Wochomurka’s crew was up to the task. The men picked up their third top-25 dual win of the season while the women snagged their sixth victory of the year.

WOMEN
Saturday kicked off in dominating fashion for the Auburn women. Ellie Waldrep, Anastasia Makarova, Meghan Lee and Lexie Mulvihill combined for the win in the 400 medley relay. It was a tight race for second between the Tiger’s B and C relays and ultimately it was Daisy Platts, Brynn Curtis, Abigail Gibbons and Polina Nevmovenko who edged out their teammates for the win.

Emily Hetzer kicked off a sweeping effort in the 1000 free for her third win in the event this season. Averee Preble and Lilly Byrne followed Hetzer to make sure the Tigers claimed maximum points.

Hetzer, Byrne and Nevmovenko returned in the 500 free to take yet another sweep for the distance group.

Continuing her strong day in Atlanta, Lee lead another sweep for the Orange and Blue in the 200 free. Payton Marvin and Nevmovenko brought in second and third.

Auburn, also known as backstroke university, shows no signs of stopping its dominance anytime soon. Waldrep, Kyla Maloney and Hannah Mattson stole the show in the 100 back while Waldrep, Kensley Merritt and Platts took the sweep in the 200.

Makarova claimed a win in the 100 breast for the third time this season. Curtis and Valerie Tarazi weren’t far behind, though. Curtis would rebound to win the 200 breast, with Tarazi and freshman Ainsley Jones hitting the wall second and third.

The last time Casey Cullen touched the wall first was in the Tiger’s dual with LSU last October. Cullen snagged her third-career victory when the 200 fly came around. Junior Hannah Ownbey dialed up a third-place effort.

Emma Steckiel showed out in the sprints on Saturday. While Mulvihill snagged second in the 50, Steckiel outswam the field in the 100 free to take her first individual win of the season.

Mulvihill would rebound for a win in the 100 fly, though. Abby Gibbons also raced well, finishing third overall.

After a win in the 200 IM on Wednesday, Ownbey made it a clean sweep for the week against Georgia Tech. Ownbey led the way while Meghan Lee came in with a solid second-place finish.

Rounding out a dominant meet, Nevmovenko, Mulvhill, Steckiel and Claudia Thamm ground out another win in the 400 free relay.

MEN
The men brought an equally impressive effort to the 400 medley relay. Aidan Stoffle, Reid Mikuta, Nate Stoffle and Kalle Makinen bested the field by more than a body length to kick off the meet.

Grant Davis led the charge in 1000, securing second place with Michael Bonson snagging the fourth spot. Later in the 500, it was Mikkel Gadgaard who hit the wall in second and Mason Mathias secured third.

Gadgaard was also solid in the 200 free where he finished third. However, it was Christian Sztolcman who had the Tiger’s best effort in the event, missing the win by just .13 seconds. Ryan Husband would round out Auburn’s point total with a fourth-place finish.

Saturday was Nate Stoffle’s turn to shine in the 100 back. The Georgia native swimming on home turf ran away from teammates Andrew Simmons and Makinen to steal the crown. Simmons turned around in the 200 to outswim Aidan Stoffle and Lleyton Smith as the Orange and Blue swept both events.

Mikuta has swam in five collegiate events this season and now has five wins in the 100 breast. The junior won the 200 as well while Henry Bethel would go on to pick up third in both the 100 and 200. Jacques Rathle also snuck in a second-place effort in the 200.

The men’s 200 fly was all M’s. Mason Mathias, Seth Maschmeier and Evan McInerny that is. The trio swept the longer version of the event. Meanwhile, Aidan Stoffle, Sohib Khaled and Rusty Jerger stole the show in the 100.

Mihalis Deliyiannis won his first race as a Tiger on Wednesday against Texas A&M and suddenly the young man cannot be stopped. The Roswell, Georgia, product outpaced everyone in the pool in the 50 free for his second straight win.

Makinen was back to his usual tricks in the 100, picking up the win and Sztolcman secured third.

Simmons, Rathle and Maschmeier rounded out Saturday’s individual events with one last sweep in the 200 IM. For Simmons, his two victories throughout the day were the first for the sophomore out of Johns Creek, Georgia.

Wochomurka’s men closed out a busy week of racing with one last victory in the 400 free relay. The law firm of Sztolcman, Makinen, Husband and Stoffle got the job done to ensure the sixth dual win of the season for the Tigers.

DIVING
Walker Creedon loves diving in the Peach State. The Virginia transfer already grabbed a win at the UGA Invite on the tower. On Saturday, Creedon bettered the effort with a personal best 406.88. Whit Andrus and Hunter Kebler would also round out solid performances on the platform, finishing third and fourth, respectively.

Fueled by Creedon’s performance, Andrus went for his own career-high on the 3-meter. With a 392.63, the Winston-Salem product not only secured a new personal best but also his first win of the season.

Abigail Farrar led the charge for the women on the tower, coming in second with a 246.83. Ashlynn Sullivan would snag fourth. Sullivan rebounded on the 3-meter with a 290.25 and a second-place finish with Farrar close behind in third.

Zendaya Celebrates Her 26th Birthday With a Throwback Photo

How to Improve For the Next Year