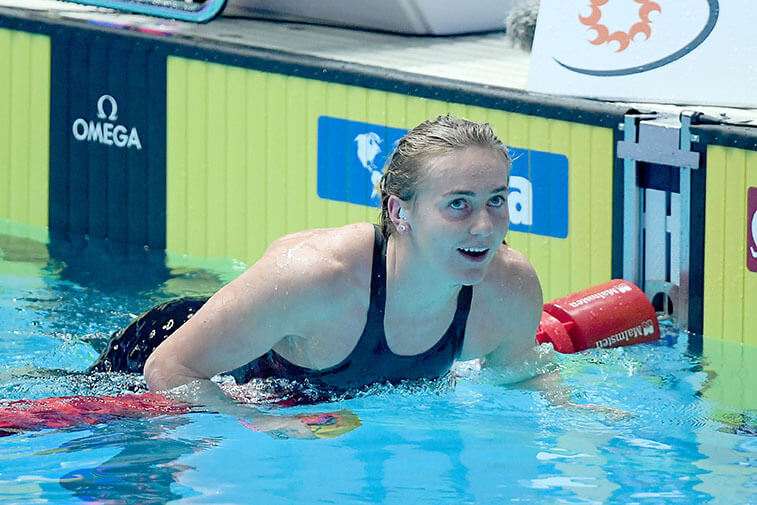 Australian dominance has been on display through the Commonwealth Games, with the women’s freestyle events the greatest example of the Dolphins’ excellence. Want proof? After the conclusion of the 800-meter freestyle on Tuesday night at the Sandwell Aquatics Centre, Australia has gone 12-for-12 in its freestyle-medal chase.

Just an hour after countrywoman Mollie O’Callaghan led an Aussie sweep of the podium in the 100 freestyle, Ariarne Titmus powered the Dolphins to a gold-silver-bronze showing in the 800 free. Titmus guided the latest sweep in style, as she established a personal best and was followed to the wall by Kiah Melverton and Lani Pallister. Titmus’ winning time of 8:13.59 was slightly quicker than her 8:13.83 that won her the silver medal at last summer’s Olympic Games in Tokyo. Titmus is the second-fastest performer in history, trailing only Katie Ledecky and her 27-fastest marks of all-time.

Melverton stayed with Titmus through the first half of the race, but dropped off the pace and finished in 8:16.79 for the silver medal. She was followed by Pallister in 8:19.16. With three women going sub-8:20, Australia displayed superb depth in the 16-lap event.

As much as the Aussies would love a sweep of the women’s freestyle events, that scenario is highly unlikely to unfold when the 400 freestyle is contested on the last day of the meet. Canadian Summer McIntosh is entered in the event and is coming off a silver medal at the World Championships in Budapest.

The reigning Olympic champ in the 200 freestyle and 400 freestyle, Titmus has put in the work required to excel across three distance disciplines, and her personal best – albeit by a small margin – is evidence that she is still developing over the longest race. While Ledecky is in her own realm in the 800 freestyle, Titmus ranks ahead of legends such as Rebecca Adlington and Janet Evans.

Titmus never trailed during the race, but Melverton was within .16 at the 400-meter mark. Titmus, though, had a .57 edge at 500 meters and was more than a second in front at the 600-meter turn. Next, she’ll try to repeat her title in the 400 freestyle, with that event offering a challenge from McIntosh. The Canadian teen was 4:29 in the 400 individual medley earlier in the week and went sub-4:00 in the 400 freestyle at the World Champs. The question is whether she can go in the 3:56 or 3:57 range, which is likely where Titmus will be.