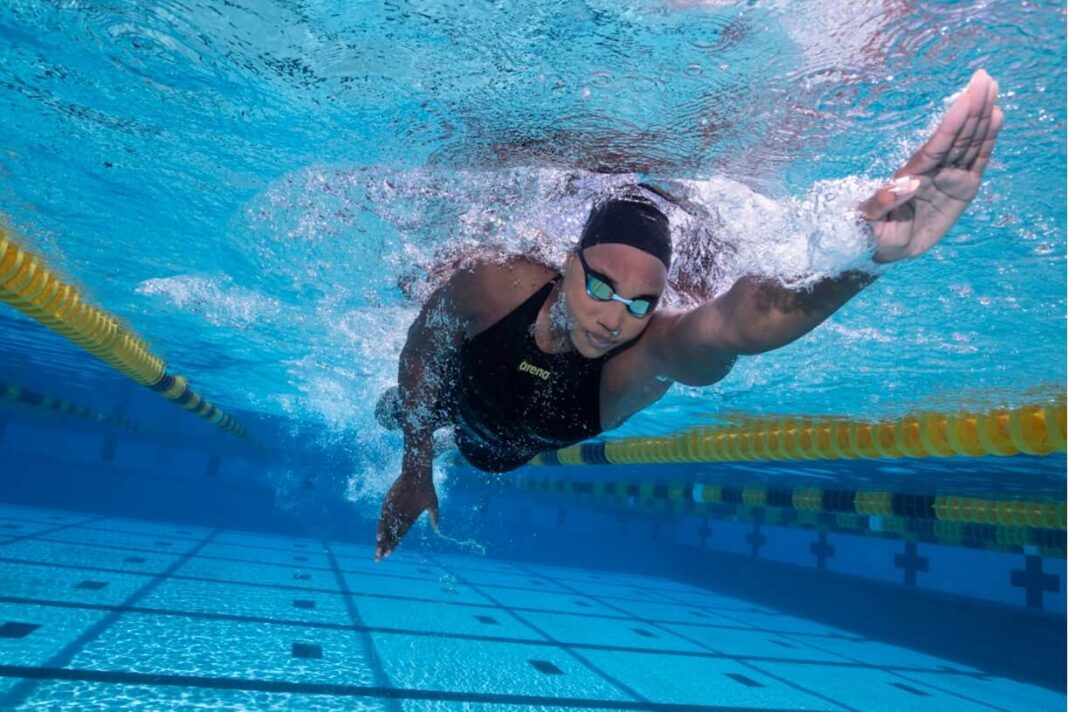 Manuel, has joined their team of elite swimmers, signing a sponsorship through to the 2024 Olympics in

“It’s so great to be teaming up with arena,” said Simone. “Going back to my first days as a professional

swimmer, I’ve always loved their gear, mainly for their performance, but also for their Italian style, and it’s

great to be part of a team that includes many of the world’s best. As I start a new chapter in my life and my

career, I’m looking forward to continuing my growth and taking my performance to the next level with

Following a much-needed break after the postponed 2020 Olympics in Tokyo, the 26-year-old from Sugar

Land, Texas, is now returning to the pool after making some key decisions about her future, including

signing with the renowned Italian swimwear brand. Simone is the current 50m and 100m freestyle

American Record holder, and, in 2019, set a new high mark for the most medals by a Woman at a single

for arena North America. “We love everything Simone stands for in and out of the pool. Like most

competitive swimwear brands, we pursued Simone early in her professional career and have always

regretted letting this amazing athlete slip through our hands” Pinger explained. “As the fastest growing

brand in the sport of competitive swimming, we’re a different company today than we were just a few

much, yet she’s only 26 and clearly has much more to give. We believe Simone to be an ideal ambassador

for the brand, and we’ll give her full support in pursuing her goals both in the pool and beyond.”

Simone started swimming lessons when she was four and soon showed great promise in the pool, while her

enthusiasm and athleticism helped her to flourish at soccer, volleyball, basketball, and dance. By the time

she graduated from high school, she had already broken an American Record in the 100 yard freestyle,

going on to become a multi-time NCAA All-American and Champion for the Stanford Cardinals.

Simone made her Olympic debut at the 2016 Olympiad in Rio. She made history as the first African-

A year later at the World championships in Budapest, Simone won 5 gold medals, including the 100m

freestyle with a come-from-behind victory in 52.27s. Four relay golds followed, 3 of them in world record

In 2018, she turned pro and, in signing her first sponsorship agreement, set a new precedent by

incorporating an inclusion rider in her contract, the first of its kind in the world of professional sports.

and 100m freestyle at a World Championships. She ended up winning a total of 7 medals in Gwangju, the

most-ever in history by a woman at a single World Championships, in the process setting two new World

and Overtraining Syndrome hampered her preparation for the postponed 2020 Olympics in Tokyo. Despite

missing out on qualification for the 100m freestyle, she courageously qualified for the team in the 50m

Following a much needed mental and physical break from the sport following the Tokyo Olympics, Simone

to move to Arizona in order to train with the Arizona State pro group under head coach Bob Bowman. The

move signals a new beginning for her, and it coincides with her decision to team up with arena, signifying a

Beyond the pool, Simone’s work has been focused on expanding opportunities for others. She co-founded

media and commerce company, TOGETHXR and has partnered with multiple organizations on programs to

provide resources and aid to underserved kids and families, invested in teaching anti-racism in all forms and

actively promoted inclusion in swimming. She has served as an ambassador for USA Swimming’s Make A

Splash initiative and in 2019, she partnered with Lebron James’ Promise School in Akron, Ohio, piloting a 4-

week summer swim program for students of the school. Early next year, Simone will launch The Simone

Manuel foundation, with programming and grants focused on expanding her work around inclusion and

wellness, throughout an extended network of schools and community organizations.