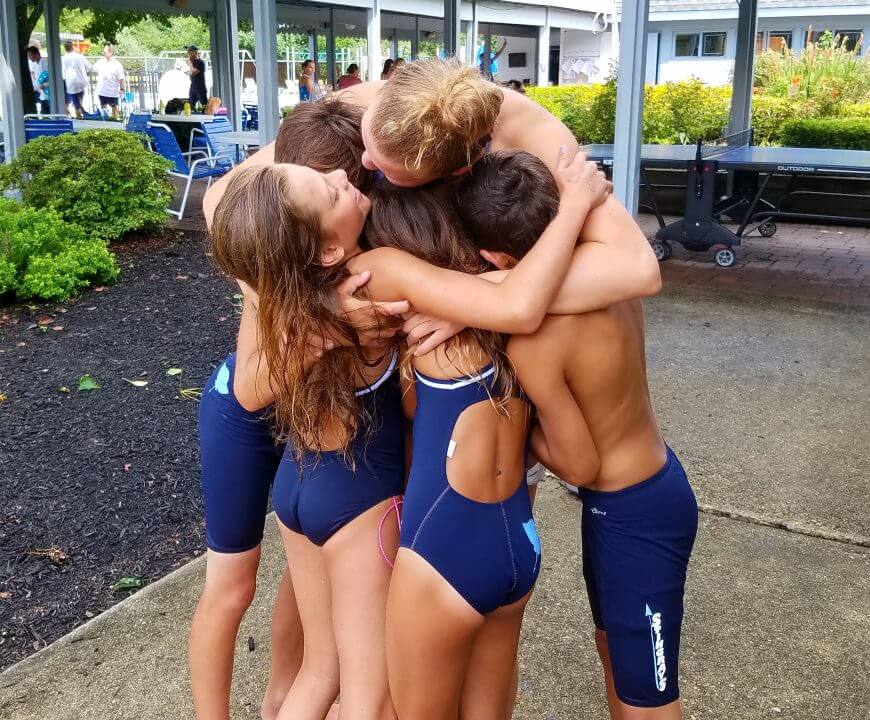 With the summer league season wrapping up in many parts of the country, we rerun this commentary from the Swimming World archive that provides tremendous perspective on the meaning of the summer campaign.

The palms of your hands grip your elbows, eyes wandering up and down the length of the pool. You triple-check the event, heat, lane and stroke grid etched in Sharpie on your arm to ensure you’re in the right place. Your head frantically moves back and forth trying to find your coach. Tears stream down your face as the coach kneels at your side asking, “What’s wrong?”

The coach agrees to swim that seemingly mile-long trek with you down the pool, but your tiny body is still trembling. You make eye contact with George Washington on the one dollar bill waving in front of your lane as your incentive to hop in. Sunburned skin touches the cold water; you hear a soft hush and an air horn; you spin your arms like little windmills; then you touch the wall with your coach at your side.

You hop out and skip off to buy a lollipop with your heat ribbon and dollar in hand.

This is a common experience for developing swimmers – the tears never last long and the memories last a lifetime. For many young swimmers, summer swim league entails a few weeks of pasta parties, ice cream socials, swim meets and fun. But for others, it is the beginning of their swimming careers.

No matter the reason for taking part, the lessons learned from summer swim league are the same across all lanes. Summers by a pool and underneath the hot sun allow you to develop long-lasting friendships with teammates, swimmers and families. These friendships grow from endless hours of playing cards on picnic blankets between events and all-day meets, cheering for teammates and embracing with wet hugs after races. You never forget to write “Eat My Bubbles!” in permanent marker on each other’s backs and to pull on bathing suit straps for good luck. As the years progress in summer league swimming, the water that once sparked fearful tears becomes your home. One day, it will be remembered as your second home.

Dave Eldridge, Junior National champion and Olympic Trial qualifier, began swimming summer league at age five when he was thrown in the pool and told to go! Taking that jump into the pool grew Eldridge’s confidence in the water- a confidence that he could one day pass along to the thousands of swimmers he has influenced as a club team coach. He recalls, “As a coach, summer league is where most of our swimmers start and continue to swim. Many, if not all, of my YMCA National swimmers started in summer league.”

Years later, swimmers tend to reflect back and see summer league as the place where it all began. Even throughout the course of just one summer season, nerves give way to excitement during team cheers, and “cant’s” become “wills” in the pool. Developing Love for the Water

The laid-back atmosphere of summer league swimming helps develop the love for the sport and the water. Sitting crisscross applesauce waiting to be marshaled and enjoying all of the team spirit activities that surround the league helps swimmers to begin the true love for swimming. Whether this love develops into a “love/hate” relationship is up to the swimmer to decide. Having Fun in the Sun

Summer league is a reminder that swimming is more than the competition – it’s the memories, joy and laughter. Before Olympian Tom Wilkens began swimming at age five at the Middletown Swim and Tennis Club in New Jersey, he was afraid to put his face in the water and get his head wet. Almost twenty years later, Wilkens won a Bronze Medal in the 200 IM in the 2000 Sydney Olympics.

He reflects on the start of his swimming career, saying, “I think summer league provided the perfect foundation for my success as a swimmer, as the focus is on development and improvement, having fun while racing, and competing as part of a team. During the entirety of my career, the things that kept me motivated were the camaraderie I had with my teammates, the joy I felt while swimming and racing, and the opportunity I had to improve every day.”

For many summer league swimmers, those fun moments and memories may include the following: sticking ribbons on your arms like temporary tattoos, holding each other’s hands so you don’t get lost being led to your lane, dressing in funny costumes at championships, receiving awards and feeling proud over a paper plate, indulging in well-deserved Munchkins on those early mornings, and laughing when you forget to place your vibrant-colored goggles over your eyes.

One of the most important concepts for summer league swimmers is that accomplishments are defined differently for each swimmer. Making comparisons between the fastest and the slowest is insignificant. Instead, achievement should be felt and appreciated in various forms based on the individual athlete. 1992 Olympic Trial qualifier and club coach Ken Dunlap followed suit behind his older siblings who swam for a summer league team. He notes, “Success can be winning the 25-yard freestyle, but it can take on more subtle forms as well. For example, success might be completing a lap of breaststroke legally for the first time.”

Many swimmers who stick with the sport eventually become coaches one day. Wilkens, who is a coach and father to two young swimmers, discusses how it feels to come full circle: “As a parent, I am proud that my kids chose to swim … because I love this sport and think that it teaches kids so many great lessons. As a coach, I feel fortunate that I can give something back to the sport that gave so much to me.” As you grow up, you see yourself in the younger swimmers you coach: the timid swimmer afraid to get in the pool; a hungry swimmer who brings a chicken nugget behind his lane; that swimmer who tugs on the legs of coaches; sometimes the swimmer who goes missing right before racing time; the swimmer who starts the team chants and cheers; and the swimmer who wants to be a coach someday.

At one point, you were once a young summer league swimmer. And one day, these kids will grow up to be the coaches and influencers of the sport we love so much.

-All commentaries are the opinion of the author and do not necessarily reflect the views of Swimming World Magazine nor its staff.

A Luxe Scent for Less| Well+Good

Pogacar the pragmatist – Tour de France champion prepared for the worst, inspired by the best