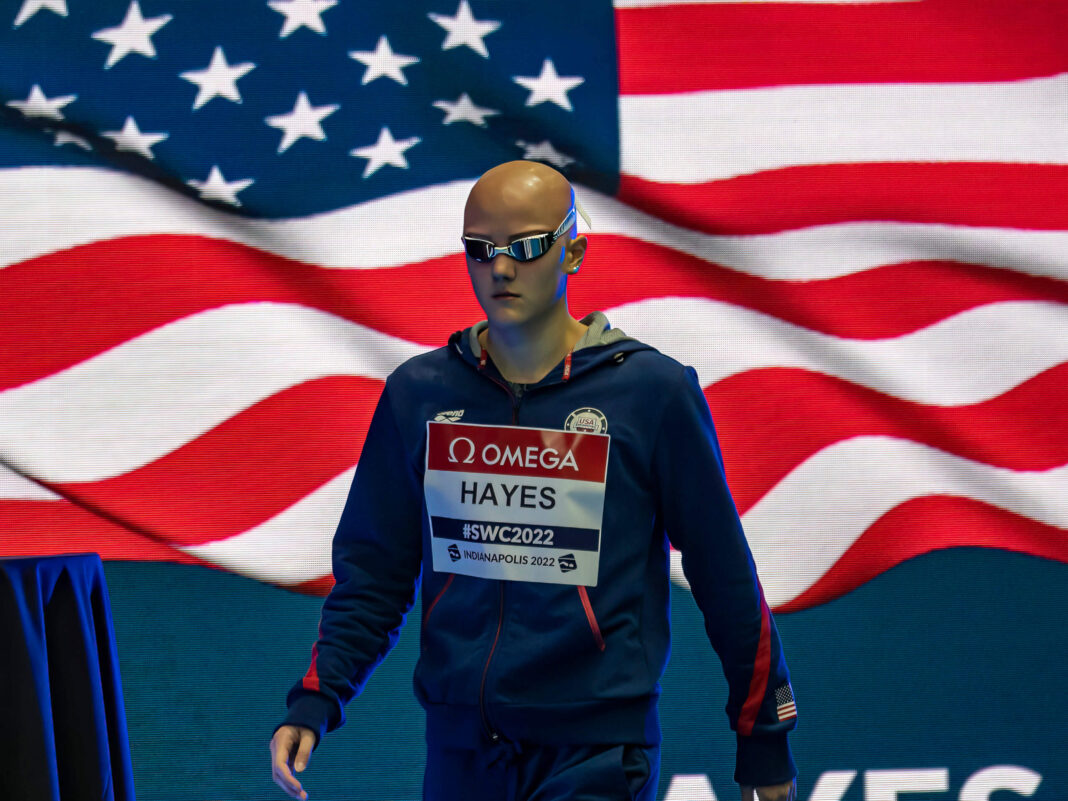 These days, Hayes remains a precocious youth. But the 17-year-old is also a global presence for Team USA, having earned her first international medal over the summer, and is a leading contender to nail down a bid to the 2024 Olympic Games in Paris. For her efforts during the 2022 campaign, Hayes has been named World Newcomer of the Year.

When the United States held its International Team Trials in April, Hayes was dealing with a stress fracture in her foot. Despite the injury, Hayes qualified for the summer’s World Championships in Budapest in the 200-meter individual medley, as she finished behind Olympic medalist Alex Walsh. The effort was merely a step to a grander achievement.

At the World Champs, where Walsh earned gold, Hayes made it a pair of Americans on the podium, as she captured the bronze medal in a career-best time of 2:08.91. Hayes’ performance also established a world junior record and an NAG record in the 15-16 classification.

Hayes put together a patient and well-designed race on the way to her first international medal. Sixth after the opening butterfly leg, she moved up to fourth at the midway point. By the end of the breaststroke leg and 150-meter checkpoint, Hayes was in third place, and maintained that position on the closing freestyle leg. At the finish, Hayes was just .34 back of Australian silver medalist Kaylee McKeown.

“I’m just so happy, “Hayes said. “I’m overwhelmed. It’s extraordinary, and I’m so honored to represent the United States of America at the World Championships. (To medal with Walsh), that was my dream, to lead our country and to podium with such an extraordinary swimmer. She has been so helpful to me and given me so many great words of advice.”

Already committed to the University of Virginia, Hayes is expected to make an impact for the United States in additional events in the future. While the 200 medley figures to remain her prime discipline, Hayes has the potential to represent Team USA in the 400 medley and 200 freestyle, the latter event offering relay opportunities.

Beyond the pool, the rising American star has been an inspiration. Diagnosed with Alopecia as a six-year-old, Hayes has not shied away from the disease. Instead, she has embraced her identity as a way to educate and encourage.

“I was diagnosed at a pretty young age, so I’ve learned to deal with it,” Hayes recently told NBC Sports. “It is a part of me, and I live confidently with it. When I swim, I don’t wear a cap because I want to bring more awareness to alopecia, but I also hope to inspire other girls who may have the disease or other people with physical differences that anything is possible. Your differences don’t limit you.”

Tai Chi for Those Who Hate to Exercise — TaiChiUSA

The Zwift Hub is about to transform the smart trainer market