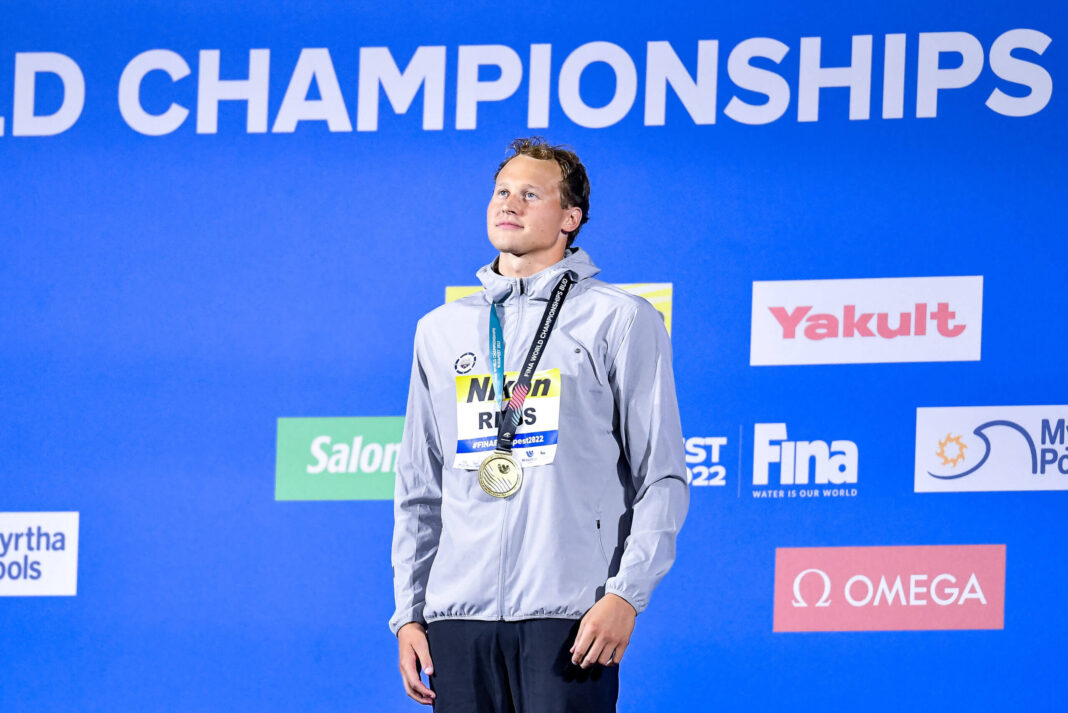 Imagine this scenario: you are the world-record holder and the gold-medal favorite, and you just won your first individual world title — and you feel agitated and dispirited. That’s the scenario Hunter Armstrong faced Saturday evening as he walked through the hallways of Duna Arena. Minutes earlier, he had celebrated a 1-2 finish with U.S. teammate Justin Ress in the men’s 50 backstroke final, but after a brief video review, Ress was disqualified for completely submerging on his finish.

In a post-race television interview with NBC Sports, Armstrong made his feelings on the matter very clear: “I would have rather taken second and had him with me than having to get the title and the DQ. That’s not how I wanted it.”

However, after the U.S. squad launched an appeal, the DQ was overturned, and Ress was reinstated as the gold medalist. That happened after Armstrong, Poland’s Ksawery Masiuk and Italy’s Thomas Ceccon had received their medals, and FINA held a second medal ceremony to award the finishers their corrected honors. Ceccon dropped to fourth, and he surrendered his bronze medal on the way to swim the 400 medley relay, although it’s unlikely he left the pool too upset given that he led Italy to an impressive victory in the event.

Armstrong, meanwhile, had no qualms about surrendering the gold medal. On his Instagram story, he wrote, “Congrats to the real world champion!” And Ress was very appreciative that his teammate in the event was by his side the entire time.

“Hunter has honestly stunned me with his maturity today and his constant support,” Ress said. “From all the way through right after the race, he said, ‘You need to do an interview with me.’ I was too sad or mad to do it, of course, so I didn’t. I mean it’s just been nonstop support the whole time. It was unreal.”

It’s unclear exactly what evidence was presented to overturn the call. Watching real-speed replays of the race, it’s unclear whether or not Ress was completely submerged at the finish. But regardless, in the moments after the initial call was made, many questioned why the rule even exists. It’s not as though going underwater at the finish is faster, right? Ress came close to dipping underneath because he had a long finish, which likely cost him a margin of victory larger than two hundredths.

Actually, the rule is connected to the requirement for backstrokers (as well as freestylers and butterflyers) to not be submerged past 15 meters off each wall, a rule instituted in response to swimmers in the 1980s and 1990s (such as David Berkoff and Denis Pankratov) going much further than 15 meters underwater to gain an advantage. Litigating swimmers’ finishes was not the initial idea, but that has been the result across all levels of the sport. Of course, the rule doesn’t get the same level of objection as the delay-initiating-turn rule in backstroke (which does not even exist on the high school and college level in the U.S.).

Thankfully for Ress, FINA was able to review the call and overturn it, and this minor rule did not cost Ress a world title. After all, this was a breakout moment for the 25-year-old who swam for North Carolina State University. Ress has been competing at a high level for several years, with a sixth-place finish in the 50 back at the 2017 World Championships and a handful of World University Games medals on his résumé, but he has struggled to consistently break through to the major stage. It would have felt wrong for this moment to be taken away from him.

“I almost retired in December,” Ress said. “I moved from North Carolina to California. Really just grew as a person so much more than I ever have, and that just translated to being an athlete as well, and just to see it come together like that is an incredible feeling.”

That growth has paid off this week for Ress with tangible hardware. His gold medal in the 400 freestyle relay on day one in Budapest was the first medal of his career at a World Championships. After an emotional ordeal, this 50 back gold was his second.

Inside the mind of a Billionaire with @Finance With Sharan | ft. Nithin Kamath, Founder of Zerodha

This Code Word Strategy Has Our Attention