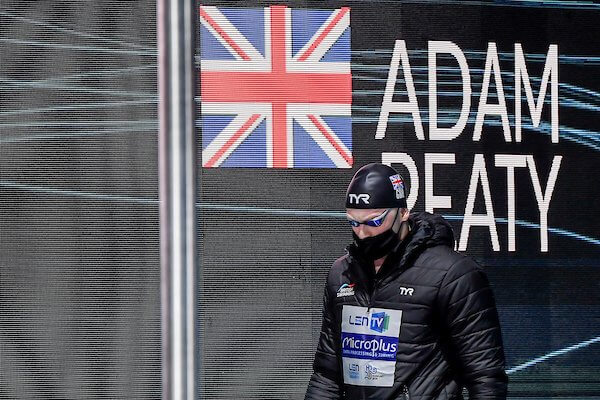 Adam Peaty has confirmed he won’t compete at the European Championships while James Guy and Alys Thomas have also withdrawn from the meet in Rome.

Peaty finished fourth in the 100 breaststroke on his return from injury at the Commonwealth Games before winning the 50br for the first time.

The three-time Olympic champion made it clear it was his final Commonwealths while also stating he wouldn’t be competing in Rome where the Olympic silver and bronze medallists, Arno Kamminga and Nicolo Martinenghi, await.

Guy won six medals at Birmingham 2022, including gold with Team England on the medley relay, and he too has opted out of what would be his third competition of the European summer following the World Championships and Commonwealths.

Thomas didn’t compete in Budapest but came sixth in the 200 fly in Birmingham.

With the trio confirming they won’t be involved at the Foro Italico, Imogen Clark and Holly Hibbott have been added to the British squad.

Clark won silver in the 50br in Birmingham while Hibbott was a finalist in the 100 and 200 fly.

“Adam, James and Alys have our full support in deciding not to go to Rome as they look to have an important break from the water and reset for the next season.

“For the team as a whole, this is the final competition of a unique summer in the pool with three major meets so close together.

“We have been impressed with our athletes’ performances in the water to date, and we know it will be the same again as they take on a strong field across the European nations.”

“Imogen and Holly both enjoyed positive meets at the Commonwealth Games, and we look forward to seeing how they can build on those performances at Europeans.

“Relays will be a key focus for the team in Rome and both have great experience to add to our young team.”

The pool programme will run from 11-17 August.