The cross country is back! – Irish round-up 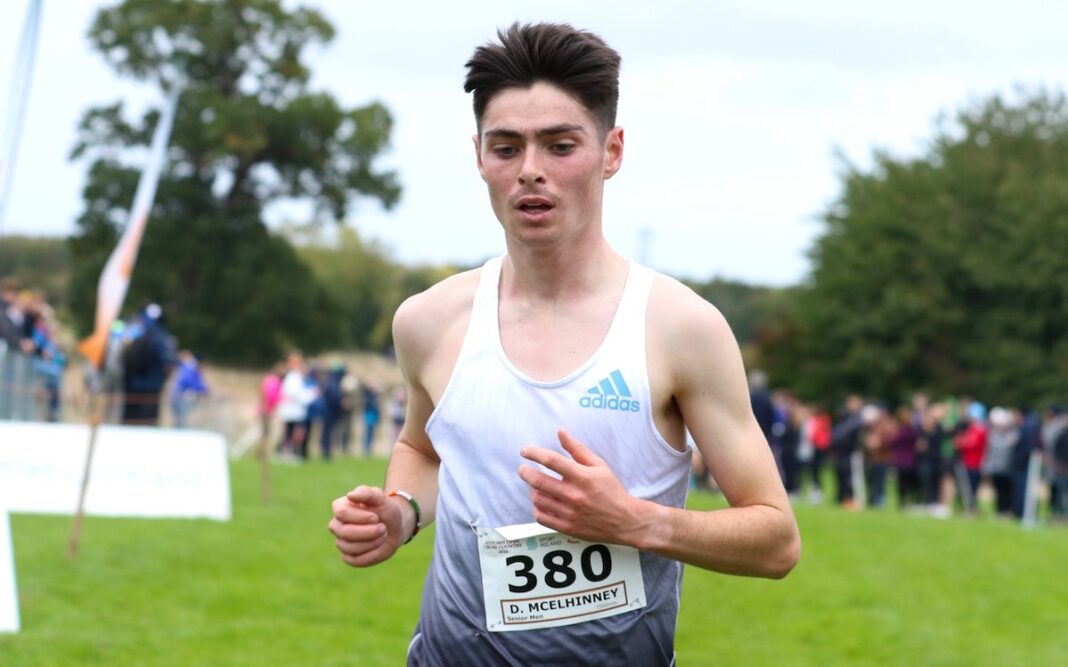 Cross-country is back and, once defrosted from a day in the rain cheering runners on, Lindie Naughton reports on all the action in the mud and on the roads.

For a second year, Darragh McElhinney and Abbie Donnelly were the winners at the Autumn Open Cross-Country held at Abbotstown in Dublin on Sunday (October 16).

Donnelly, who finished the 6km course in 20 mins 8 secs, was leading a team of five from Loughborough University. Grace Carson, wearing Loughborough colours but also a member of Mid Ulster AC, was second in 20:13 and Alex Millard, also Loughborough. third in 20:23.

From the start of the men’s 7.5km race, McElhinney, the European U23 silver medal winner at the same venue last December, was clearly the one to beat. He set out at a brisk pace, with only Dean Casey of Ennis TC and Keelan Kilrehill of Moy Valley AC managing to stick with him through the laps.

In the end, McElhinney stretched away to win in 22 mins 16 secs, followed by Kilrehill in 22:24 and Casey in 22:31. Running a solid race to finish fourth was John Travers of Donore Harriers. Winning the 6.4km junior men’s race was Sean McGinley of Finn Valley AC while first of the junior women was Avril Mellerick of Youghal AC.

As has become traditional, the races served as trial for the British and Irish Masters’ International , which, after a two year delay, will finally come to Santry on Saturday November 12.

First of the master men was Brian Maher of Kilkenny City Harriers, now in the M45 age group and a former winner at the British and Irish masters international. Best of the women was the steadily improving Sinead O’Connor of Leevale AC, who was seventh overall in the women’s race.

In the UK, Mary Mulhare of Portlaoise AC finished tenth in the women’s race at the British Cross-Challenge opening round in Cardiff on Saturday (October 15). Mulhare completed the 6.4 km course in 21 mins 32 secs.

Like the senior women, the U20 ran 6.4km, with Niall Carberry first home for Clonliffe in 27th place with a time of 20:35, followed by Ronan Donohoe 43rd and Cian Murray 45th.

Best Irish results on the roads over the weekend came at the Great South 10-Mile in Portsmouth, England on Saturday (October 15).

Locally, Aoife Cooke of Eagle AC finished fourth overall in the Stone Mad Blarney Half Marathon in Co Cork on Sunday. Ahead of her was race winner Denis Hegarty in 69:43, followed by Mark Smith 72:25 and Barry Donovan 73:50. Cooke finished in 76:36. Second woman was Laura Rooney in 85:46, while third was Linda O’Connor in 86:23. Also on Sunday, Gavin Kenny and Lizzie Lee were the winners at the Defence Forces BHAA 5km in Cork. A day earlier, Sean Hehir of Croghan AC, was the winner of the Donadea 10km in Co Kildare on Saturday (October 15).

Hehir’s time of 31 mins 42 sec saw him finish with eight seconds to spare over Graham Gilshinan of Portmarnock AC. Just six days earlier, Gilshinan had finished second in the Irish 3/4 Marathon. In third place was Barry Whelan in 33:36.

Sarah Mulligan of Dundrum South Dublin AC, a former winner of the Snowdon International Mountain race, was first woman in 37:26. Niamh O’Connor was second in 38:27 and Aisling O’Connor third in 40:16.

Despite the course being stretched out to 5.25 miles on the day due to severe weather conditions, Donal Coakley of Leevale AC still broke the course record at the Bere Island 5-Mile, Co Cork also on Saturday.

Coakley’s time of 30 mins 21 secs saw him finish well clear of Eoin Keegan from Raheny Shamrock AC who crossed the line in 32:01. Third in 32:30 was Shane Harrington of East Cork AC who was also first M40.

First women in 39:31 was junior athlete Michelagh Murphy. Rhona Dempsey of St Finbarr’s AC was second in 38:58 and Anna O’Neill of Doheny AC third in 43.00. The race was part of the Beara 5 mile series with the concluding race in Eyeries on Saturday, November 12.

Josh O’Sullivan-Hourihan had almost a minute to spare when winning An Cosantoir 10km in Dublin’s Phoenix Park on Wednesday (October 12); a race confined to military personnel, current and past.

O’Sullivan-Hourihan finished in 30 mins 58 secs; second in 31:57 was Conor Tiernan, while third was Paul Mitchell in 32:56. Fifth and first master in 34:12 was Paul O’Beirne. David Redmon in seventh place was leading 2 Brigade 27 Inf Bn to team victory.

First woman was Tahlia Britton in 39:04. First finisher at Saturday’s Belfast Victoria Parkrun, with a time of 14 mins 15 secs, was Irish junior international Nick Griggs of Mid-Ulster AC. The time is a new parkrun Junior Men 15-17 age group record. It was a first parkrun for Griggs.

Ben Branagh of St Malachy’s AC, a parkrun regular, was second in 14:22. The course is ranked fourth fastest of UK parkruns.

A large number of Irish athletes were in action at the Nuttycombe Invitational in Madison, on Friday (October 14), where Michael Power of West Waterford AC finished eleventh in the men’s 8km in a good time of 23 mins 25.2 secs.

In a closely-packed race, Shay McEvoy of Kilkenny City Harriers was fourteenth in 23:26.5, followed by Cormac Dalton of Mullingar Harriers 19th in 23:28.1 and Brian Fay of Raheny Shamrock AC 34th in 23:37.5.

Barry Keane of Waterford AC finished second in the men’s 8km at the Weis-Crockett Invitational in Stillwater, Oklahoma. Evan Byrne of Togher AC was 26th in 24:08.8.