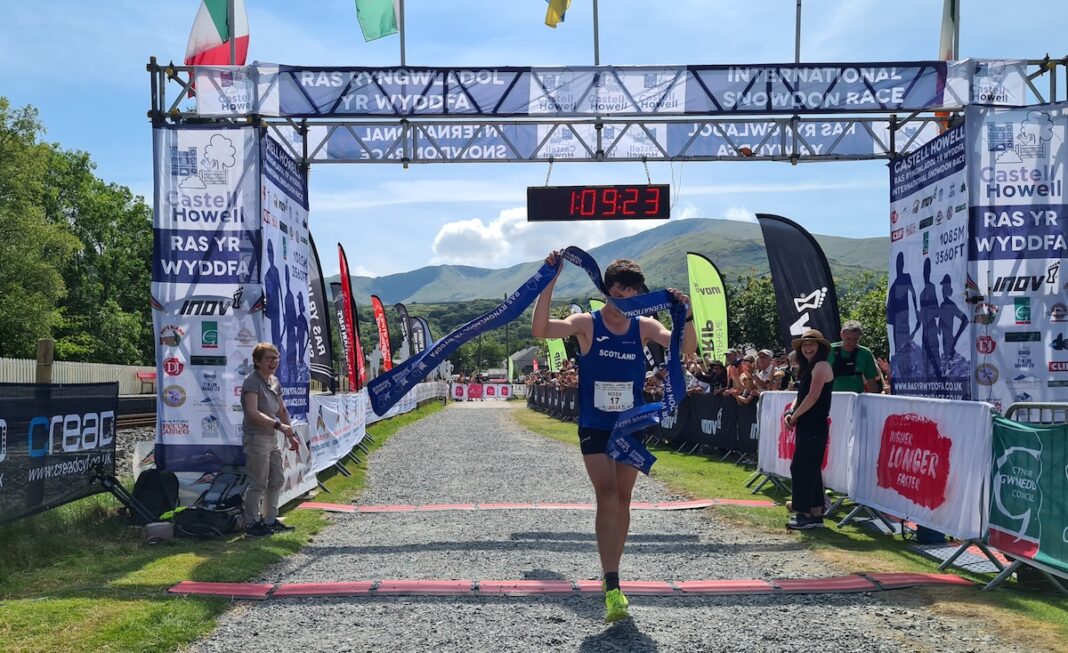 The iconic Mountain Race which starts and finishes in Wales’ outdoor Capital, Llanberis, returned for the first time since 2019 on a day characterised by intense heat but with conditions unable to prevent around 600 determined distance runners scaling Wales’ highest Mountain.

The race once again hosted an international competition between England, Ireland, Northern Ireland, Scotland, Italy and Wales. Italy have a great history in this race and at the halfway up point, it was Luca Merli who led but by the time the summit was reached, it was Nathan Edmundson who claimed the prize for being first to the top.

It was Scotland’s Ross Gollan that proved the best on the descent however, following fellow Scotsman Andrew Douglas’ example and claiming the title that Douglas has held since before the Covid-19 pandemic. Gollan’s victory at the 10 mile race came in 1:09:21.

Gollan commented; ‘I took it steady on the way up and was mindful of the heat because as soon as the heat gets you, there’s no coming back from it’.
‘It hasn’t really sunk in yet to be honest I came here with probably no expectations. I’ve had a pretty relaxed few weeks with illness and travelling so it’s definitely an honour to win this race. I was saying earlier that to do it for Chris (Smith) is really special’.

Gollan’s reference to Chris Smith was in honour of the 2016 race winner who sadly passed away in 2020 at Glen Lyon in the Perth and Kinross region of Scotland. England were convincing team winners in the men’s race led home by fifth placer Ben Rothery.

It was also England that provided the first two athletes in the women’s race where Hannah Russell led home team mate Sara Willhoit after passing her on the way down, in the words of Willhoit, ‘with absolute grace’.

Russell had competed as an U20 in nearby Bettws Y Coed for the 2015 WMRA World Mountain Running Championships.

Her victory here came in 1:18:48 with Willhoit clocking 1:19:12. Scotland’s Holly Page was third in 1:19:27, unable to prevent England claiming an emphatic team title.

‘I could never have imagined that when I started the day’ said Russell. ‘I thought I would start of steady and see what happened’. North West Shows Her Siblings How to Make a Milkshake