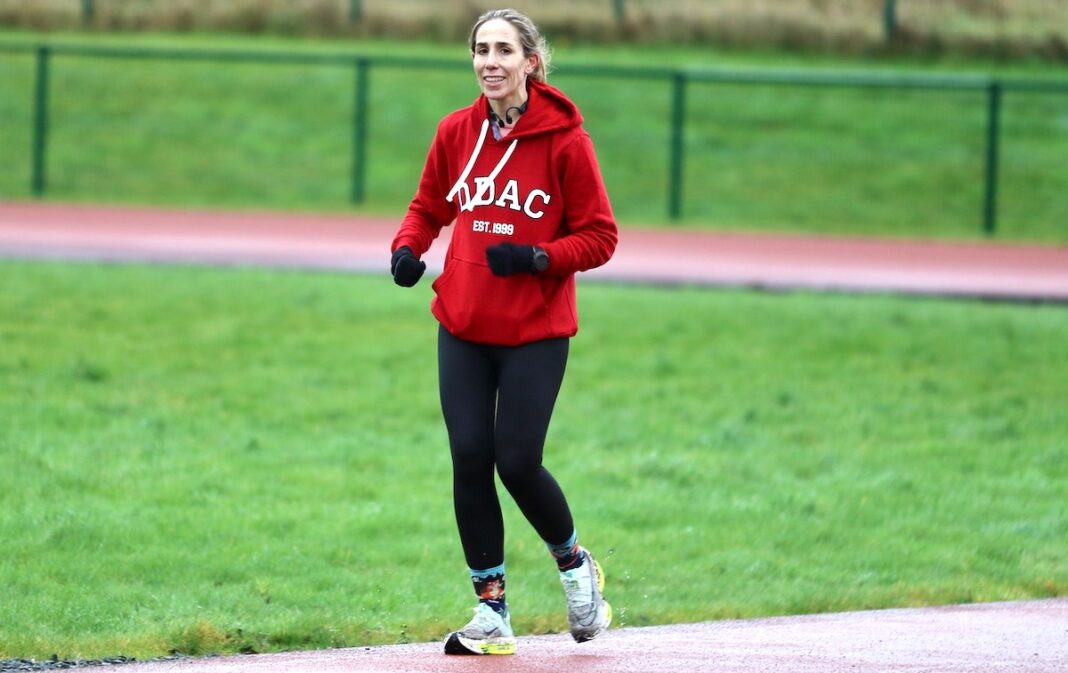 While most of us were cracking open the fizz and singing Auld Lang Syne to celebrate the New Year, ultra runners were on their way to five Irish records at the Ireland Across the Years 24-Hour race in Leixlip.

As hinted by its name, the event started on 31 December 2022 (12 noon) and ended on 1 January 2023 (12 noon) at the Le Cheile track in Leixlip, Co Kildare. The event was the idea of Anthony Lee, the race director and timer, who is also the man behind  the successful Donadea 50K.

A key feature of the event was the prize money on offer for Irish records ove a number of recognised ultra distances which meant a brisk pace in the early stages of the event. The first record to go was the women’s best for six hours, with Tricia McLoughlin of Le Cheile AC covering 74.049km in that time. McLaughlin pushed on to cover 124.459 km for 12 hours, which was another Irish record.

Mundow sees out the full day

Aoife Mundow, the Irish women’s 24 hour record holder from the Drogheda and District club, was also in record breaking form covering 100 miles in 16:38.25. Unlike McGroarty and all the men, she decided to battle on and by the end of the 24 hours, she and Susan Morrissey were the only two left standing. Mundow completed a distance of 211.2 km, while Morrissey, who took a mid-race break, completed 133.2 km.

A total of seventeen had lined up at the start of the ultra runs. A further 29 completed the first of two marathons, with Rolando Espina the winner in 3:33.54.06 and Joanne Rice from Navan AC first woman in 3:49.19. In the second marathon, which started at 9pm, Keith Russell of DB RC ran into the New Year in 3:09.15.

John O’Regan spoke to Fast Running after the event and told us “the idea behind this race was to help promote and also improve the standard of ultra-running in Ireland. It was great to see the number of records broken on the day and hopefully going forward it will encourage more people to step up and go beyond the Marathon. ”

The hunt is now on for competent marathon runners to make up Irish ultra running teams over the next twelve months. A highlight in 2022 was Caitriona Jennings’s victory in the European 50km Championships, where Sorcha Loughnane was also running. Ireland could also have taken team gold, but lacked a third member for the team. If you’re interested,  John would love to hear from you.

He’s hoping Irish men and women’s teams can compete in a number of events this year starting with the Anglo-Celtic Plate100km in Craigavon, Co Armagh, on Sunday 2 April.

Over the shorter distance of 5km, Abdel Laadjel of Donore Harriers, home on a break from his US college, won a thrilling Tom Memorial 5km in Dublin’s Phoenix Park.

In the sprint for the line, Laadjel just held off Stephen Cashin of Clonliffe Harriers and Colin Maher of Ballyfin AC with the trio timed at 14 mins 54 secs, 14:55 and 14:56.

The women’s race was less of a nail-biter, with Edel Monaghan of Dublin City Harriers a clear winner in 17:07. Lauren Murphy of Cilles AC was second in 18:22 and Ciara Wilson on DMP AC third in 18:24.

Winners of the FASN 5km in Dundalk, Co Louth were Donnachadh Mac Aodha of North East Runners in 15:38 and Trim AC’s Edel Gaffney in 17:44.

Irish mountain running international Zak Hanna of Newcastle AC began his year on a positive note with victory at the annual Race Over the Glens at Glenarriff Forest park organised by Ballymena Runners.

On the tricky off-road course, Hanna pushed the pace from the start and finished over two minutes clear of the chasers in 38 mins 42 secs. Second in 40:59 was Philip Goss of North Belfast Harriers while third was Jack McvKenna of the host club Ballymena in 41:37.

Making it a double victory for Newcastle AC was Aine Gosling who was the first woman in 48:22. Erin McConnell was second in 49:24 and Tara Waalker of Shettlewstown Harriers third in 52:04. Among the 364 finishers was Ian Taylor, former president of Northern Ireland Athletics.

On the last day of 2022, Andrew Annett of Mourne Runners, wearing the No 1 bib, led home 544 finishers at the Lough 5-Mile in Loughmacrory in Co Tyrone, with a time of 25 mins 44 secs. Peter Donnelly of North Belfast Harriers was second in 26:16 and Tristan Kelly of Finn Valley AC third in 26:44.

Fourth and first junior was Kyle Thompson of Loughview AC in 26:59 while fifth and first M40 was Olympic race walker Colin Griffin of Ballinamore AC in 27:01.

Grainne O’Hagan of Knockmany RC was first woman in 30:40, followed by Niamh Heaney in 32:00 and Eimear McCarroll of Finn Valley AC in 32:25.

Tudor Moldovan of Clonliffe Harriers won the Ardagh 10 Mile Challenge in Co Longford in a time of 53:18. First woman was Fiona Gettings of Longford AC in 63:18.

Patrick Noonan of Craughwell AC was the winner of the Resolution Run Galway 5km in 15:30. Second in 15:40 was Edris Abaas Adam of Castlegar AC. Sixth overall and first woman in 16:37 was Laura Mooney. For a second year, Ryan Creech of Leevale AC, in only his third race since getting over a serious back injury, came out on top at the Fermoy 10km. His time of 30 mins 16 secs was just 22 seconds slower than last year when Tim O’Donoghue pushed him all the way, writes John Walshe.

After missing his planned marathon debut at Wrexham last spring, Creech is now targeting the Seville Marathon on February 19 where he is hoping for a time around the 2 hrs 12 mins.

Sergiu Ciobanu of Clonliffe Harriers, third last year, moved up a place to second, with his time of 31:04 faster by ten seconds. Pat Hennessy of West Waterford AC returned to racing to take third in 32:11.

Niamh Mooore – like Creech, coached at Leevale by Donie Walsh – was an easy winner of the women’s race. Her time of 36:34 gave her nearly two minutes to spare over Angela McCann of Clonmel AC who finished in 38:23 with Keely Tideswell, also Clonmel AC, third in 38:32.

In Kerry, Niamh O’Mahony of An Riocht AC , home from Providence College where she took up a sports scholarship last August, notched up her second victory on the road in a week when winning her local Beaufort 10km in 35:49. Her Riocht clubmate Sharon Cahill was second in 41:19 with Caroline Murphy of Gneeveguilla AC third in 42:47.

Leevale AC’s Shane Collins was the race winner in 32:07. Winners of the 5km were Jack Curran of Leevale AC in 17:17 and junior athlete Louise O’Mahony of BMOH AC in 19:39.

On St Stephen’s Day, O’Mahony had finished first woman at the Farranfore 5km, one oldest road races in the country. Remarkably, Tom McCarthy, winner of the inaugural race in 1961 was on hand to greet the winners. Tom, now 86, is shown here with Niamh and is no stranger himself to the US running scene.

In the 1960s, McCarthy was one of the leading road runners in the New York area and in February 1965 won the Cherry Tree Marathon.

At the opening round of the Galway Cross-Country Series held at Renmore Fields, Sophie McIlrath and Declan O’Connor were the winners on the long course (4.6km). Winners on the short course (2.3km) were Patrick Lee and Caoimhe Kelleher. Next round is at Merlin Park on Saturday January 7 (11am), with entry still open.

Merit Beauty’s Great Skin Serum Is Finally Back in Stock