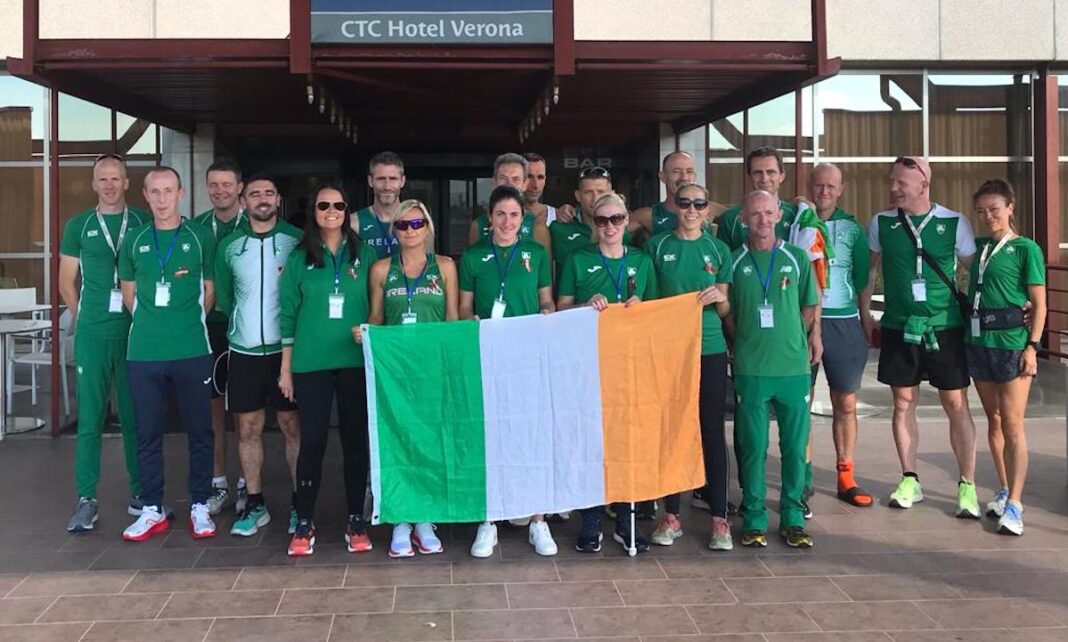 From the cross country to 24hrs and beyond, Irish athletes ran well this weekend. Lindie Naughton reports.

At the 28th Lupatotissima, also the European 24hr Running Championships, in Verona Italy, there was a strong Irish contingent with Ed McGroarty leading home the team with a new Irish record of 258.820km for 17th position overall.

Anne Jennings was the first female athlete home in 25th spot, covering 220.545km. It is quite likely that both team totals, of 740.382km for the men and 636.461 are the best we have seen by Irish teams, but if someone has better information then please do let us know.

First place saw a new world record for Lithuanian Aleksandr Sorokin, who covered an astronomical 319.614km in the 24hrs.

O’Connor and Lee battle it out

Sinead O’Connor of Leevale AC not only repeated her 2019 victory at the Cork Women’s Mini Marathon on Sunday (September 18), but set a new course record of 20 mins 34 secs for the 6km distance.

That knocked over half a minute off her winning time three years ago — the last time the race was held.

O’Connor, a primary school teacher, was pushed all the way by her Leevale clubmate Lizzie Lee, who finished second and was also inside the record of 20:48 set by Michelle Finn in 2018. Lee hadn’t run the race since 2013, when she ws winning it for a third time.

Finishing third was Hannah Steeds, who has won a number of local races over the past few months, and is currently transferring from Clonmel AC to Leevale after moving back to her native county.

Winner of the W60 category was the ageless Mary Sweeney of St Finbarr’s AC. Not too far behind Sweeney was Eileen Kenny, who was first W70. Kenny, a former Midleton athlete who now runs with Athlone IT AC, produced winning performances at both the European and World Masters Championships earlier this year.

In Co Antrim, Gideon Kimosop of the 1ZERO1 club in Enniskillen, was the winner of the Belfast City Half Marathon for a record fourth time in 66 mins 51 secs.

Kimosop, originally from Kenya, first won the race in 2015 and then again in 2017 and 2018. Finishing second behind Kimosop in 67:45 was Conor Gallagher, who last year finished a surprise second at the Belfast Marathon. Third in 70:43 was Chris Madden.

In a closely contested women’s race, master athlete Gemma McDonald of Ballycastle Runners came home first in 83 :26, followed by Niamh O’Connor in 83:41 and Leanne Gibson in 84:24..

In Dublin, the winner of the Griffith Avenue Mile was Hiko Tonosa of Dundrum South Dublin AC with a time of 4 mins 8 secs. Fifth and fastest woman was steeplechase Olympian Michelle Finn of Leevale AC in 4:35.

Finishing second overall in 4:18 was Michael Murphy while third and first M40 was Conor Curran in 4:31.

Behind Finn, sisters Sorcha and Íde Nic Dhomhnaill of Donore Harriers finished together in 4:37. First W40 was Ciara Peelo of Clonliffe Harriers in 5:13. Winners in the over 50 category were Ken Archbold of St Laurence O’Tool AC in 4:47 and Annette Kealy of Raheny Shamrock AC in 5:21. Over thirty athletes from Sanctuary Runners lined out for the point-to-point race along Dublin’s — and allegedly Europe’s — longest purely residential tree-lined avenue.

Toal, who was also first M50, finished in 16 mins 13 secs. Second and first M40 in16:53 was his clubmate Garry Mulligan, while seventh overall and first woman in 18:04 was Lauren Murphy of Cilles AC. Somba Makes It Four From Four

Dunboyne AC’s Peter Somba made it four from four at the Dublin Marathon Race Series when he won the Dublin Half Marathon in the Phoenix Park on Saturday (September 17).

Somba, who had won the Tallaght 5-Mile, Fingal 10km and Frank Duffy 10-Mile earlier this summer, pushed the pace from the start and finished in 67 mind 35 secs. Just fourteen seconds behind for second place was Portmarnock AC’s Graham Gilshinan in 67:35, while third was Celbridge AC’s Martin Hoare in 68:42.

Next up for Somba, who divides his time between Ireland and Kenya, is the Dublin Marathon on October 30

First woman in 78 mins 14 secs was the Donore Harriers veteran Barbara Cleary who was forced to work hard to catch and pass long-time leader Caitlyn Harvey of Annadale Striders AC.Harvey finished second in 78:24, while third in a personal best 80:40 was Jan Corcoran of Le Cheile AC.

Leading home 257 finishers at the Mediaeval Half Marathon in Kilkenny was Jason O’Byrne in 80 mins 24 secs. First woman was Marie Joyce of Clonliffe Harriers in 1:41.34.

In the 30km, Raivis Zakis of West Waterford AC was a clear winner in 1:53.13, with Isabel Oakes of Sligo AC first woman in 2:01.02. Winning the marathon in 2:38.16 was Enda Cloake of Slaney Olympics; Francine Copy was first woman in 3:17.17. Just a few weeks ago, Cloake was the winner of the Stone Cross to Lug mountain race in Co Wicklow, covering the 54km distance in 6 hrs 26 mins 1 sec.

Brendan Conway of Westport AC was the winner of the Clew Bay Half Marathon in Co Mayo with a time of 75:04. Laura Rooney of Watergrasshill AC was sixth overall and first women in 87:26.

Donal Coakley of Leevale AC was the winner of the Heart of Allihies 5-Mile, in Co Cork. Coakley finished in a time of 27 mins 2 secs; Michael McMahon was second and first M40 in 27:19 and Henry Browne of West Muskerry AC, third in 30:46. First woman in 36:05 was local athlete Deirdre O’Sullivan of Beara AC; Rhona Dempsey of St Finbarr’s AC was second in 36:17 and Anna O’Neill third and first W50 in 38:50.

Making it a home double at the third round of the An Ríocht Coillte 5km Series at Castleisland, Co Kerry on Friday (September 16) were Oisín Murray and Shona Heaslip.

Murray was a clear winner of the race in 15 mins 28 secs, with Heaslip third overall and first woman in 16:16. Just ahead of her in second place overall was Declan Guina of West Limerick AC in 16:12.

Winners at the Athletics Ireland GT5km Corporate Team Challenge 5km in Galway on Wednesday (September 14) were Thomas McStay of Galway City Harriers in 14:52 and Edel Kenny, running for the Genesys company, in 19:28. MIMICS-3D won both the women and mixed team categories; while the Rent the Runway team proved best of the men.

Galway Race Course was the venue for the 27th annual Castlegar Cross-Country where Ellen Moran of Galway City Harriers won the women’s 4km race in 14 mins 47 secs. Second and first W40 in 15 minutes exactly was Maria McCambridge of Dundrum South Dublin AC, while third and second W40 in 15:10 was Sarah Doohan of Corran AC.

Win For Mulcaire In The Usa

Kevin Mulcaire of Ennis TC underlined his return to good form this year when he won the men’s 8km race at the Texas Tech Open cross-country in Lubbock on Saturday (September 17), finishing comfortable clear of his University of New Mexico team mates Jonathan Carmin and Awet Yohannes. All three were making their debut for the college.

Mulcaire, aged 24, began his US college athletics career with Oklahoma State in 2017. As a juvenile in his native Co Clare, he had a brilliant career, winning schools titles both in cross-country and on the track, and setting an Irish junior 5000m record, later broken by Darragh McElhinney. He will race again in two weeks time. Winner in a new record time by almost ten hours of 123:57.18 was 52-year-old Sebastien Raichon of France. A total of 71 runners completed the course.

James Latimer finished fifth in the Nordkette Vertical held in Innsbruck, Austria on Saturday (September 17). Latimer took 62 mins 23 secs to complete the 6.7km course. He had been second in the first half of the race.

In a race dominated by master athletes, Nick Hogan was the winner completing the 14km course in 63 mins 47 with Seán Quirke of Bilboa AC second in 63:50. First woman in 68:41was Kealey Tideswell of Clonmel AC.