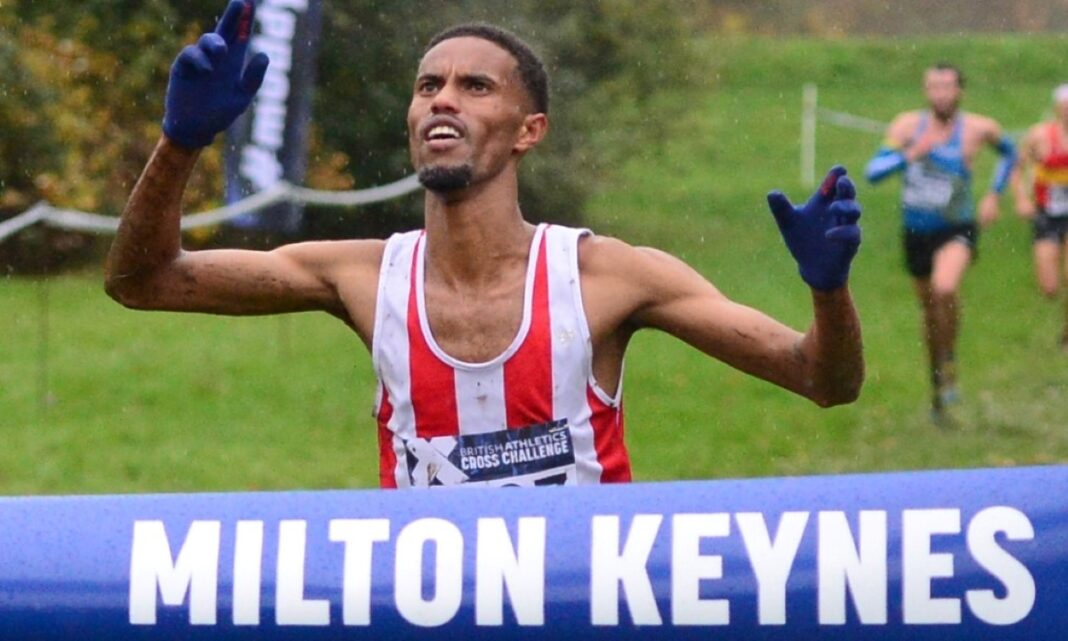 With a lull in the big road race calendar, cross country was at the sharp end of racing this week and nowhere more so than in Milton Keynes. Teardrop lakes was the venue for the British Athletics Cross Challenge, the Home Countries International, Chiltern League and a match between Oxford University and the RAF.

The weather was good and the ground was hard, resulting in some fast times. Mahamed Mahamed and brother Zakariya were back and forth at the front of the race. With 2k to go Mahamed pulled ahead and gained himself a six second lead to finish take the win Cross Challenge title 27:49. Zakariya was second in 27:55 and Alex George third in 28:16. Last year’s winner Hugo Milner was fourth (28:28) and Callum Elson fifth (28:49). England took the team win and all three medal positions.

Alex Millard made her move at the end of the second lap and raced home to victory in 24:13. Grace Carson (who trains with Millard) was second in 24:16. Last year’s winner Jess Gibbon was third in 24:20. Cari Hughes (24:29) and Eloise Walker (24:39 )placed fourth and fifth. England took the home countries win. Both winners will be hoping to represent their country at the Euro Cross challenge in Liverpool in two weeks’ time.

A busy week of league action

Edward Potter of Loughborough Students was first through the funnel at Birmingham League Division 1 in Stoke on Trent, running 28:34. It was the University of Birmingham who came out top in the team results, with Loughborough runners up. Manchester Area League at Kenworthy Woods saw Sarah Dufour-Jackson take the win for Vale Royal AC in 26:48, with Sale Harriers taking the team win. Joe Steward of Salford Harrriers was first home in the men’s race, running 29:33 and leading his team to the top of the team table as well.

The Met League headed to Wormwood scrubs – a classic course. London Heathside took the women’s team honours and Highgate Harriers the men’s. Alexander Lepretre was fastest in 24:05 and Rebecca Bunting (back from the Euro 50k champs) in 28:47. On Wimbledon Common the Surrey League saw Georgie Ggrec race home in 16:34. Marc Scott made a guest appearance to run 25:30, though Ian Crowe-Wright was fastest scoring male in 25:48.

Red Rose League at Burnley saw Carla Davies of Preston Harriers cross the line first in 19:15 but it was Hannah Lucas of Bury Athletic Club who was first scorer in 20:06, leading her club to the team win. Blackburn Harriers’ Callum Davidson was first man home in 29:22 and Rossendale Harriers came out top in the men’s. North Midlands League took place at Glebe Park, where George Phillips (Notts AC) ran 30.31 and Mansfield Harriers for top positions. Claire Frankland of Westend Runners clocked 21.44 and Derby AC won the team competition.

Road Racing around the Country

It was a rapid top three at the Battersea Park Half Marathon as Mohamed Hashi broke the tape in 69:57 followed by Chris Mason in 72:00, but it was Georgia Schwiening’s 72:08 for third overall which was the standout performance of the day. Elisha Tait ran 75:34 for a brilliant runner-up spot. Oli Lum(74:04) and someone recorded just as Patryca (78:20) were third.

Earlier in the week Wells City Harriers hosted the 193rd running of the Street 5k Series with 110 participants. Felix Rusby was the winner over 5 laps, clocking 15:51 ahead of Thomas Humphrey (16:03) and David Awde (16:06). Gill Pearson was winning woman in 18:30, with Alexandra Palolhai-Avel (19:36) and Amy Lavett (19:37) within a whisker of each other for the other podium places.

At the Tenerife Half Marathon the top three women were all GB athletes with Rachel Hodgkinson winning in 77:49, Sophie Wood second in 78:35 and Laura Barber third in 84:47.

At Wendover Woods 50 Jamie Rutherford was first to the finish in 8:05:44 followed by Scott Newburn in 8:20:04. Fiona Pascall (sister of similarly brilliant runner Beth) was third overall and first woman home in 8:33:44.

Congratulations to Fiona Pascall on setting a new female record for Wendover Woods 50 in a fast time of 8.33.44.#centurionrunning #centurioncommunity #WW50 pic.twitter.com/qyf7PERVF0

Tony Doherty Shares an Update on the Bodybuilding Landscape in Australia