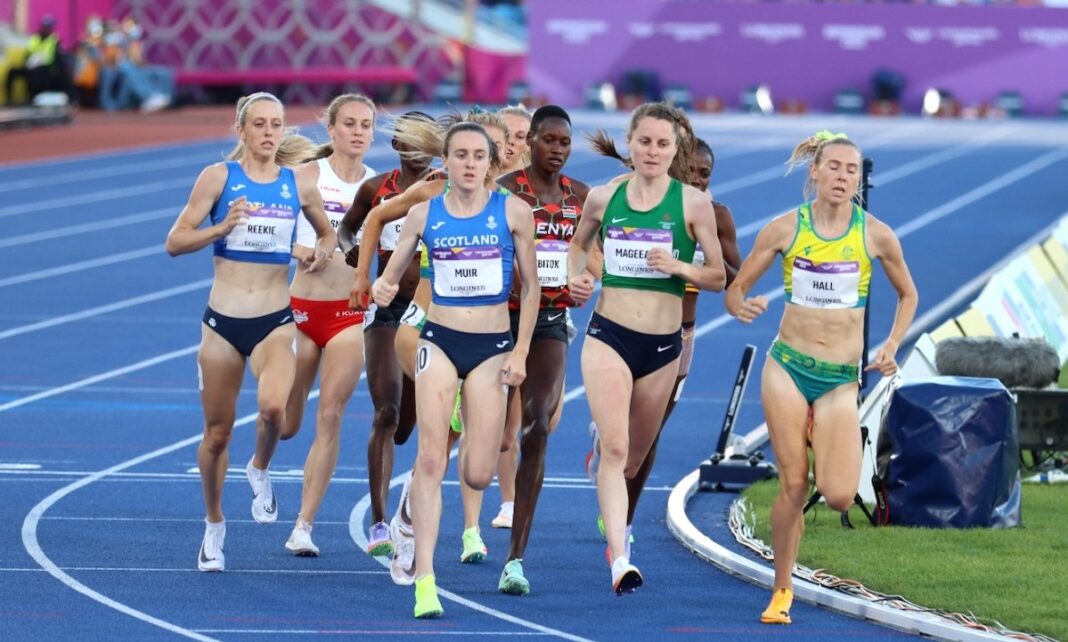 A silver medal for Ciara Mageean in the women’s 1500m brought Northern Ireland’s performance at the Commonwalth Games to a most satisfying conclusion.

Earlier in the week, multi-eventer Kate O’Connor had taken silver in the women’s heptathlon and Mageean was determined to do at least as well as her team mate.

She qualified easily from her heat; as did Scotland’s Laura Muir, the pre-race favourite. In the final, she moved swiftly to the front, controlling the pace. When Muir came past her, Mageean hung on right until the finish line. Muir was the winner in 4:02.75; Mageaan’s time of 4 mins 05.14 secs was a season’s best.

Later in the evening, Roisin Flanagan finished eleventh in the 5000m, clocking a personal best time of 15:26:76. The previous Wednesday, her twin sister Eilish had finished sixth in the 3000m steeplechase in 9:57.18.

At the World U20 Championships, in Cali, Colombia, Nick Griggs of Mid-Ulster AC finished ninth in a a quality 3000m in 8:04.22. In his heat, Griggs had finished fourth in 8:08.35 qualifying easily for the final, which was delayed because of torrential rain. Winner was Melkenah Azis from Ethiopia in 7:44.06.

Also at the World U20 Championship, Roisin Willis, whose mother Breda Dennehy Willis of Bandon AC represented Ireland at the 2000 Olympics in Sydney, won the women’s 800m in a personal best time of 1:59.13.

Willis, who had an outstanding high school athletics career, runs for the USA and will attend Stanford University in Palo Alto, California this autumn.

Locally, the highlight of the final Dublin Graded Track and Field Meet at Lucan was a time of 8 mins 23.02 secs for Jack Fenlon of St Abban’s AC in the grade A 3000m. As well as the 3000m, grdaed races over 400m and the mile distance were held, as well as a shot putt competition.

Darragh McElhinney of UCD AC improved his own Irish U23 3000m record 7 mins 42.86 secs at the Italian International Meet in Nembro on Tuesday night (August 2).

McElhinney knocked over a second off the time he ran at the Cork City Sports last month, producing a a blistering 53 second last lap to win the race from Italian athlete Ossama Meslek in the final metres.

Next up at European Champs Annett and both Nic Dhomhnaills Dominate in Galway

Andrew Annett of Mourne Runners led home an entry of over 2,000 at the 36th Streets of Galway 8km, held on Saturday evening (August 6).

Annett finished in 24 mins 10 secs, giving him twleve seconds to spare on Sergiu Ciobanu of Clonliffe Harriers who finished in 24:22. Third in 24:35 was Donal Devane of Ennis Track Club. The top six finishers were all under 25 minutes.

Dominating the women’s race were sisters Ide and Sorcha Nic Dhomhnaill, both from Donore Harriers, who finished in 26:50 and 26:57 respectively. Third in 27:08 was Laura Mooney from Tullamore Harriers

Among the age category winners was John Leahy of Lios Tuathail AC who, although an M50, was also first male master overall in 27:34. Irish Olympian Christine Kennedy of Galway City Harriers was first W65 in 34:10; her sister Phyllis Borwn of the Star of the Sea club in Co Meath was first W70.

Stephen Scullion of Clonliffe Harriers proved the class of the field at the Feile 10km held in Belfast on Sunday (August 7).

Finishing in 29 mins 46 secs, Scullion had over a minute to spare on Conall McClean of St Malachy’s AC who finished in 31:00. Third in 31:01 was Eskander Turku of Annadale Striders.

First woman in 35:27 was Emma Mitchell of Clonliffe Harriers in her second road race victory in three days. Glady Ganiel of North Belfast Harriers was second in 37:09 and Judith Storm third in 37:49.

Running an impressive time of 49 mins 48 secs to win the Kilbeggan 10-Mile, also on Sunday, was Conor Duffy of Glaslough Harriers.

Duffy was on his own for much of the race, with Robert Murphy of Donore Harriers finishing second and first M40 in 52:35 followed by Barry Sheil of Longford AC in 53.13.

First woman was Ciara Hickey of Brothers Pearse AC in 56:35; Hickey was also first W40. Grace Lynch of Iveragh AC was second in 57:07 and Mary Mulhare of Portlaoise AC third in 58:30.

In Co Donegal, City of Derry Spartans veteran Declan Reed and Natasha Adams of Letterkenny AC were the winners of the Danny McDaid 15km.

Reed finished in an impressive time of 48:58, two minutes ahead of John McElhill of Finn Valley AC. McElhill crossed the line in 51:01, with Foyle Valley’s Matthew McLaughlin third in 51:13.

Adams finished ninth overall and first woman in 52:57. Her Letterkenny club mate Shauna McGeehan was next to cross the line in 63:39 with Rosses AC’s Martina Mulhern third in 64:46

Friday’s all right for racing…

On an exceptionally busy Friday evening (August 5) Ben Branagh of St Malachy’s AC in Belfast was the winner of the Carlingford 5km, organised by Glenmore AC in Co Louth, which attracted a good cross-border entry.

Branagh finished in 14 mins 23 secs, with Kieran Kelly of Raheny Shamrock AC second in 14:57 and Neil McCartan of East Down AC third in 15.00. With three finishers in the top ten, North Belfast Harriers took the team prize ahead of Raheny Shamrock and Armagh AC. Ace AC was best of the junior teams.

First woman was Emma Mitchell of Clonliffe Harriers in 16:30, followed by Robyn McKee in 16:51 and Caitlyn Harvey in 16:51. Both are members of Annadale Striders, which duly took the women’s team prize. Dunleer AC was second and Dromore third. .

Fastest time at the Co Down 5km Series was Brhane Gebrebrhan of Annadale Striders in 15 mins exactly. Three seconds behind for second was Patrick McNiff of Newcastle and District AC.

First woman was 13-year-old Emer McKee of Willowfield Harriers whose time of 16:23 saw her beating experienced campaigners Nakita Burke of Letterkenny AC and Olympic steeplechaser Kerry O’Flaherty of Newcastle and District. Burke finished in 16:28 and O’Flaherty in 16:53.

Eskander Turki of Annadale Striders had almost two minutes to spare when winning the Mallusk 5-Mile in 26 mins 31 secs. Second in 28:23 was Jordan Brian Heron of Larne AC. First woman in 31:41 was Elisoa Crawford of Seapark AC.
Winners of the Stanley Reid Memorial 5-Mile in Cookstown were Eoin Mullan of Omagh Harriers in 26 mins 45 secs and Pauline McGurran in 32:59.

At the Streets of Athboy 5km, in Co Meath, Irish mountain running international Eoin Flynn of Rathfarnham WSAF AC, on a visit home from his Canary Islands base, was the winner in 15:23.

Trim AC won both men and women’s teams title, with the women beating host club Fr Murphy’s AC and Navan AC and the Trim men finishing ahead of Raheny Shamrock AC and Dunshaughlin AC. Over twenty teams entered both categories.

Late decision leads to a win

Any race organiser doubting the benefit of roadside advertising should know that but for one such sign Peter Somba wouldn’t have appeared at Friday night’s GR 8 8km in Mitchelstown writes JohnWalshe.

On his way to Killarney for the half-marathon the following day, the much-travelled Dunboyne athlete spotted a hoarding for the ‘GR8 8K’ and immediately made the decision to run.

It proved to be a fruitful stop-off as he cruised to yet another victory, his 24:08 for the distance giving him over a minute to spare from Conor McCauley of Leevale AC who finished in 25:15 with Andrew Sheehan from Clonakilty Road Runners third in 25:30.

Although Somba’s time was just shy of Kevin Maunsell’s course record of 23:57, the women’s best of 28:48 held by Niamh Moore was broken by two seconds by her Leevale clubmate Ciara O’Neill. The Tipperary native ,who been out of action for most of the year due to anemia, was delighted with her performance – and the record bonus of €200.

“This was my first road race since January so I wasn’t going for a time; I was just going to see could I finish because I’ve dropped out of the last few races,” said the 23-year-old who is now based in Cork and coached by Donie Walsh. Michelle Kenny, also Leevale AC, continued her recent streak of success on the road finishing second in 29:23 with Gwen Conroy of Watergrasshill AC third in 32:51.

As for Peter Somba, he went on to win the Run Killarney Half Marathon in 70 mins 28 secs the next day. First woman in 80:06 was Niamh Clifford of Donore Harriers. In the related 10km, winners werre Vinny Connolly of Mulligar Harriers in 33:33 and Siobhan Hoare of Toghers AC in 38:34.

One last win at home

Another young Leevale athlete – Jane Buckley – made her final appearance at home before taking up a scholarship at Providence College when winning the popular Novartis BHAA 5km at Ringaskiddy on Wednesday (August 3).

In her first road race since Christmas, Buckley – ranked seventh this year in the country over 3000m following her Irish Schools’ 9:51.30 win in June – finished eight seconds clear of Martina Kiely with her time of 17:40.

Michelle Kenny was third in 18:22 with Claire McCarthy, continuing her comeback after illness, fourth in 18:39. Since Kiely, Kenny and McCarthy were all representing the Dept of Education, the team prize was never in doubt. Interestingly, showing the age profile nowadays in races, the three in Buckley’s wake were each at least twice her age!

The same trend continued in the men’s race as again the top four were all in the masters’ category. John Meade (Dept of Educ) had a clear win in 15:58 from Alan O’Brien (McCarthy Insurance) who recorded 16:38 with Michael Corbett (Flextronics) third in 16:42 and Nick Hogan (UCC) fourth in 16:48.

Winner of the Mourne Seven Sevens mountain race in Co Down on Saturday (August 6) was Adam Cunningham of Mourne Runners.

Cunningham took 3 hrs 48 mins 47 secs to complete the 30.5km course, which starts from Newcastle and takes in all the distinctive peaks of the Mournes, among them Donard, Commedagh, Bearnagh, Meelmore, Meelbeg and Binnian. Second in 4:09.47 was Timothy Johnston; Paul Pruzina was third in 4:10:28.

Fifth overall and first woman was Alice Flint of BARF NI in 4:30.37.Esther Dickson of Newry AC was second in 4:51.46 and Martsje Hell of North Belfast Harriers in 4:57.30

Stuart Wilson of Victoria Park and Connswater AC won the half marathon at the Run the Trails Mount Stewart 5km, 10km and Half Marathon on Co Down, also on Saturday.

Derek Crammond of Parnell AC was the winner of the Sugar Bowl mountain race in Kilmacanogue, Co Wicklow on Wednesday evening (August 3) – the final round of the annual Leinster Evening League.

Crammond completed the 7.5km race with 450m of climb in 33 mins 57 secs. Second in 34:02 was Matthew McConnell, with Cian McDoonald of Ballyroan and District AC third in 34:36

On a good night for the McDonald family Breda McDonald, Cian’s sister, was first woman in 42:16. Deirdre Nic Canna of Donore Harriers was second in 43:27 and Rosy Temple third in 47:09.

Overall winners of the league look to be Peter Bell of Kilcoole AC and Becky Quinn.

Making it a Mullingar Harriers double at the opening day of the Longford Trail Run Series, again on Wednesday, were Oisin Lane in 17 mins 44 secs and Maura Dervan in 19:43.

On the same evening, Joel Chambers of Willowfield Harriers won the Crawfordsburn 5km Trail Race with a time of 17 mins 26 secs for the tough course. First woman was Lucy Cheatley in 21:14.