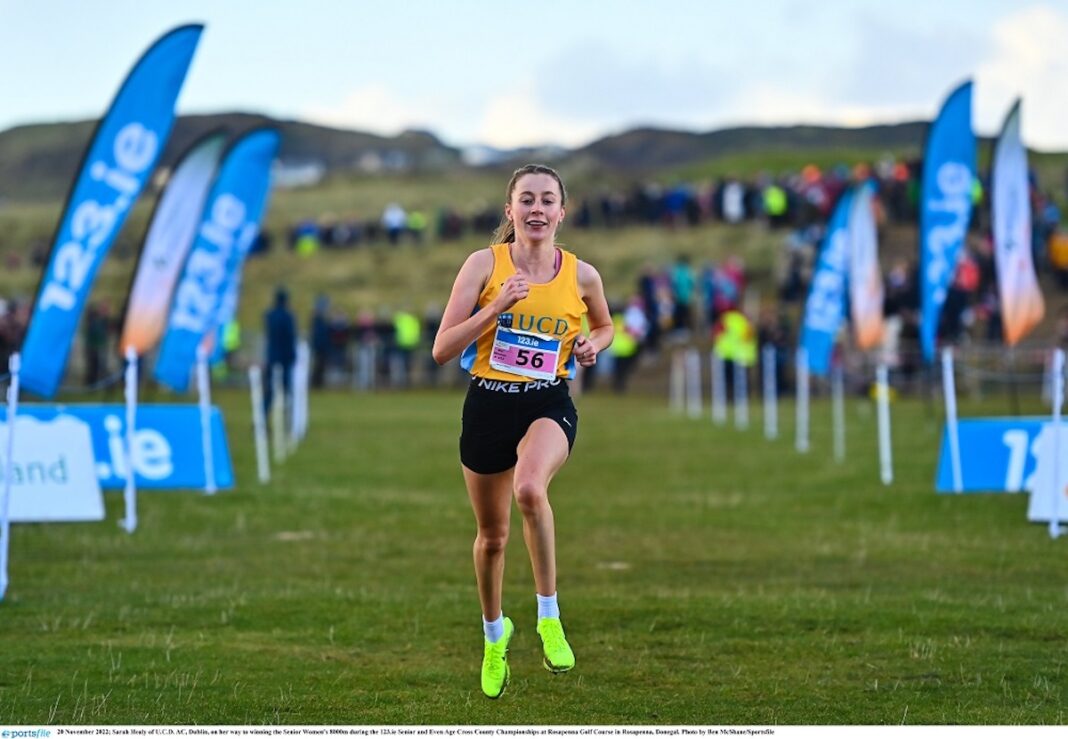 Youngsters shine in the senior ranks at the All-Ireland Cross-Country and Lindie Naughton brings all the Irish action from the weekend.

Sarah Healy and Darragh McElhinney, both still in the U23 age group, made it a UCD AC double at the All-Ireland Cross-Country Championships hosted by Cranford AC at Rosapenna Golf Course, Downings, Donegal on Sunday (November 20).

In women’s 8km race, Healy, who has a number of Irish track titles to her credit, was taking a first national cross-country title. She was in the mix from the start, when first Fionnuala Ross of Armagh AC and then defending champion Michelle Finn of Leevale AC pushed the early pace.

Included in the leading group of about seven athletes were Mary Mulhare of Portlaoise AC, Lauren Tinkler of Dublin City Harriers AC, and Ciara Mageean, who like Healy is perhaps better known for her track achievements.

With about 3km of the 8km race to go, it was Mageean, in City of Lisburn AC colours, who moved to the front, with only Healy attempting to stay with her. Only on the final 1500m lap, did Healy make her break pulling away to win in 27 mins 5 secs. Mageean was second in 27:20 and a fighting Michelle Finn third in 27:25.

Behind them, the veteran Anne McGlynn of Letterkenny AC had moved steadily through the field and ended up out-sprinting Mary Mulhare for fourth place in 27:32.

In the U23 category, Danielle Donegan of UCD AC and Laura Mooney of Tullamore Harriers were second and third behind Healy. Finishing a steady sixth was Aoibhe Richardson of Kilkenny City Harriers in 27:38. In seventh place Lauren Tinkler, having the race of her life, led Dublin City Harriers to team victory by a single point over Letterkenny AC. Third was UCD AC.

Dublin, with four finishers in the top fifteen, was first county team ahead of Cork and Donegal.

Darragh Mcelhinney of U.C.D. AC, Dublin, on his way to winning the Senior Men’s 10,000m during the 123.ie Senior and Even Age Cross County Championships at Rosapenna Golf Course in Rosapenna, Donegal. Photo by Ben McShane/Sportsfile

A finish for the ages

Only in the final 800m was a thrilling men’s senior race decided when McElhinney pulled away from defending champion Hiko Tonosa of Dundrum South Dublin AC for victory.

McElhinney, who led Ireland to U23 team victory at last year’s European Cross-Country Championships, finished in 29 mins 59 secs. Tonosa was second in 30:03, while finishing a solid third in 30:06 was Peter Lynch of Kilkenny City Harriers.

Efrem Gidey of Clonliffe Harriers, who had to fight his way to the front after the initial skirmishes, was fourth and second U23 in 30:10 followed by Keelan Kilrehill of Moy Valley AC, fifth and third U23 in 30:14.

A new generation of Irish distance runners is clearly coming through nicely — and it looks like Ireland will field another strong U23 team at the Europeans in three weeks time.

In a closely fought team competition, Gidey was leading Clonliffe Harriers to another victory, with East Cork AC, led by Tim O’Donoghue in eleventh place, three points behind for second and Mullingar Harriers third. Dublin proved best of the counties with six finishers from four clubs (Clonliffe, DSD, DCH and Rathfarnham WSAF) home in the top fifteen. Antrim, led by Finn McNally was second and Cork, led by McElhinney, third.

In the combined junior and U18 men’s race, Dean Casey of Ennis TC pushed the pace from the start, closely tracked by a group including Sean McGinley of Finn Valley AC, Nick Griggs of Mid-Ulster AC, US-based Scott Fagan of Metro St Brigid’s AC and Niall Murphy of Ennis TC

By halfway, the 6km race had resolved itself into a two-way battle between Casey and Griggs, both members of the silver medal winning Irish U20 team at last year’s European Championships. Only with a kilometre to go did Griggs make his move and pull away although Casey chased him hard all the way to the line. Griggs finished in 17 mins 38 secs with Casey two seconds behind for second. Running the race of his life to finish third and first M18 in 18 mins 11 secs was Jonas Stafford of Ashford AC in Co Wicklow, who was also first M18. Nicholas Griggs of Mid Ulster AC, Tyrone, celebrates on his way to winning the Men’s Junior 6000m during the 123.ie Senior and Even Age Cross County Championships at Rosapenna Golf Course in Rosapenna, Donegal. Photo by Ben McShane/Sportsfile

In a M18 triple whammy for Dublin clubs, Dundrum South Dublin AC, led by Jamie Byrne in 14th place, was the winning team ahead of Clonliffe Harriers and Tallaght AC. No surprise then that Dublin was first county team ahead of Cork and Kilkenny.

First home in the junior and U18 women’s race was Anika Thompson of Leevale AC in 14 mins 6 secs. Anna Gardiner of East Down AC was second and first W18 in 14:10 and Roise Roberts of North Belfast Harriers third in 14:13. Youghal AC, led by fifth placed Avril Mellerick, was first junior team, with Finn Valley AC second and Moy Valley AC third. Mayo was first county, followed by Wicklow and Dublin. Anika Thompson of Leevale AC, Cork, on her way to winning the Girls U18 4000m during the 123.ie Senior and Even Age Cross County Championships at Rosapenna Golf Course in Rosapenna, Donegal. Photo by Ben McShane/Sportsfile

Willowfield Harriers, led by sisters Lucy and Kirsti Foster, was first W18 team, followed by Ennis TC and Mullingar Harriers. Down was first county team, ahead of Dublin and Cork.

For host club Cranford AC, there was one home victory. It came in the boys U16 race won by Caolan McFadden who, without question, got the loudest cheers of the day!

Four Irish athletes finished inside the top twenty-three in the men’s 10km race at the NCAA Cross-Country Championships, held in Stillwater, Oklahoma on Saturday (November 19).

Leading them home in 13th place with a time of 29 mins 11 secs was Brian Fay of Raheny Shamrock AC, who is a post-graduate student at Washington State. Fay, in tenth place, was Ireland’s top finisher in the senior race at the European Cross-Country Championships hosted by Ireland at Abbotstown last December.

Finishing 48th in the women’s race was Leevale AC’s Jane Buckley who took up a scholarship with Providence College earlier this season and won the Big East Championships a month ago. Her time was 20:16.6. Just ten seconds behind Buckley in 20:26 was Sophie O’Sullivan of Ballymore Cobh AC who was 73rd. Other Irish finishers were Niamh O’Mahoney of An Riocht AC 157th in 20:58.3, Orla O’Connor of Waterford AC 194th in 21:18 and Alex O’Neill of Ennis TC 232nd in 21.49.9. Cocoman finished in 15 mins 42 secs, just edging out BHAA regular John Meade of the Dept of Education team who finished in 15:44. In a close race up front, Eric Curran of Merck finished third in 15:46. Steeds was a comfortable winner of the women’s race in 17:11, with Carol Finn of Carol Finn Physio second in 18:08 and Meadhbh Moynihan of Complete Financial third in 18:32.

Good news for Dublin BHAA members is that the cross-county season will start on Saturday December 10 with a new race — the BNP Paribas 6km at Dodder Valley in Tallaght (11am). Details www.bhaa.ie.

Also in Co Cork on Sunday, Danny Mullins from Bantry AC in 56 mins 4 secs and Clara Ryan of St Finbarr’s AC in 64:49 were the winners of the Skibbereen 10-mile held on Sunday (November 20). Winners of the associated 5-mile were Killian Lynch of West Limerick AC in 27:190 and Jean Lucey of Macroom in 32.19.

Trail running. It’s like cross country, but longer? And hillier.

Derek Crammond of Parnell AC was the winner of the Run the Line 26km over the Dublin Mountains on Saturday (November 19).

Crammond completed the course, which starts and finishes in Glencullen, taking in Three Rock, Fairy Castle and neighbouring hills, in 1 hr 55 mins. Also breaking two hours to finish second was Matthew McConnell with a time of 1:56. 22. Third in 2:03.34 was Peter Roche of Dunboyne AC. First woman in 2:25.51 was Becky Quinn. Just over a minute behind for second in 2:26.35 was Aoife Courtney of Mooreabbey Milers. Third in 2:30.26 was Sarah Brady.

A clear winner of the 13km race in 54 mins 29 secs was Eoin Flynn of Rathfarnham WSAF. Second in 58:04 was John McAuley, also Rathfarnham WSAF AC, while third in 58:16 was Paddy Lyons of Tallaght AC.

Eighth overall and first woman in 59:51 was Elizabeth Wheeler of Glen Runners. Noreen Brouder was second in 62:29 and Anne O’Donovan third in 62:44. A total of 1,170 were out on the hills which was a fund-raiser or the Dublin Wicklow Mountain Rescue Team. Jennings’s time of 6 hrs 28 mins 52 secs is the sixth fastest ever by a woman on the course, which takes in part of the Appalachian Trail. First woman in a new course record of 6:05.41.5 was American ultra runner Sarah Biehl. The previous mark of 6:12:00 was set by British ultra-running legend Ellie Greenwood in 2012.

Ryan Forsyth of Newcastle and District AC, a member of the Irish senior men’s team at the European Cross-Country Championships last December, clocked a time of 63 mins 54 secs at the Monteray Bay Half Marathon in California on Sunday, November13. Forsyth finished sixth in the race.

GHOST EVERYONE. GRIND IN SILENCE. SHOCK THEM ALL WITH SUCCESS. – Motivational Speech Compilation

5 Ways Your Event May Be Excluding Attendees