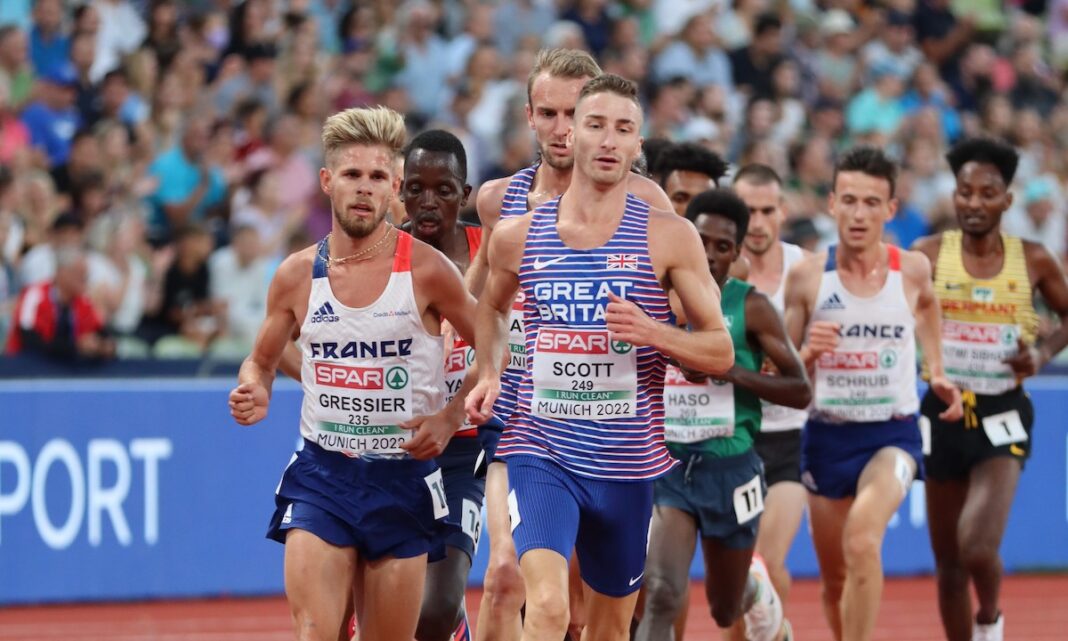 If you are a follower of British distance running, and since you’ve clicked onto this piece there is a fair probability you are, then Marc Scott should need no introduction.

A Yorkshireman’s CV is not short of success. He’s competed at the Olympics, four World Championships (one indoors), two European Championships, a Commonwealth Games and multiple European Cross Country Championships.

Furthermore, his set of PBs place him high on the UK all-time lists at every distance. From 3000m to the half marathon he’s a dominant feature. This only confirms his status as one of the fastest runners Britain has ever produced.

Much of this has happened whilst based in the United States. Firstly at the University of Tulsa (during which he was crowned NCAA 10,000m Champion in 2017) before joining the Bowerman Track Club  in the same year. BTC was a Nike-sponsored training group led by Jerry Schumacher and based in Oregon.

Marc announced in December he would be leaving Bowerman for at-the-time unannounced pastures new and, earlier this week, it was announced that he had joined the famed NN Running Team. Speaking to me for Fast Running from his training base in Kenya, Marc shared the reasons for his move, his changing priorities, and ambitions for 2023 and beyond.

The times that sit behind Scott’s career on the track speak for themselves. His proudest, and perhaps the most famous, is his 12:57.08 European Record for 5000m indoors set last February in Boston. It is a time that only seven men have bettered indoors, two his former BTC teammates in the same race, and only five Europeans have run faster outdoors.

His biggest achievement on the track came just a few weeks after that 5000m, at the World Indoor Championships in Belgrade – a bronze medal in the 3000m. It was only the second time a British male has medalled at the distance after Rob Denmark in 1991 (Laura Muir (2018), Yvonne Murray (1993) and Liz McColgan (1985) have done so on the women’s side). It was a performance that, clearly amazing in its own right, had potential to act as a springboard into a busy summer.

Whilst I don’t want to speak out of turn, Marc will readily admit this summer didn’t go quite as planned. One of the athletes to run at all of the summer’s three major competitions, a World Championships in his adopted home state of Oregon ended with 14th in the 5000m, and Munich’s European Championships with 12th over 10,000m.

That’s not to suggest it could all be classed as a disappointment; for me, at least, his best performance of the summer was somewhat overlooked – a fine fourth-place finish in the Commonwealth Games 5000m (13:19.64), a time bettered outdoors just once in his career.

Furthermore, it was a rather esteemed trio ahead of him – the Olympic and World Championship bronze medallist Jacob Kiplimo and two of the fastest athletes in history over the distance; Nicholas Kipkorir Kimeli and Jacob Krop, eighth and sixth fastest all-time respectively. A change for the better?

You don’t need me to say that change is no bad thing and, as Marc himself notes, the track season was just one factor that led to his change in training set up and home location; ‘ultimately a few things came together at once and I was ready for a change in scenery. My visa expired, I didn’t want to move to Eugene and … a difficult summer track season’ (side note: having spent 12 days in Eugene last summer, I am not sure I could picture wanting to live there either).

In a world with numerous options for training, both home and abroad, it was the benefits of a well-supported group based (in HQ terms at least) in Europe, alongside the opportunity to train with some of the best athletes in the world. When we spoke for my Countdown to Tokyo piece prior to the Olympics, Marc noted that one of the benefits of Bowerman was working to a collective goal and racing alongside training partners, including American Grant Fisher and Canadian Moh Ahmed.

This is something Marc notes he will ‘definitely miss’ but is equally sure he ‘will feel a sense of belonging with NN once I wear the kit’. Interestingly, the team-based element of NN was not something he had thought about prior to joining, but as he notes ‘I didn’t think about this beforehand but it’s great that I can be amongst a team environment again, but in a slightly different setting’.

I mentioned training alongside some of the world’s best, and this is not an understatement. It is illustrious company that Scott will soon be calling his teammates; the five leading athletes on NN’s roster (Eliud Kipchoge, Kenenisa Bekele, Joshua Cheptegai, Letsebenet Gidey and Geoffrey Kamworor) own a combined 43 Olympic and World titles between them, as well as the current World Records for both 5000m and 10000m, women’s half marathon and men’s marathon.

One other athlete he will be joining is fellow Brit Jake Smith, who joined NN last year. The two have yet to speak (‘it was all pretty quiet until the announcement’), although they have raced each other seven times to date – Marc getting the better on all occasions. It is undoubtedly exciting to see two British athletes in a group amongst distance greats.

Having seen the set up and organisation in Nijmegen [in the Netherlands, where NN is based], there are exciting prospects ahead; Marc has yet to meet the team but is excited to be doing so when he moves to Kaptagat in a few weeks. At present, he plans on being in Kenya for the next eight weeks ‘then intermittently throughout the season as we build up for racing’, splitting his time with being in the UK. Whilst the NN squad comprises masters of both the roads and track, it is known primarily for its domination of the road running calendar in recent years. Does this suggest a change in priorities towards the tarmac over the track? Absolutely.

That’s not to say it is something entirely new to Marc’s repertoire; his road races to date strongly suggest it to be a good move. His 5k best (13:20) is the British Record, and his 28:03 10k PB, set in 2021, is a time only Mo Farah, Emile Cairess and Callum Hawkins have bettered in his lifetime. Wins at the Great Manchester Run, Great South Run (his only ten mile race), Podium 5k and Ribble Valley have proved his worth domestically.

Perhaps his forays into the longer distances provide the greatest intrigue and set the scene for the future. A 60:39 half marathon debut in Antrim in 2020, finishing behind Mo Farah, catapulted him – at the time – to third on the UK all-time list.

This was followed up with 60:35 at the short course in Antrim a year later and the biggest win of his career – the Great North Run (61:22). It might not have been the usual course, but it saw him enter the history books and join Mike McLeod, Steve Kenyon and Mo Farah as the only British winners of the men’s elite race in its 40-plus year history.

Particularly, when one thinks of Patrick Sang – himself an Olympic medallist in the steeplechase – as a coach, the mind immediately turns to Eliud Kipchoge. A partnership that has brought about so much success over the marathon, it is natural to ask the question on whether we will see Marc take on 26.2 miles.

Changing priorities may be the overarching aim, but how about the short-term goals as we look towards the 2023 season? Will it be a road-focused year, or might we see him on the track at August’s World Championships in Budapest?

“I want to debut in the marathon in 2023 and also break 60 minutes in the half. Budapest isn’t really in the pipeline right now but things can always change”. A push from me was met with silence as to whether that marathon might be one in the capital in April, noting he has paced at the last two editions.

This year also sees the inaugural World Athletics Road Running Championships in Riga (Latvia) at the end of September. Incorporating races over the mile, 5k and half marathon, the latter being the World Half Marathon Championships (the last edition of which (2020) was where Marc’s new teammate Jake Smith ran 60:31), it seems perfectly suited to Marc’s career goals and ‘would definitely be something I would be interested in’.

Looking towards the potential for his second Olympics next year in Paris, Marc has noted elsewhere his ambition of obtaining the marathon qualifying standard (2:08:10), something only Mo Farah and Steve Jones have done before. It’s a tall order but, based on his career to date, not one I’d bet against.

Ending on a lighter note, it isn’t all top-tier elite racing, though. If you have read this whilst in the middle of cross country league season, it may please you to know Marc made an appearance in the Surrey League in November – something he called ‘super fun and relaxed’. It’s always great to see some of our best take to the more local races.

Whatever happens next, there are exciting times ahead for British distance running.

10 Bible Verses About Encouraging Others