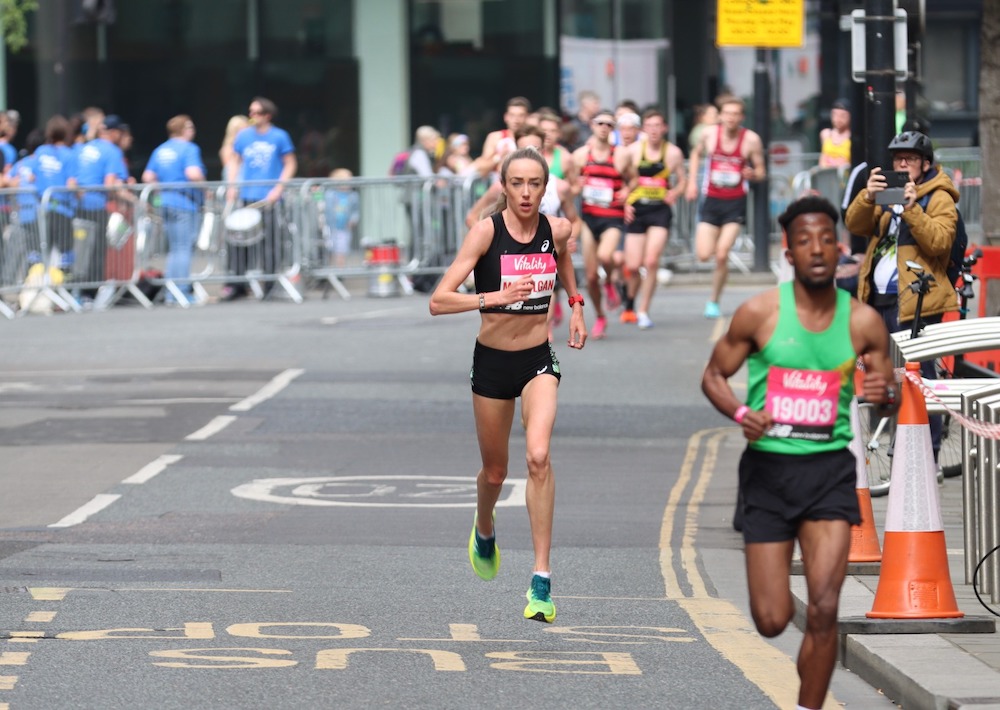 It feels a little bit strange to say this on London Marathon day, but it is almost a bit hard to know where to start this week’s round up! The autumnal shake up resulting from the biggest road race of the year being in the first weekend of October means plenty more has happened in the past couple of days – and one of those other locations is where we will start.

It has been quite a year for Eilish McColgan and, after one that feels like it has lasted an eternity, her season came to a close with a more-than-emphatic win at the Great Scottish Run 10k. Not only did her 30:18 outing on the streets of Glasgow see her take the win with a margin of over six seconds, it also saw her improve her own British Record and European Record by one second.

A fitting way to end a year that has included some incredible performances on both the road and track, particularly given she was originally meant to be racing over four times the distance in the English capital today.

Now, we hope a short holiday is planned, but who would want to bring an end to a season like this one?

A photo of Callum Hawkins that’s clearly not in Scotland in October. Photo: Kevin Morris

In his first visit to the event since 2018, Callum Hawkins took his first win (63:35) on the Glaswegian roads since 2016 for the Great Scottish Run half marathon, finishing comfortably in front of Adam Craig (64:17) and his brother Derek Hawkins (65:32). It has been a tumultuous few years for Callum, including injury that saw him pull out of the Olympic marathon last summer, but it has been great to see his return to fitness this year, with this being his third half marathon of the year.

Ah, the London Marathon. There is just something special about it, even if I cannot entirely place what that is. Maybe I am biased as a born-and-bred Londoner, someone who has only missed one London Marathon in 19 years (thanks, COVID!), but it just brings a bit of magic to the city.

Taking place in October for the third and final time before moving back to its traditional April date in 2023, both elite races incorporated some stellar athletes, despite a flurry of last-minute withdrawals including Mo Farah, World Record holder Brigid Kosgei and British favourite Charlotte Purdue.

The men’s race saw a large pack running together for much of the course, before Kenyan Amos Kipruto made a break along the Embankment that the rest of the field could not respond to.

His winning time of 2:04:39 is by no means the fastest London has seen, and sounds particularly pedestrian following Berlin last weekend, but it is an excellent result for the 2019 World Championship bronze medalist. The top three was completed by Leul Gebresilase (2:05:12) and Belgian Bashir Abdi (2:05:19). In fifth, Kenenisa Bekele bettered the V40 World Record with 2:05:43. A day to remember

It was a day to remember for Weynay Ghebresilasie as he won the British Championships title (2:11:57), improving his PB by 20 seconds (set at Rotterdam in April this year) in the process. A fitting venue, perhaps, for the athlete who was the Eritrean flag bearer at the 2012 Olympics prior to seeking refuge here.

Behind him was a good run from Phil Sesemann (2:12:10), the Bromley / Leeds based athlete running a 48 second improvement on the time he ran on this course twelve months ago.

The British top three was completed by Kent AC’s Ross Braden. Improving his best by two minutes, it was undoubtedly the best run of Ross’s career, his 2:14:32 seeing him complete the top-three in the British Championships and move into the top 120 on the UK all-time rankings. Letting it rip on the Embankment

In the women’s race, all eyes were on Yalemzerf Yehualaw, the fastest marathon debutant in history, and last year’s winner Joyciline Jepkosgei. The attention was placed in the correct place, as that was the top two come the end of the day.

Falling at the 20-mile mark proved no issue for Yehualaw, as she put down a somewhat incredible 4:43 mile on the Embankment to, quite literally, blow the field apart. Her time of 2:17:26 fell short of the targeted women’s only World Record, but is one of the fastest in London’s history. Joyciline Jepkosgei held on well to finish in 2:18:07, with the podium rounded out by Alemu Megrtu (2:18:32).

After the late withdrawal of Charlotte Purdue, the women’s domestic race was thrown open, with only Rose Harvey and Steph Twell left in the elite field – opening the door for someone in the mass start. After running the first half together, Rose was able to move away from Steph in the latter phases, finishing in 2:27:59 – just one second inside the World Championships qualifying time.

Behind her, there were incredible runs by both Hannah Alderson (2:35:56) and Anya Culling (2:36:21) to finish inside the top-three of the British Champs race. The former, who ran for Great Britain at the 2012 European XC Championships as a junior, ran faster than her half marathon PB, twice over! There were excellent performances by Dani Nimmock (2:38:18) and Helen Gaunt (2:39:10) also to finish well inside 2:40.

It was a tough last few miles for Twell, who finished in 2:39:16 in her first London Marathon. It was just not in London where athletes were taking to the streets for 26.2 miles of running this weekend; the Chester Marathon made a welcome appearance with some excellent times as usual.

A bit closer to the capital and Milton Keynes, where Joe Gerhard (2:51:58) and Marcelina Watkinson (3:47:17) took the honours at the MK Autumn Run Marathon. The associated MK Autumn Half Marathon went to Jessica Carter (96:00) and Ian Clark (79:52), whilst a day earlier there was plenty to celebrate in the Inchley household, with Andy Inchley (38:07) and Amy Inchley (45:15) taking the honours in the MK 10k.

Well known as a course that can produce fast times, the Cardiff Half Marathon delivered once more with Kenyan Geoffrey Koech finishing agonisingly outside the one hour barrier with 60:01.

A close finish between Gizealaw Ayana (60:16) and Chimdessa Gudeta (60:17) completed the top three, with a similarly close battle between Kenyan duo Beatrice Cheserek (66:47) and Viola Chepngeno (66:52) to take the title in the women’s race, with Zewditu Aderaw (69:16) third. Amongst the domestic athletes, it was seventh place for both Natasha Cockram (73:11) and Dewi Griffiths (64:15) to finish as the fastest Brits.

Completing the 13.1 mile action was Tara Spillings (92:51) and Stephen Garaghty (73:19) at the HedgeJog Half Marathon and Lauren Graham (87:42) and Mark Emmerson (72:22) at the Great Cumbrian Run Half Marathon, whilst Chris Pownell (76:35) and Eleesha Charnley (87:23) were quickest of the athletes who toed the line for the Run Aintree Half Marathon.

The iconic race in Greece, which runs from Athens to Sparta, is in it’s 40th year and it did not disappoint. A strong British contingent for the 250km road race (with a mountain in the middle) were met with high temperatures this year.

Ali Young, a British 24hr athlete, was 4th lady in just under 29 hours, and Andy first British male in 13th place in just under 28 hours and the race was won by the Greek Fotis Zisimopoulos and Latvia’s Diana Dzaviza. Ali Young on the roads of Sparta. Photo: Paul Magee

How Many Kids Do Behati Prinsloo and Adam Levine Have?

What is Geofencing? | Healthcare Success