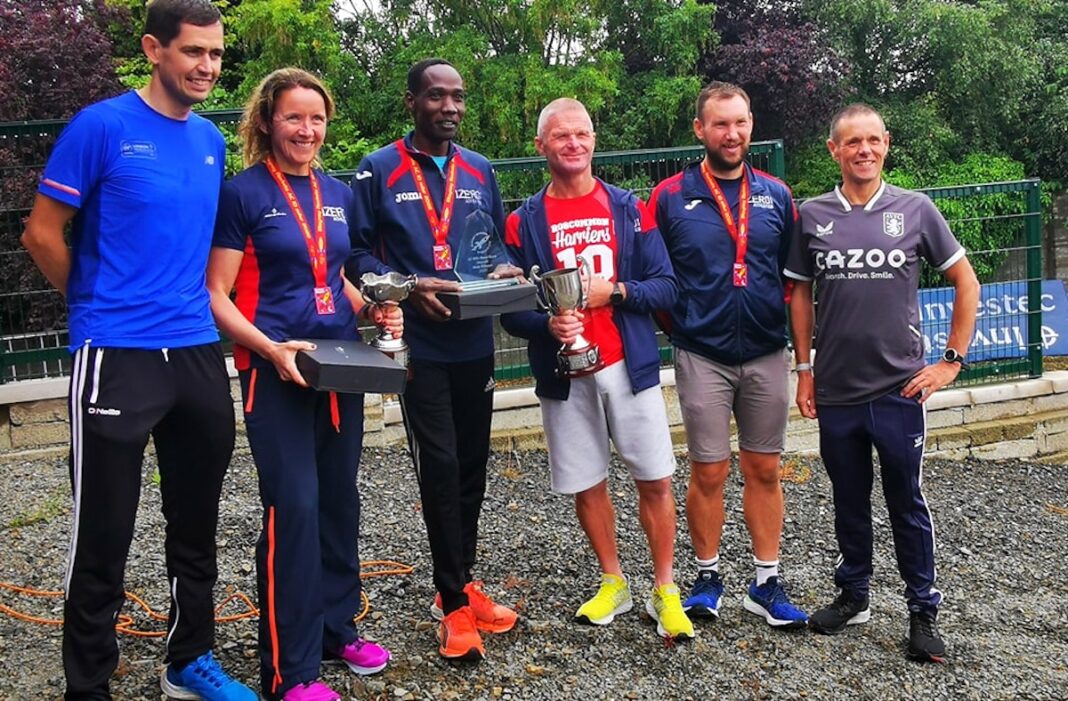 Another busy week of home action and semi-final performances at the World Championships in Eugene, Oregon. Lindie Naughton reports.

Dunboyne’s Peter Somba added another win to his growing collection this season with victory in the Duleek 10km in 30 mins 47 secs held in warm, humid conditions on Sunday (July 24)

Declan Toal of North East Runners was second and first M50 in 33:54 and Robbie Keane of Drogheda and District AC third in 35:11.

Finishing sixth and first woman was Olympic marathon runner Breege Connolly in 37:23. Sarah Baryga of Sli Cualann AC was eighth and second woman in 37:48 and local athlete Karen Costello of Dunleer AC third woman in 38:23. All three women were over 40.

Myles Gibbons of SBR AC was second and first M45 in 16:19 and Paul O’Beirne of Sportsworld AC third and first of the Dublin Novice Championships finishers in 16:25. Eighth and first woman in 16:38 was Ciara Hickey of Brothers Pearse AC.

Sarah Mulligan of Dundrum South Dublin AC was second in 18:12 and Yvonne Macauley of Crusaders AC third in 18:26. Aisling O’Connor of Rathfarnham WSAF AC, who finished in 19:06, was first in the Dublin Novice Championships. In Co Cork, Sergiu Ciobanu of Clonliffe Harriers had his second win in three days at the Bob Burke 4-Mile in Fermoy.

Ciobanu finished in 20 mins 05 secs, with Pat Hennessy of WestWaterford AC second in 20:15 and John Meade of St Finbarr’s AC third in 20:47.

Laura Mooney of Tullamore Harriers AC was sixth and first woman in 22:11. Dymphna Ryan of Ducnrum AC was second in 22:49 and Martina Kiely of St Finbarr’s AC third in 23:04.

On Friday evening, Ciobanu had won the West Waterford Summer League Ballinameela 5km in 15 mins 10 secs, where Pat Hennessy was also second in 15.19; Fiona Santry of East Cork AC was first woman in 17:43.

Returning to the Sunday races, winners at the Mullingar 10-mile were Graham Gilsinan of Portmarnock AC in 53 mins 7 secs and Rachel Birt of Killygarry AC in 62.00.

No times are available for the Pink Rock 10km in Co Kilkenny, where James Kelly of Castlecomer AC and Adele Walsh of St Senan’s AC were the winners. Team titles were to the Gowran AC men the St Senan’s AC women.

At the Blayney Rockets 10-Mile in Monaghan on Saturday (Juky 23) , the Enniskillen-based 1Zero2 running club made it a double with Gideon Kimosop the winner in 52 mins 43 secs and Tara Malone first woman in 66:02.

Strong showing from the Donegan family

The Offaly road running league continued at Rhode on Friday evening (July 22) where Kevin Moore of Dundrum AC was the winner in 15:19.

The Donegan family was out in force with Jack Donegan first junior in 16:43.

Foley, of the HSE team, finished in 15 mins 33 secs and was also first M50. In second place with a time of 15:40 was Aidan Noone from the Department of Education, while third and first M40 was Ken Kelliher of Irish Distillers Pernod Ricard in 15:50.

Next Cork BHAA race is the Depuy Synthes 4-Mile on Wednesday, July 27 (8pm).

A sprint finish with equal times

A thrilling finish to the Burtonport 5km in Co Donegal on Tuesday (July 19) saw Declan Ferry of Rosses AC out-sprinting Letterbenny AC’s Ciaran Doherty for the narrowest of victories with both men given a time of 15 mins 15 sec.

Helen McCready of Rosses AC was first woman in 17:36.

Also on Tuesday evening, Peter Somba of Dunboyne AC continued his Meath winning streak with victory in the B5 5 Mile, held in Bettystown Somba’s time of 24:37 saw him finish comfortably clear of junior athlete Aaron Smith of the organising Cilles Club who finished in 25:14. Tadgh Donnelly of Drogheda and District AC was third in 25:37.

Another Tuesday race was the Portaferry 10 mile racewhere Stephen Connolly was the winner in 54 mins 59 secs. His Annadale Striders clubmate Stephen Wylie finished second in 55:39. Sinead Murtagh of Newcastle and District AC was first woman in 64:39.

At the World Championships, Mark English of Finn Valley AC was unlucky not to make the 800m final. English ran a season’s best time of 1:44.78 to finish third in his heat and make the semi-finals, where only the top two from the three semi-finals were guaranteed a place in the final. English finished a fighting fifth in 1:45.78.

Thomas Barr of Ferrybank AC in the 400m hurdles, Tallaght teenager Rhasidat Adeleke in the 400m, Sarah Lavin in the 100m hurdles also made semi-finals. Making the final was the mixed relay team; they finished eighth.
Next up for many of these athletes is the European Championships in Munich starting on August 15 with the team to be announced this week.

Ide Nic Dhomhnaill of Donore Harriers got the better of her younger sister Sorcha to win the national 10,000m title held in conjunction with the National Combined Events Championships and AI Games in Tullamore on Saturday (July 23).

Earlier in the week, at the Dublin Graded Meet in Tallaght on Wednesday (July 20), double Paralympian Greta Streimikyte of Clonliffe Harriers won the women’s A 1500m in 4.34.07.

Over the water for some quick times

A large group of Irish athletes travelled to Manchester for the BMC Grand Prix round in Trafford on Saturday (July 23).

Skincare gifts and fashion finds under $100