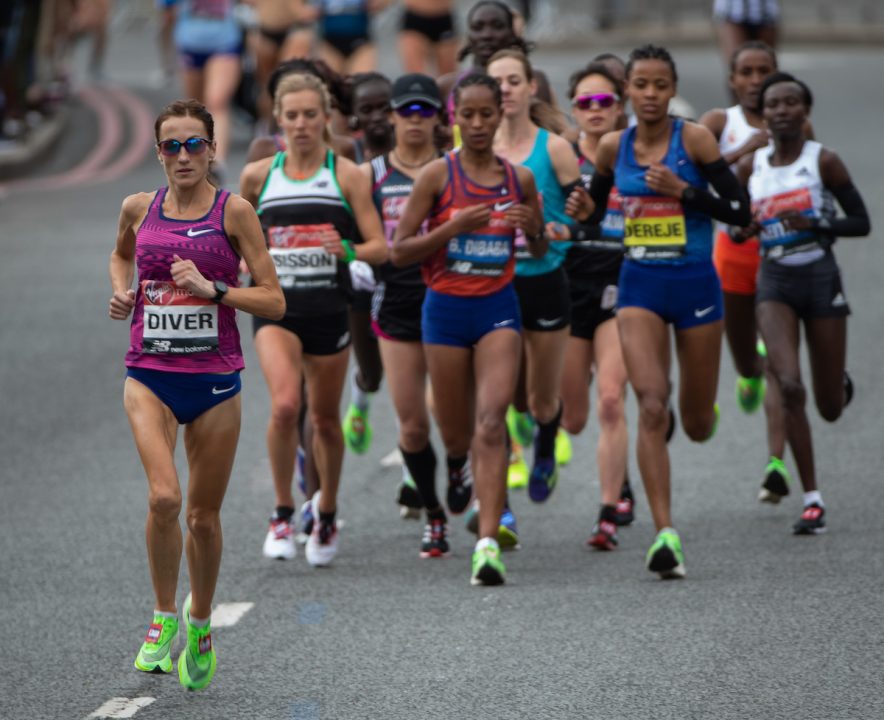 The Australian marathon record dips under the Irish record and Lindie Naughton reports on why that’s important.

Mayo-born Sinéad Diver, ran a time of 2 hrs 21 mins 34 secs when finishing 11th at the Valencia Marathon in Spain on Sunday (December 34 ) – the fastest time ever by an Irish-born woman.

Diver, who lives in Melbourne with her family, has represented her adopted country for the past eight years and her time was a new Australian record. Her previous best of 2:24.11 dates back to 2019 when Diver finished seventh in the London Marathon.

And did we mention that Diver is 45? Age truly doesn’t matter.

Behind him, Barry Keane of Waterford AC finished 14th in a personal best 13:21.57. Exactly a year ago, at the same meet, Keane had set the previous record of 13:25.96. Both athletes will travel to Italy for the European Cross-Country Championships next weekend.

In further good news, Stephanie Cotter of West Muskerry AC won the women’s title at the NCAA D II championships held in WA on Friday (December 2). Cotter was a clear winner of the 6000m race in 19 mins 49.2 secs. She had previously won the title in 2019.

Creech and Cooke Win in Waterford

Saturday was a big day for road races, with three events over varying distances in Waterford, Dublin and Belfast.

Attracting the biggest entry of the day was the Waterford Half Marathon with 1,894 finishers and a massive number of teams – fifty-five women’s teams and sixty-nine men’s teams.

Race winner was Ryan Creech of Leevale AC in 65 mins 2 secs. Yared Derese of Carrick Aces attempted to stay with Creech but slipped back in the later stages of the race, still finishing second and first M40 in 65:50.

Over a minute behind for third place in 67:18 was Sergiu Ciobanu of Clonliffe Harriers. First team was Sli Cualann AC from Wicklow, led by Brian Geraghty in twelfth place. Home side Waterford AC was second and United Striders third.

Olympic marathon athlete Aoife Cooke of Eagle AC proved the class of the women’s race winning by over six minutes in 72:58. Second in 79:31 was Fiona Kehoe of Kilmore AC, who was also first W40, while third and second W40 was Aoife O’Leary of Sportsworld AC in 81:32.

Only on countback did Watergrasshill AC take the team title after ending up tied with Clonmel AC on 55 points. Both teams were led by formidably competitive women now in the W50 age group – Linda O’Sullivan for Watergrasshill and Angela McCann for Clonmel.

In Belfast, Ben Branagh of St Malachy’s AC led home 835 finishers at the Seely Cup 10km in a race that came down to a sprint for the line. Branagh clocked 29:29, while just a second behind was Eskander Turki of Annadale Striders. Third in 29:55 was William Bryan of Southampton AC.

First woman in 33:32 was Emma Mitchell of Clonliffe Harriers. Nakita Burke of Letterkenny AC was second in 34:22 and Noeleen Scanlan, also Letterkenny AC, third in 34:41. Jingle all the way

Entry for the 31st Jingle Bells 5km in Dublin’s Phoenix Park had closed at 1,500, and included the usual mix of deadly competition up front and chasers after the fancy dress prize among the also rans, many of them running with children.

Wearing No 1 was John Travers of the host club Donore Harriers, who was the defending champion. After a fierce battle with Paul Robinson of St Coca’s AC, Travers came home a worthy winner in a superb time of 13 mins 53 secs.

Robinson was second in 14:02 and for a second year, Mitchel Byrne of Rathfarnham WSAF AC finished third in 14:17 – faster than a year earlier.

Michelle Finn of Leevale AC was first woman in 15:47, followed by Grace Lynch, who has recently joined Dundrum South Dublin AC from Iveragh AC, in 16:11 and Carla Sweeney of Rathfarnham WSAF AC in 16:21. Getting into the festive spirit now December has arrived. Photo: Lindie Naughton

Travers was leading Donore to team victory with Darragh Fitzgibbon and Daragh Keegan making up the team. Crusaders AC was second and Clonliffe Harriers third. Best of the women’s teams was Dundrum South Dublin, with Lynch, Fiona Clinton and Maria McCambridge the scoring trio. In the battle for second place, Rathfarnham WSAF AC beat Dublin City Harriers by a single point.

Fiona Everard of Bandon AC and Paul Hartnett of East Cork AC made it a Cork double at the All Ireland Novice and Juvenile Uneven Ages Cross-Country Championships, hosted by St Catherine’s AC in Conna, Co Cork on Sunday (December 4).

In the women’s 4000m race, Everard, an outstanding schools athlete now firmly on the come-back trail, produced a dominant display in slippery difficult conditions to win in 14 mins 7 sec. A week earlier, Everard had come ninth in the All Ireland Senior Championships.

Behind her, Kate McDonald of Ballyroan Abbeyleix and District AC pulled up from fourth place to second in the later stages of the race to take silver in 14:40. Third in 14:52 was Laura Buckley of Dunboyne AC. In the team competition, Dublin clubs dominated with Dublin City Harriers the winners from Raheny Shamrock AC and Clonliffe Harriers. No surprise then that Dublin was first county team.

In the men’s 6000m race, Paul Hartnett of East Cork AC pulled away from the pack early on, with only his East Cork clubmate Frank O’Brien attempting to keep with him. Hartnett was the winner in 18:57 with O’Brien second in 19:18 and Cathal O’Reilly of Kilkenny City Harriers, making up a few places to finish third in 19:24. Mullingar Harriers, with Jack Moran fourth and Vinny Connolly fifth, was first team ahead of Craughwell AC and Raheny Shamrock AC. Cork was the winning county.

Helping the Leevale team to ninth place was Olympic rowing champion Paul O’Donovan, who is unquestiobaly one of Ireland’s most successful sportsmen ever. O’Donovan, who runs to keep fit, finished a respectable 79th of the 196 finishers in the race.

At the second T-F Live meet, held in Athlone on Thursday (December 1), the stand-out performance came from Jenna Bromell of Emerald AC who won the women’s 800m with a time of 2:13.19. In the Under 16 girl’s 800m, Jennifer O’Leary of Nenagh Olympic AC recorded an eye-catching time of 2:18.50.