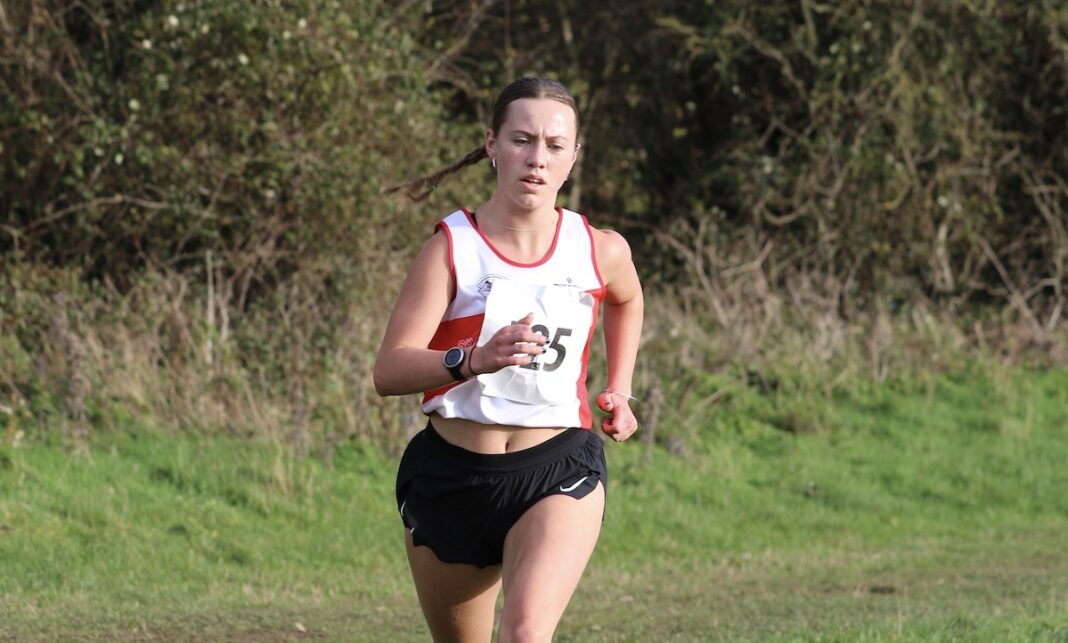 The Irish round-up might get delayed but Lindie Naughton always has our back in keeping Irish endurance in the spotlight.

Performance of the weekend came from Aoife Cooke of Eagle AC who followed up her course record at Eyeries two weeks ago with another brilliant performance at the Great Glenvile Run four-miler on Sunday (November 27) writes John Walshe.

Finishing sixth overall of the almost 300 finishers in a time of 21:30, the Eagle AC athlete knocked 14 seconds off of her own course record set in 2019.

Next on the cards for the Tokyo Olympian is Saturday’s Waterford Half-Marathon before she sets her sights on a spring marathon.

Aoife Cooke, winner of the Great Glenville Run four-mile in a course record of 21:30, receiving her prize from Liam Treacy. Picture: John Walshe

The men’s race saw a good tussle between last year’s winner Alan O’Shea and Leevale AC’s Gavin O’Rourke with O’Rourke coming out best with his time of 20:12 to O’Shea’s 20:35.

For O’Shea, now 42, it was a first race since his third place in the Cork City Marathon last June where he recorded 2:24:44

Racing every weekend doesn’t seem to do Donal Coakley of Leevale AC any harm as he had another fine run to take third in 20:37.

In an era of ever-increasing entry fees, the Watergrasshill AC promotion at just €15 (of which 10% went to Breast Cancer Ireland) was certainly good value. Along with an extensive prize list, there was a pink themed travel mug for finishers along with ample refreshments afterwards in the local school.

Fastest half marathon time of the weekend came from Tudor Mircea of Clonliffe Harriers who was the winner of the Clonakilty Waterfront Marathon XII on Saturday (November 26) in a time of 73:21. Second was Alexander Wallace of St Coca’s AC in 73:32. First women was Carmel Ward of Raheny Shamrock in 90:30.

Jesus Calle Arroyo of Raheny Shamrock AC won the winter version of the Clontarf Half Marathon also on Saturday clocking a fine time of 74 mins 20 secs for a tough course which includes a stretch on the beach. Second in 74:52 was Ciaran McKenna of Star of the Sea AC while third in 76:14 was Wayne Waldron of Donore Harriers.

In July, when he wasn’t pushed as hard, Arroyo had won the summer version of the race in 75: 52 secs.

First woman was Jennifer O’Sullivan in 90:31, followed by Mairead Roche of Raheny Shamrock AC in 94:41 and Katherine Teeling of Coast Road Runners in 94:43.

In the associated 5-mile, the winners were Ian Fitzgerald of Donore Harriers in 27:57 and Emily Shiels of Crusaders AC in 31:53.

Irish national marathon champion Martin Hoare was back in wining form at the Clane GAA 10km, another Saturday race.

Hoare finished in 31 mins 56 secs, with Eoin Molloy of Castlegar AC second in 32:10. Laura McDonnell of Rathfarnham WSAF AC was first woman in 36:25 followed by Jane Anne Healy of Galway City Harriers in 37:52.

Winners of the 5km were James McGarry in 17:55 and local athlete Gillian Clyne in 19:37

Adam Kirk-Smith on Annadale Striders was the winner of the men’s race at the Malcolm Cup held at the Queen’s Playing Fields, in Belfast on Sunday (November 27).

Kirk-Smith came home in 21:01 , with Fionntann Campbell of North Belfast Harriers second in 21:09 and Sean Melarkey of City of Derry Spartans third in 21:17. Finishing fifth and first U20 was Noah Kavanagh of Beechmount Harriers in 21:45.

In the masters’ race, Darragh Crossan of City of Derry Spartans out-sprinted David McNeilly of Newcastle and District to win in 16 mins 35 secs with McNeilly a second behind and Jonathan Canning of Foyle Valley AC third in 16:56.

Catherine O’Connor of East Down AC was a clear winer of the women’s race in 18:35. Kerry Bamber of Ballymena Runners was second in 18:54 and Kate Mulholland of St Peter’s AC third in 19:18.

Back after three years on Sunday (Nov 27) was the Meet and Train (or Meet and Race) a cross-country league organised by clubs for clubs which was started initially to entice women who had trained for the women’s mini marathon to keep racing over the winter months — and to join their local clubs.

Sunday’s two-mile race was hosted by a crack crew from Dunboyne AC in the well named Cow Park, a local field that can be challenging in wet conditions.

Fortunately the weather behaved and with the finish line in sight, Aoife Carroll of Sportsworld AC sprinted away for a solid victory in 12 mins 12.59 secs. Second in 12:13.04 was Niamh Corby of Crusaders AC, third in 12:13:09 was Christin Scollard of Blackrock AC and fourth in 12:13.14 was Sinead Tighe of Brothers Pearse. Yes – it was that close!

Among those running was almost the entire Dublin Marathon team from Waterstown Warriors; although Anne O’Donnell, winner of the W75 title in both the national and Dublin championships, was taking a break.

Other teams who had entered teams included Donore Harriers (among them the Donore Divas and the Donore Dawdlers), Esker, Love2Run, Lucan Harriers, Clonliffe Harriers, Waterstown Warriors, and host club Dunboyne.

Teams will be graded for the next round, but in the meantime , Crusaders lie top of the table ahead of Sportsworld and Blackrock. Since the league consists of four rounds with the best three results to count, new clubs are welcome to join in the fun. Contact is Fiona Shine of Crusaders AC at fionashine@gmail.com.

Killian Mooney of Dundrum South Dublin AC and Sorcha Loughnane of Donore Harriers were the winners of the IMRA Powerscourt Ridge 16km race held in challenging conditions in Co Wicklow on Saturday (November 26). A shorter 7.8km race was also held. No times available yet.

At the opening round of Track and Field Live (NIA Live rebranded) in Abbotstown on Thursday (November 24) , Jodie McCann of Dublin City Harriers own the women’s mile in 4:55.08.

Winner of the men’s race at the 57th annual Hollymount Road Races in Co Mayo on Sunday, November 20 was Michael Flanagan of Galway City Harriers GCH after a ding-dong battle with David Hickey of Westport AC, with the pair timed at 35 mins 41 secs and 35:48. Michael was following in the footsteps of his father Tom who had won the race in 1967.

Eamonn Joyce of Mayo AC, fresh from a solid outing at the Dublin Marathon, moved into third place on the final lap to cross the line in 35:50.

For the first time, both men and women ran 10km, with Mayo AC’s Norah Newcombe Pieterse finishing seventh overall in 38:06. Second was Sarah Byrne in 0.13.