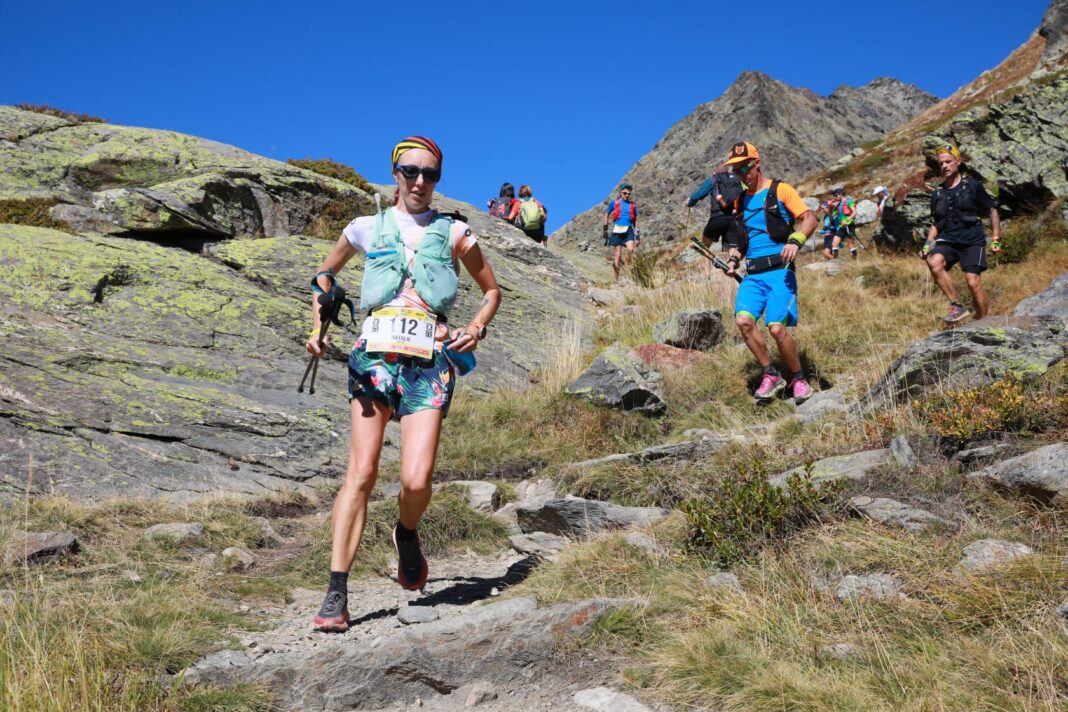 This year we featured two runners preparing to take on races at the Tor des Geants in the Aosta Valley, Italy. Both have since spoke to Robbie Britton about their experiences.

Natalie White and Paul Tierney were no strangers to the Aosta Valley. Back in 2016 White, a former British & English fell running champion, made a grand leap into ultra-running by finishing 11th female in just over five days and All-Ireland hurler Tierney has finished no less than three (well, three) Tor des Geants and lined up for the longer 450km Tor de Glaciers this year.

So what did they enjoy about the races this year? What keeps them coming back? Italy based White interestingly came back with the four subjects of “Food, scenery, people and pain” that she enjoyed. Tierney, with less people around for most of his race, still mentioned three of those four. The people always feature strongly in why this race is so special.

“The encouragement on the course is always amazing,” reminisces White. “So many smiling happy faces to help you through those tough moments.” Each life base is staffed by volunteers on 8 hour shifts, local people delighted to have you come to their home town to race.

An army of 3000 volunteers make the race possible, as some checkpoints are open 24/7 for several days as the runners come through. Tierney remembers that “even in the more remote rifugios of the Tor des Glaciers, people were still always on hand to help you. It felt like you were part of a whole team of people working together, across Aosta, to help you succeed in your race.”

Every runner is supported so well at each checkpoint and the bigger life bases (where you have access to beds, showers, physio and your iconic yellow drop bag). Then you have the additional support of your individual team, something White was really grateful for, even if one of them was rather sarcastic at times.

“I really enjoyed coming into each life base to see my crew, my husband Robbie and our friend Rob [Sinclair]. They were always smiling and we always had such good banter. They made sure I wasn’t just carrying my food from life base to life base like a weird flapjack smuggler in the Italian mountains.” Which brings us onto the next section. The food. Any visit to Italy is a gastronomic adventure, but no more so than the Tor des Geants. Hot food and drinks are prepared for the runners throughout, after they nearly all go off the idea of sports drinks and gels on day one. Each life base has a fully stocked kitchen and places like Niel had huge cauldrons of home made polenta ready and waiting.

“I really knew I had to fuel really well in the Tor to keep moving forward” says White. It’s one of the main things she has worked on in the time between 2016 and now. “After the Chardonnay check point with a big bowl of fresh pasta and some ice cream I became more and more hungry.

I fuelled really well along the way on bowls of pasta, Pot Noodles, chips, cake, cheese, crackers, flapjack and whatever else my crew had stuffed into my pockets at the life base. Each checkpoint I made sure to eat and even had to barter for an extra bit of cake at one of them.”

“We were a little more remote,” said the Irish Inov8 athlete. “So it was great that some of the refugios would freshly prepare food for you when you arrived. It was at Refugio Perucca-Vuillermoz, up at 2900m altitude, that really stands out. At 4:30 in the morning they made me fresh stew and potatoes. I’d been there on my recce and met their dog, called Spock, and they were just lovely people.”

In between the eating food and meeting people at life bases and rifugios there must have been something a little more about this great event that sees thousands apply and take on the races each year?

Three time Tor330 finisher Tierney might have seen it all before but not the whole 450km route. “The Glaciers route takes you into some really remote terrain and some of it was really stunning. There were moments where you looked up and the scenery just took your breath away (or that could have been the altitude). The Gran Paradiso National Park was one of the areas that really made it worth all the effort.”

For Natalie White it was a second visit to the race and there had been a lot of time spent in the beautiful Aosta region since too, but this time round a stronger performance also meant an almost entirely different view of the landscape too. What was day, became night and vice versa too.

“This time I ran the Tor felt like a totally different race. I was much faster than last time, so for most of the event that was in the dark last time was in the daytime this year. Seeing the scenery in a different light, that I hadn’t seen before, was just magical. A lot of the colours were turning that beautiful golden colour of Autumn.” The last thing that Natalie mentioned about her experience? Something inevitable, but also one of the great unknowns from the start-line. “That pain you feel or know you’re going to feel, you just never know how you will manage on such a big event.”

It’s all just part and parcel of the Tor and you need a strong mindset to keep moving forward. At times I would forget about how painful it is got me and other times it will drive me onwards, to the finish line quicker.”

Was it painful in the Tor des Glaciers too Paul? “Fuck yeah.” Would you go back? “Yes definitely”.

Each year we try to bring an insight into what I feel is one of the greatest races on the planet. Hopefully this helps. One thing that’s sure, it won’t be the last time either of these runners race in Aosta. Would you do it again? Photo: Alessandro Dini

✅ Do This For Knee Pain 🩹… #health #wellness #healthandfitness