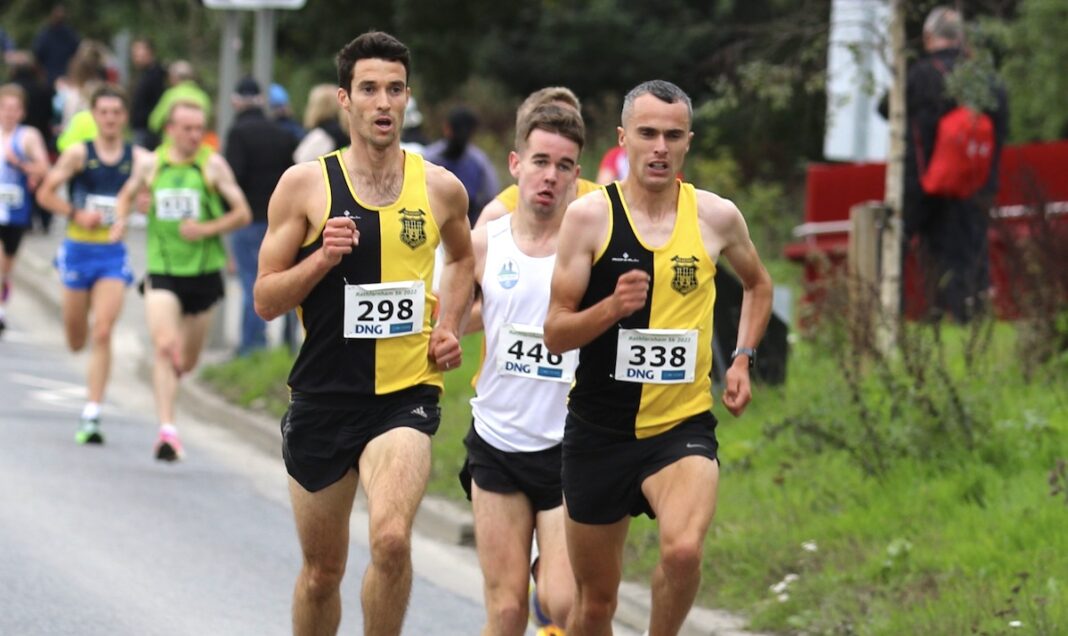 Once again all the action comes from Lindie Naughton and starts with some fast running in Berlin and the EcoTrail Wicklow continues to impress as a must-do event.

Íde Nic Dhomhaill was first of them finishing in 2:38:11, followed by Grace Lynch of Iveragh in 2:38:18 and Ide’s sister Sorcha in 2:38.19. The Nic Dhomhnaill sisters have recently transferred from Donore Harriers to West Limerick AC. For Lynch, impressively, it was her marathon debut.

A large Irish contingent had lined out with Conor Duffy of Glaslough Harriers clocking a time of 2:17.06. Other women running included Niamh Clifford, now with Donore Harriers in 2:45.54, Helen McCready of Rosses AC in 2:51.52 and Emma Furey of St Laurence O’Toole AC in 2:56 mins.

An intriguing result came from Teresa Murphy, running in the W45 class, who is a member of Kent AC in England and finished in 3:00. 59 – one second off her personal best set in 2019.

Running in the W50 class was Anne Curley of Donore Harriers who finished eighth in 3:07.41, while in the M65 class James Cottle of Crusaders AC finished second with a time 3:04. Dropping out after going through halfway in 66:40 was Stephen Scullion of Clonliffe Harriers.

A day earlier, Mayo woman Sinead Diver, who runs for Australia, won the Sydney Half Marathon in a time of 73 mins 7 secs — well off her best time of 68:50 run in February 2020.

A real sprint for the line in Rathfarnham

Eoin Everard called on his vast track experience to win the sprint for the line beating his Kilkenny City Harriers team mate Gerry Forde by a single second. Everard finished in 14 mins 31 secs, followed by Forde in 14:32, Kevin Moore of Dundrum AC in 14:33 and Luke Johnston of Moy Valley in 14:45.

First woman was Mary Mulhare of Portlaoise AC in 16:05 – her first win in quite a few months. Laura O’Shaughnessy of Galway City Harriers was second in 16:16, while Lisa Madden was third in 16:25.

Highlight of the Charleville International Half Marathon, also on Sunday, was Shona Heaslip of An Riocht AC’s debut over the distance.

Heaslip duly finished first woman in a time of 75 mins 4 secs. Overall race winner was English athlete Jonathan Escalante-Phillips in 66 mins 21 secs. Sergiu Ciobanu of Clonliffe Harriers was second in 66:24, Josh O’Sullivan-Hourihan, of Donore Harriers , who is better known as an orienteer, third in 67:04 and Mick Clohisey of Raheny Shamrock AC fourth in 67:57.

Leevale AC pair Niamh Moore and Lorna Wolfe finished second and third of the women in times of 80:39 and 83:26 respectively. After winning the national half marathon title a fortnight ago, Yared Derese of Carrick Aces sauntered to an easy win in 74 mins 01 secs at the Monaghan Half Marathon. Declan Sherry was second and first M50 in 76:26. First woman in 92:21 was Charlotte Connolly on Monaghan Town Runners.

In Co Kildare, Brian Cory of Clane AC was the winner of the Naas Town 10km in 32 mins 36 secs. First woman in 40:49 was Yvonne Sweeney of Lambay Sports Academy.

Ben Branagh of St Malachy’s AC was the winner of the Bangor 10km, incorporating the NI and Ulster Championships, on Saturday (September 24) in 29 mins 54 secs. Second in 30:12 was Gideon Kimosop of 1Zero1 Enniskillen while third in 30:29 was Eskander Turki of Annadale Striders.

Fifth and first M35 in a time of 30: 34 was John Craig of Annadale Striders who took up competitive running about three years ago and to date has notched up wins in the Irish masters 5000m championships and in the North v South (Ireland) Masters cross-country match held last November. See Lee Maginnis’s chat with Craig here.

First woman was Jessica Craig of North Down AC in 34:40. Natasha Adams of Letterkenny AC was second and first W45 in 34:49 and Sarahjane Cooke of Annadale Striders third and first W40 in 37:38. A stunning new record for the 80km course was just one of the highlights at EcoTrail Wicklow which took place on Saturday (September 24).

Winner of the 80km was Luke Grenfell Shaw from Bristol, whose time of 6 hrs 39 mins 23 secs knock an hour off the old record. Shaw has a remarkable tale to tell having been diagnosed with a fourth stage sarcoma cancer at the age of 24 four years ago. Earlier this year, he completed a cycle to China and back in aid of cancer charities.

The course, which started on Bray promenade, went as far as the Vartry reservoir in Roundwood, taking in the Little Sugar Loaf and the Sugar Loaf itself as well as Djouce woods along the way.

Second in 7:37.35 was Ricki Wynne, while in the battle for third place, David Barry managed to hold off a fast finishing Lianna van Dijk, who was first woman. Barry, who was first M50 finished in 7:50.56 and van Dijk in 7:51.05 Of the 110 starters, an impressive total of 102 finished, with Jeni O’Regan, Gordon Glenn, Domingo Torres coming in together in 12 :23.26 and closing out the day’s actitivites. Also in record breaking form was Tudor Moldovan of Clonliffe Harriers, who won the Lap of the Gap marathon in Wicklow earlier this summer. In the 30km, Moldovan quickly build up an impressive lead and finished in 2 hrs 25 mins 15 secs. Over eleven minutes behind him in 2:36.19 was Allessandro Favero. First woman in 3:01.39 was Eimear O’Brien.

Winner of the Glen of Aherlow Half Marathon, also on Saturday, in a time of 98 minutes exactly was Caoimhín Vallely from Cork. Second and first woman in 99 minutes was Keeley Tideswell of Clonmel AC. Henry Micks from Dublin won the Aherlow 50km in 4 hrs 6 mins 21 secs. First woman was Becky Quinn in 4:55.05.

In the Mourne Mountains, Adam Cunningham of Mourne Runners won a closely fought Buzzards Roost race over the peaks of Lamagan and Binnian in 74 min 56 secs. Second in 75:23 was Jonny Steede of Glen Runners while third in 75:44 was Joshua McAtee. Alice Flint of BARF NI was sixth overall and first woman in 80:37.

The race was the final round of the 2022 NIMRA Championships.

Andrew Coscoran was a clear winner of the men’s 6000m race at the annual cross-county races organised by his club, Star of the Sea AC at Greenanstown, Stamullen, Co Meath on Sunday (September 25).

In a well supported women’s 3km race, Laura Buckley of Dunboyne AC was the winner in 11:02, followed by Lauren Murphy of Cilles AC in 11:04 and Meabh Eakin of Dunleer AC in 11:18. Mullingar Harriers were first team ahead of Naas AC and Na Fianna, with Star of the Sea taking the W40 team prize.

Cian McPhillips of UCD AC, who is a native of Longford, ran the fastest time at the Ray Flynn Mile, in St Mel’s, Longford, on Wednesday (September 21). McPhilip’s time was 4 mins 17 secs. Fastest woman was Emma Brennan of Longford AC in 5:20. Fast U14 boys and girls were Emmet Muldowney in 5:07 and Sophia Carey in 5:43.

Are Cher and Alexander Edwards Dating?

5 Body Positive Mantras For a More Beautiful You