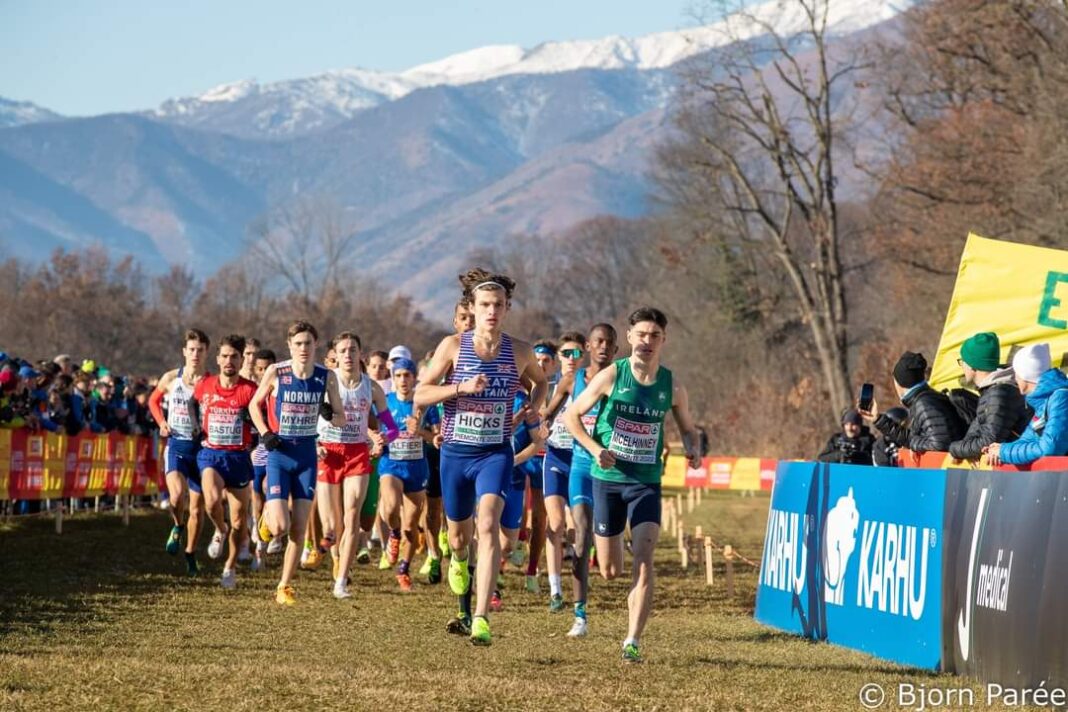 Nick Griggs of Mid-Ulster AC proved the star of a strong Irish team at the European Cross-Country Championships in Turin, Italy on Sunday (December 11) running himself into the ground to finished second in the U20 men’s race.

From the start of the race, a determined Griggs had shared the lead with British athlete Will Barnicoat but the hilly and technical course with lots of twists and turns soon took its toll.

Coming into the finish straight, Griggs was in the leads but galncing anxiously backwards. With about 20 metres to go, his tired legs gave way, allowing Hicks to swoop past and take the title. There was still much to celebrate with Griggs in second place followed by Dean Casey of Ennis TC third, which meant that for the first time at these championships, Ireland had two athletes featuring in the top three.

When Sean McGinley, the third team counter, finished twelfth, it meant silver for Ireland behind a rampant British team and three three medals from an eventual total of five for Ireland at the championships.

In the U23 men’s race, Ireland were defending champions with Darragh McElhinney of UCD AC aiming to go one better than last year when he finished second behind Charles Hicks of Great Britain, with both athletes still in this age group. When the pair took off together a repeat of last year’s race was in prospect, until McElhinney suddenly fell back after clearly struggling on the courses’s steep, vicious hill. An untroubled Hicks went on to win.

It was left to Efrem Gidey of Clonliffe Harriers, who had never been far off the pace, to lead the team home in fifth place. With Keelan Killrehill ninth and Shay McEvoy 15th, the team took team bronze. A brave McElhinney played his part, hanging on to finish 26th.

A second and more unexpected team medal came in the senior women’s race where the twins Eilish and Roisin Flanagan of Finn Valley AC ran together all the way finishing in 11th and 12th places. When a battling Mary Mulhare of Portlaoise AC pulled herself up from 64th to 27th place, team bronze was assured.

Irish cross-country champion Sarah Healy of UCD AC had hoped for a strong showing in the women’s U23 race but was forced to pull up with a foot injury early in the race. Her UCD AC team mate Danielle Donegan led the team home in 27th place; the team finished seventh.

There was good news however from this race when Northern Ireland’s Grace Carson, like Nick Griggs, a member of the Mid-Ulster club, finished fifth, helping the British team to gold.

Finishing a strong fifth in the women’s U20 race was Jane Buckley of Leevale AC.

Graham Gilshinan of Portmarnock AC and Sorcha McAllister of Dublin City Harriers not only took the individual honours but also led their their teams to victory on a bitterly cold afternoon at the Dublin Inter Cross-Country in Tymon Park on Sunday (December 11).

McAllister led the women’s 5000m race from the start and finished almost half a minute clear of the chasers in 20 mins 38 secs. Aisling O’Connor of host club Rathfarnham WSAF AC was second in 21:07 and Aoife Carroll of Sportsworld AC a close third in 21:09. In the team competition, Liffey Valley and Donore Harriers finished behind DCH.

Gilshinan, a relative newcomer to running, was equally dominant in the men’s 8000m, finishing in 28 mins 39 secs. Cathal McCabe of Clonliffe Harriers was second in 28:51 and David Power of Rathfarnham WSAF AC third in 29:19. With four in the top twelve, Portmarnock beat Donore Harriers by four points for team gold. Sportsworld AC was third – just a single point ahead of Liffey Valley AC.

The day before for business

A day earlier, the Business Houses Athletics Association had launched its cross-country season with a combined 6km race organised by BNP Paribas over a new course at Dodder Valley Park, Tallaght. After a tough battle upfront, Ieuan Hopkins, running as an individual, pulled away to win from Colm Turner of Garda in 20 mins 8 secs; Turner finished in 20:14. Michael Kiely of Nypro Ltd was third in 20:57.

Finishing fifth and first woman was Niamh Allen in 21:17. Laura McDonnell was second in 22:38 and Laura Buckley of the Teachers team third in 22:47. In the graded team categories, Bank Of Ireland beat ESB to win Grade A, with Garda third. Banking and Finance A won grade B, beating six other teams. Revenue was first in grade C and Dublin City Council the winners of grade D.

Health Group C was best of the women’s teams. Despite the challenging weather conditions, an impressive total of 178 completed the race. Next BHAA fixture in the Dublin area is the Bank of Ireland 6km Cross-Country in Tymon Park on Saturday, January 7.

In Cookstown, also on Saturday (December 10), Adam Kirk-Smith of Anndale Striders was the winner of the men’s four-mile race at the Irwin Speirs Memorial Cross-Country, organised by Acorns AC.

Jimmy Sloan, also Annadale Striders, was second in 21:45, with Sean Melarkey of City of Derry Spartans a close third and first U23 in 21:47.

Conor Bradley of City of Derry Spartans finished third and first M35 in the Telford 10km in England on Sunday (December 11) narrowly failing to break 29 minutes when he crossed the line in 29 mins 01 sec.

Andrew Milligan of North Belfast Harriers finished tenth in 29:19, while other Irish finishers included Thomas Moran of Dunshaughlin AC in 29:48, John Paul Williamson of Derry Track in 30:08, Jamie Fallon of Craughwell AC in 30:29, Jessica Craig of North Down AC in 34:06, and Meghan Ryan of DSD AC in 34:32.

Evan Byrne of Togher AC and Sinead O’Connor of Leevale AC were the winners of the Newmarket Christmas Classic 5km, in Co Cork, also on Sunday.

Despite the bitter cold and the icy road conditions, the race course itself was not affected, with Byrne finishing in 14 mins 28 secs followed by Niall Shanahan of An Bru AC in 14:39 and Gavin O’Rourke of Leevale AC in 14:52.

O’Connor was a clear winner of the women’s race in 16:27 followed by Edel Monaghan of Dublin City Harriers in 16:49 and Hannah Steeds of Leevale AC in 16:56. First wheelchair and an impressive third overall in 14:47 was Paralympian Shauna Bocquet of Craughwell AC.

How to Live Your Dream Life