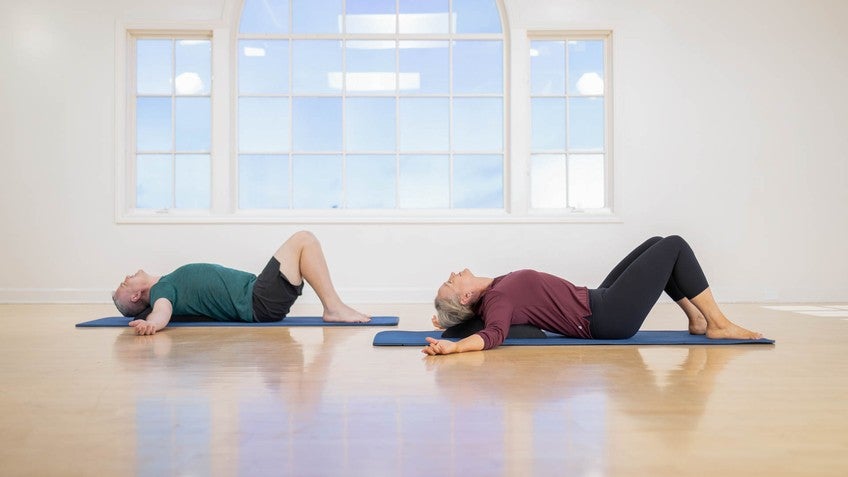 
Hello, I’m Sally Anderson and welcome to Reach Movement Health’s Calm and Centered work. Andrew Aroustian is with me today to help demonstrate. Our Reach Movement Health, Calm and Centered program is a training course looking at reducing and managing stress and anxiety. Our daily lives and the expectations on us every day now commonly lead us to being in our fight-or-flight mode or in our sympathetic nervous system, more often than we need to be. With simple strategies and tools we can either reduce the amount of stress and anxiety that we endure or learn to manage it.


Our Calm and Centered training course for Pilates and movement teachers helps you to understand the physiological responses that happen in the body when somebody is under stress or anxiety. And then as we do with Reach Movement Health training, we provide simple, efficient ways of introducing movement that will focus on managing that, focus on helping to reduce stress and anxiety. So that’s where our Calm and Centered programs and Daily Doses can become part of anyone’s life so that we can go on living these fantastic lives we have, but with our own autonomous ways of being able to manage our lives and pass that on to our clients. One of the essential props we have for Reach, Calm and Centered are Spine Arcs. We’ve been developing these specifically, like I say, for Calm and Centered programs, but we’ve also integrated them into some of the other Reach training programs.


But what we have is essentially an arc that is even down both slopes from the center, but it’s narrower. So this, it kind of, your spine lies along here, hence the Spine Arc. And it will really help to provide an opening of the torso or of the body or put us into positions that we want to induce the responses we want. Now, we have two here. We’ve got a firm one and we’ve got a softer one.


The softer one provides a little bit more proprioceptive feedback but the firmer one can be really nice for encouraging the positioning or the response we want. We’re gonna use the firmer one today. And we will start with learning a breathing technique. The Calm and Centered work incorporates several breathing techniques, but also then sequencing and programs that bring all our breath work and movement together. Right now, let’s have a look at the calm breathing and I’ll ask Andrew to lie back on this Spine Arc.


I’ll also ask him to stay awake while we do this. But now what I like to do is find every individual person’s position on the Spine Arc. So we’ll take Andrew over just to show you where we’re going to begin with, good. We’re going to go into quite a bit of extension and I quite like this position for Andrew. How do you feel there?


Great. Good. What I’m looking at in terms of positioning somebody on the Spine Arc is how much extension I can put their upper torso into without putting them into discomfort. So I want the head and neck to be supported. I want the lumbar spine to be either controlled or supported or feel fine.


If Andrew feels fine there, which he’s given me a little wink and said he does, then I don’t need to tuck or have you posterior tilt. And this can be an exploration for every person individually, they can find their position. But having somebody understand, start in a relatively comfortable position but with some extension and over time progress into more extension. That’s what I want people to find on the arc. So we’re quite comfortable here and I’m going to have Andrew take his arms out to a T position.


All I want here is the arms are relaxed, the head, shoulders, lumbar spine feel comfortable. I’m happy with legs in a bent leg position. We could open out for a butterfly position if that felt more comfortable for somebody, because I want it to be passive here as we go through the calm breathing work. I will still have Andrew in the bent leg position today ’cause I think that’s a nice comfortable position for his hips, his body. Arms are open to wherever they go.


So if they’re hanging, that’s great. We’re gonna get some nice passive gravity-assisted release through pecs, front of the chest. And I want Andrew to think about breathing into the torso. So you’re going to think about getting as much expansion of the torso, opening the ribs, letting the tissue release so that the organs get more space. We’re going to do this over my Calm Breathing sequence.


I do this by counting one elephant, two elephant, three elephant. That’s how I count seconds. You might find another word that’s like one princess, two princess. Find your word that gives you that second. And I promise you one elephant is a second.


Four, five, exhale. Let all that air go. And we held inhale last cycle. Hold. Exhale. Hold, good. Just stay there. I’ll ask Andrew just to bring his arms in beside him, maintain that position on the arc.


And so that Calm Breathing sequence is based on a vagus nerve stimulation. It’s not specifically that, but drawn from, inspired by. But it allows the body just to calm, to find the brain centered into the body and expand the torso with the use of the Spine Arc. Now, we can do that calm breathing lying flat, sitting in a chair, before a meeting. Any time that you feel you need to reduce the stress, reduce your anxiety, bring yourself back into your body and find more calm, just use your calm breathing.


In the car, in the traffic. Perfect. So it doesn’t have to be on the Spine Arc, this just allows us more access to the expansion of the torso, room for the organs and reverses that flexion curve that tends to compress our organs. So we’re getting a whole lot of benefit from being over the arc. If you don’t have the arc, towels are great, use a roller. And I might ask Andrew to pop his hands under his head, and scoop into the chest lift just to bring your head up, using the hands to come off there and sitting up.


And let’s have a look at how you might use a roller or towels to emulate what we’re doing with the Spine Arc. Roller and towels. Let’s start with the towels. We’ve just rolled up a decent size of toweling but depending on what feels right for you or what feels like it would be right for your client, it can be smaller. We’re just, as you know, trying to give some expansion to the torso. If Andrew rolls back down here, what I would do then is place it under the upper back so that the head just comes off.


That again then is going to be, do you want that much towel or do you want it to be smaller? So that the head’s not in as much extension. Or do you wanna even just, pop your head back down, pop a little pillow under there to help support the head? You can prop that any way you like. Using hands to come up.


The idea with the roller is not to put them over the whole roller, but come on down Andrew. I’m gonna try and get this roller kind of there on his back. I want you to roll back into it. Head, shoulders are an extension, but see, we still have that opening of lower ribs. So 12th ribs are able to expand the chest, the arms.


If Andrew takes his arms out to a T position, it’s not dissimilar in terms of the way the body is extended in the upper quadrants. That would be hands behind your head, come back up again. That’s just giving a little help to the neck. If somebody’s familiar with that on and off the arc, then that becomes less necessary to cue. But that gives you an idea of how to use the roller or towels if you don’t have a Spine Arc.

Staying Home vs. Going Out with The Founder of BODY Vodka