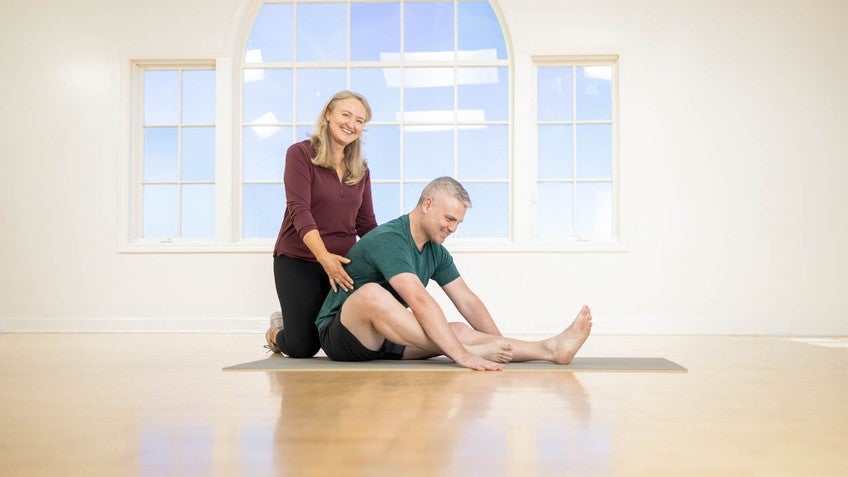 
Hello, I’m Sally Anderson, and we are going to do a daily dose of calm and centered movement. Andrew will be demonstrating for us, we only need the mat. To get into our starting position, I’ll ask for arms to come up into a diagonal position, so directly out from shoulders resting on the floor. Legs will mirror that, so the legs will come out to a diagonal position. So, you could think about going to the corners of your mat, and then just allowing that long line, open line to be very passive, very relaxed.


Really let the air go on the exhale. Hold it for two. Now, we’re taking that calm breathing into a starfish roll. Let’s look to the right hand first. It’s Andrew’s left.


And then, follow that hand over as the hand drags the body over into a long line between fingers still on the floor, foot still on the floor. Hot for that hold two. Follow the hand back, the hand drags the body, all the way back to your starfish position where you’ll hold two. Now, let’s put that together, look to the other hand, take that across, dragging the body with it on your inhale for five seconds. Hold for your two seconds.


Let the air go as you come back, find your starfish, one last repetition. Hand comes across. It sinks into the floor as you hold, let the air go as you come back. Pause, so that’s very calming, now we’re bringing the arms and legs together overhead with the arms together on the mount with the legs. For our hollow rock, I want you to think about going so far away from each other with the arms and legs, that you float up into a very gentle lifted position, even hands and feet, and then let that fold down.


So, now we’re just flowing breathing. You can choose inhale or exhale as you lengthen, lengthen, and lengthen, and we get a hollow rock. And then, lengthen as you come down, we’ll do two more, so this is very centering, we’re taking this now into really drawing the center in reaching the arms and legs long, and then lengthen that back down, we have one more. And really nice, deep length and core work, stay there, bring the arms around beside you, bend the feet into your preparation for the pelvic curl. So from here, I just want four pelvic curls, just exhale using the flowing breathing to come up, and to come down.


Good. You can choose, inhale or exhale up, whichever feels better for you. Inhale fills up the body, sends it long, exhale uncurls it back down. And two more for me. Now, once you get to the top here, just make sure you’re on the shoulder girdle as you come down between the shoulder blades, have one more, (breathes deeply) still flowing with that breath.


Knees over toes, shoulders relaxed into the mat, throat open as you uncurl back down. From here, just use the arms to help bring you up into a seated position. And we’re going into a stretch, I call it the calm and centered signature stretch. So, elongate both legs out in front of you. And then, let’s take the right leg, and bend it in so that the heel is in the knee joint or just below, and the in step wraps around your calf muscle.


Then, you’ll take both hands to the outside of the front foot, and let the head relax, let the body relax, and if flexion isn’t your thing, then this is not your thing. However, if you can just pause and allow the bent knee to drop into the floor, the leg to be lengthened, you’ll get stretch where stretch is needed. The hands support you as you stay in this position, and I want some directed breathing, you’re going to direct the breath into the lumbar spine, then exhale, let it go. We’re gonna slow the breath with this too, so particularly around thoracolumbar junction area, I wanna find, inhale, nice, long, long, long, spreading the tissue, exhale, let the breath go, one more. Inhale into that, mmm.


Thoracolumbar junction, just underneath that upper lumbus, down into the sacrum. And the last breath on this side is wherever you want to send it. Wherever it feels tight, hips could be certainly where you might send it, and pause. Stacking the spine back up, we’ll change sides. So legs long, then tuck that heel into the knee groove.


Good. Sending the breath up into the junction here, that tends to load up. Good, and this should just be softening off thoracolumbar fascia, as well as musculoskeletally, now one more breath anywhere you want it. Good. And on that last exhale, just stack the spine, coming up right, extend both legs out, and you have completed your daily dose of calm and centered.

31 Easy Art Projects for Kids of All Ages