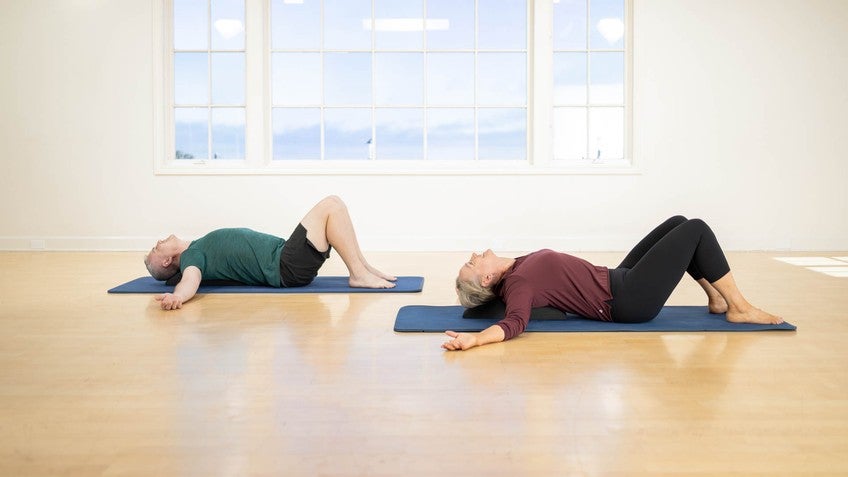 
We are going to do a Daily Dose of calm and entered movement. I’m using the spine arc, that is the firm spine arc, which gives us more opening of the torso and repositioning. So where the spine arc is, I’ll ask Andrew just to use his hands and roll back onto it, over the arc, and then shuffle if he needs to find the best position for extension in the upper torso, while the head and the lumbar still feel comfortable or not uncomfortable. So then arms out to the T position. Arms out to the T position.


Then trying to drag a little more in. You want even inhale, even exhale. Is that five? We’re moving this calm breathing into snow angel. So arms will reach a round overhead on the inhale for five.


Hold 2. Exhale 2, 3, 4, 5. Hold 2 and we’ll pause. I’ll have hands come behind the head. So just slide the fingertips in under the head and then take that position back again.


So we’re really opening the torso. Now with the exhale, I want you to slide the ribs towards the pelvis into a chest lift and the head is supported by the hands as you come just to a long line. Inhale, take that back. So now we’re moving into a flowing breathing where the exhale brings you up. Pause, inhale lengthens you back, pause.


Same thing. I want the even duration of breath over movement. So we’re going into our very familiar chest lift with a lovely opening and focus the opening or the lengthening of the torso over the arc as the priority. So it’s that inhale, allow the ribs to still open. Allow these upper ribs to sit back.


Head is supported by the hand, so you can let the head be quite a heavy weight. And we’ll do one more chest lift. Good and that’s all just upper body. You can see I want, this is quiet. Stay in the chest lift.


Now you can do one more and pause. So stay back with the head for a moment. If you are happy with the head, shoulders back there, we’re great. But commonly I like to move people down the arc just a little. We’re going to do a pelvic curl.


So I’ll let Andrew just stay there and see how the first one turns out. So from here, keep the head shoulders resting back on the arc, throat open. Exhale, curl up through the hips, send the knees over toes. And when you get to the top, you’ve got this lovely long line, throat open, head back, ribs back, leave them there. Now think of the knees going over toes as the sternum reaches for the arc.


And then you unfold the hips down. We’ve got five more. Exhale, scoop and curl. Think of the weight of the head, shoulders back on the down slope of the arc. And then really find the point of the sternum ribs to lengthen you down.


It’s got a bit of a semi-circle feel about it as you get the ribcage leading that uncurl, and going into that extension. So think about the hips as they would go into the well on a semi-circle, you’re gonna drop the hips into this little well on the bottom side of the arc. I think we have one more. Good, so that flowing breathing is the focus on the way through there as well. We’ve gone from calm breathing into that one breath cycle, flowing breathing, and pause.


Now we really, after doing that work, need to have hands behind the head, lifting the head bringing you out of the extended neck. Good and then once you’re in chest lift, hands can come down. We’re moving onto our side. We’re going into one lung breathing. So for this, I want the spine arc under the ribs right down kind of at the point of the hip there, so that the rib cage is up and over the arc.


The top leg long, bottom leg tucked in. I like that foot under the top knee. It just supports that legs of the knee. Doesn’t feel like it’s in too much free fall there. Andrew knows where we’re going.


He’s got the hand up on the ribcage. That’s where I want it to start with. And we are going to breathe here, letting the head relax on that underneath arm and allow this spine up to send the ribs up into the open position. Inhale into that hand and let that go. I like to go back to some calm breathing here.


Think about giving its space and expansion. Now we’ve got three lobes to the lung. I also want you to think about as you expand the lung trying in your mind, think about those lobes separating. Are they going to separate a lot? No, but if we can think about giving them some space and we won’t go into it in this daily dose today, but we can then kind of move those lobes or have the intention of that to really start finding some mobilization release and some expansion and deepening of the breath into the lung.


And after this repetition, we’ll just pause, bring the top hand down onto the bed or onto your mat. Use that arm to roll forward, and use the arm to help pick you up there, so that you’re not picking straight up to the side out of that very open position. We will do the other side. So turn over on your arc, finding it tucked into the top of the hip there, going over top leg long, bottom leg, the foot supporting that top knee. This side let’s do it without the hand on the ribs.


We can just leave that top arm long and then you can feel the space here. Try to fill that up with your breath. So same breathing. Hold for two, exhale, let that go. So if we can just find that relaxed position of the arm at the top and then you’ll get that feedback of trying to get the ribs up to the arm.


Good and this side’s a little tighter for Andrew. We all have our little bit tighter side or we’re not the same side to side. So here, yes beautiful exercise. For getting the sides expanding, lengthening, releasing, we’ll do two more. So inhaling that so start to think about those lobes really separating, opening expanding to the ceiling.


Bring that top hand down to the mat. Use that arm to turn onto and the arm picks the body up. And that’s the end of the Calm and Centered Daily Dose of movement. This one has very much focused on calming. So using the calm breathing and a little bit of flowing breathing.


Take those movements and that breath work into other movements that you do and allow that to bring you back to a sense of being calm and being centered.

🌿 Self Care Reset | 10 Ways to Take Better Care of Yourself