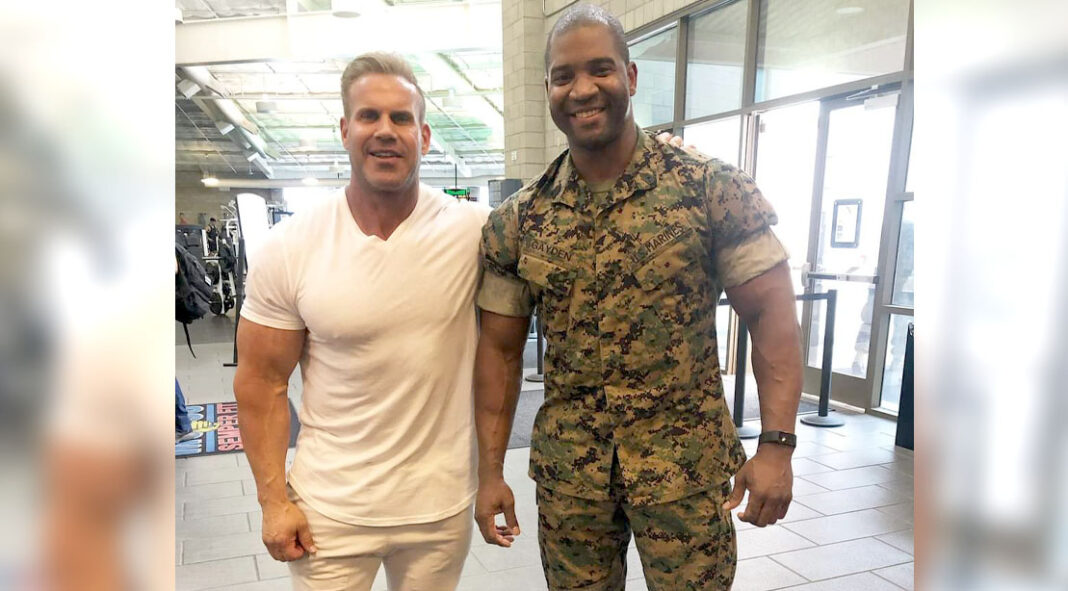 Fans of the Men’s Physique division may know the name Xavisus Gayden because he has been a IFBB Pro League athlete for several years. He has placed as high as 8th on the Olympia stage, and he will likely end up back on that stage in the future. What those fans may not know is that Gayden made history when he competed on that stage in 2014. Gayden was the first active United States Marine to compete on the Olympia stage, and he’s actually done it twice.

“I was the first one to compete at the Olympia and the Arnold while on active duty,” he said proudly. He called that the most significant accomplishment of his career onstage and in service. That passion for service dated back to his childhood.

Gayden’s uncle is a retired master sergeant for the US Air Force, and he had served in Operation Desert Storm in the early 1990’s. His uncle would send letters to the family while he was overseas, and that was what led Gayden to aspire to serve himself someday.

“I used to read the letters with my grandmother,” he recalled. “Reading those was what really made me want to go when I grew up.”

Xavisus Gayden actually grew up a straight A student all the way through high school, but he was uncertain about going to college. That combined with the inspiration from his uncle helped him make the decision to enlist in the United States Marines. While Gayden was working in the military, he committed more to training as well. He initially didn’t aspire to compete or turn pro in bodybuilding. When he learned that no active-duty Marine had ever achieved IFBB Pro League status, he decided that had to change, and he would be the one to make it happen.

“I thought that this was an opportunity that I could take upon myself and show other servicemembers that they could do it, too.”

That goal would become reality in 2013 by winning the prestigious NPC USA title, fitting for someone that is both a champion and service member for his home country. Gayden is entering his ninth year as a pro competitor, and he’s won two shows so far. One can only imagine how it felt when one year after turning pro, he would stand on the Olympia stage for the first time as one of the best in the world.

It was well worth it in his eyes, however, because he’s touched many lives through his efforts, and he’s been recognized by some of the greats in bodybuilding, including four-time Mr. Olympia and three-time Arnold Classic Champion Jay Cutler, who is legendary for his efforts to support the troops.

“He’s one of my all-time favorites because I actually personally know him,” said the Marine and IFBB Pro. “I know where his mind is, and I love the fact that he gives back to the military, which is something I want to do.”

Much like the way Cutler has inspired Gayden, his own work ethic and accomplishments in the sport served as inspiration to some of his fellow Marines as well as superior officers. However, he had to face some criticism as well.

“Some of the other servicemembers gave me grief because I wouldn’t go with them to drink. I would go train, or I would go train my Marines that wanted me to help them,” he said. Gayden may have gotten some backlash because of that decision, but he felt that he had a higher calling, even with what he had already done in service.

“It may have possibly hurt my career, but I really didn’t care. I still did it because it wasn’t about me. It was about helping the young Marines that needed it. Some of them still reach out to me to tell me that they are doing more in fitness or they are serving now because of me.”

Gunnery Sergeant Xavisus Gayden served his country from 1998 to 2019. His career saw him travel overseas just like his uncle. He even worked in Japan at one point, where he came closer with another passion of his – music, which he said was what he wanted to do when he was a kid.

“I did music when I was in Japan, and I worked as a DJ, and I went into producing,” he shared. “Now, I’m producing myself, and I’m working with other producers.”

Gayden may not have wanted to go to school when he was younger, but he would go back thanks to his passion for music. He’s already graduated from one music engineering school, and is on the verge of achieving a second degree from a music institute in Los Angeles as well. One of those producers he linked up with is Zaytoven, who has worked with several superstars of music, including Usher, Gucci Mane, Future, and others.

“He’s amazing at what he does, and I reached out to him on [Instagram] Live, and he told me to hit him up,” said Gayden. “I’ve been working with him for the last month and a half. I just got the master mix to one of my songs that we’re about to release. It’s been a long time coming, and I’m excited about it.”

With Gayden’s pursuit of music and his anticipated return to the stage ahead, the father of three and fitness coach has a lot to look forward to, and he will have more opportunities to inspire others along the way, much like he did during his active Marine career. He hopes that younger people now will consider the military because it can help them like it helped him.

“It can give you peace of mind and provide a direction that you can build on from there,” he advised. “It can help you figure out where you want to go, and it can help you get there as well.”

How to Make the Drink of The Year: A Perfect Espresso Martini