Winning Strategy: Rich Froning Keeps Rising Above the Bar in CrossFit and Life 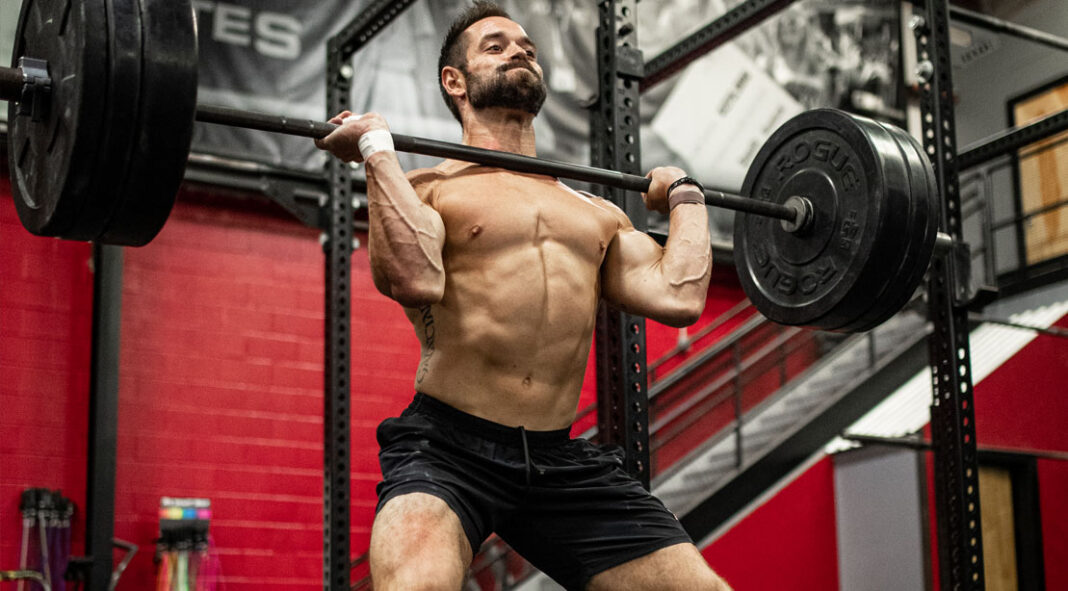 Rich Froning is more than just CrossFit’s most decorated athlete. By being its most recognizable face as well, the “Fittest Man on Earth” played a major role in helping transform CrossFit from niche workout fad to multibillion-dollar mainstream fitness juggernaut.

By being the all-time leader in Games titles, Froning also became one of CrossFit’s marketing pioneers, landing a shoe deal with Reebok and helping pave the way for many other CrossFit stars—like Mat Fraser and Tia-Clair Toomey-Orr—to help capitalize financially from their feats.

Despite his CrossFit legacy forever solidified, the former firefighter From Cookeville, TN experienced the same humbling initiation into the world of WOD like every other athlete who stepped into the box for the very first time—it wasn’t pretty.

“One of the first workouts I did was when I was at the fire station,” Froning says. “And I remember doing some farmer’s carries and burpees and then hand-over-hand hose drags. And man, I remember being absolutely completely destroyed. After that, I tried ‘Fran,” and again, I was completely fried after that workout.”

Froning went on to win four straight CrossFit Games championships from 2011-2014. This past summer, as captain of Team CrossFit Mayhem, Froning, in his final Games, earned a record-setting 10th Games championship with a sixth Teams Division title.

More important for the sport, Froning’s popularity was a great influence in CrossFit growing from just 13 CrossFit boxes in the U.S. in 2005 to more than 12,000 globally and valued at around $4 billion today.

Although officially announcing his retirement following his final victory, Froning is far from being done with fitness. These days he manages to get his workouts in at his CrossFit Mayhem  in Tennessee. “I’ve been trying to get into the [Mayhem] class workouts every once in a while,” he says. “It’s a ton of fun just to get in there and work out versus smash yourself and train.”

In addition to being able to spend more time with family as well, Froning has been able to put more hand-on work to his shoe line, the fourth version—the Nano X2 Froning—the latest in what he calls a successful partnership with Reebok.

“Reebok and I have been together for so long. And [Reebok’s senior product manager] Tal Short is such a good dude,” Froning says. “He knows what I like in a shoe. And so that makes it easy. But most of the things have been pretty hands-on over the last couple of years. I’ve been doing a little more.”

There’s a lot more to life than CrossFit titles, including family and faith. As Froning shares his Winning Strategy which includes, pushing through challenges, always looking to improve, and learning how to find your own community.

Pacing yourself for me, it really comes down to experience. I’ve been doing it for so long, I know what movements really gasp me or ones that are going to take a little bit more out of me. So trying to figure out in a workout. Is there a movement, and there’s a pace that I can hold that I know I can still push a little bit but also recover a little bit at the same time. So, it’s just kind of dissecting the workout, looking at what the overall time is going to be, what movements there are as they’re moving in there, that is kind of a stopping point for me or a catching point. And if there’s somewhere that I can kind of maybe find my pace back or find my rest back, that I have a little bit have enough to push at the end. So experience is a huge part of that.

I mean, that everybody always jokes about how good pacing and I just said, I went to that pain cave too many times. So I’m afraid to get there again. So I stay right on that edge of like, this hurts, but it doesn’t hurt to bet, you know, so. That’s, uh, yeah, I honestly I miss a little bit. Having the courage to go to that dark place at times, you know, I just can’t, can’t do it. I’ve been doing it for 13 years now. I’m like, Man, I’m good. You know, I’m gonna, I’m gonna push hard enough, but I’m never gonna go over that line. And sometimes, you need to be able to go over that line.

It feels awfully like, for a lack of a better term, being drunk. You just can’t control your body. You might into different places trying to hide from it a little bit. But that’s a good place to beJ every once in a while, not necessarily in competition but in training, you should definitely experiment where that place is for you. There’s so much technology now with heart rate monitors and stuff like that, why not try to push and see where that limit is, and what happens and how soon you can recover after that.

The one that sticks out in my brain the most is 2011 or 2010, the final event where we didn’t know what we were doing and they just pulled us out on the floor—you know, the famous Froning rope climb fail video. That’s the one that is burned in my brain the most—I was just a complete body failure at that point. I don’t even think if I could use my feet on the rope, if I would have been able to do it. So it was not a not a fun experience. That’s for sure.

Enjoy Fitness…Don’t Let It Consume You

For me, everything comes back to 2010 and putting too much pressure on myself and almost letting CrossFit become my identity. Everybody knows, my faith is a huge part of why I do what I do. And so for me, faith was my way of saying, hey, it’s gonna be OK, no matter the outcome of this. Don’t let what you’re doing become your identity. And for me, that’s been a good place for me to be able to compete.

I know that my identity is Christ and not who I am as an athlete, so that for me has worked. And I think for a lot of people, you get so caught up and thinking that you got to do this, and get so caught up in numbers and times and everything like that. But unless fitness is your profession, it should be your best hour of the day for you to relieve all your stress. You have some fun, put your body through the wringer a little bit, but once you leave there, you leave that behind. It shouldn’t be an added stress—it should be a good thing for your life.

When I worked out I have a blast when I train. I don’t have as much fun so I’m in the last couple of months. [Lately] it’s been working out for me and little little bit less training. I’ve been trying to get into the class workouts every once in a while jumping and mayhem classes. And it’s a ton of fun just to get in there, and work out versus smash yourself and train per se.

As far as products go, it’s gonna be something that I use. I don’t like to put my name behind something and not really use it. So I add a lot of input to make it super true to who I am.

I think a lot of [Reebok’s senior product manager] Tal Short, innovation with the Nano X2 Froning is that they may find something, like a material that’s a bit lighter or something that flexes a little better or find a more solid platform shape. There’s so much technology that goes into a shoe, it’s crazy. And to see what they do year in and year out, you see something new when the new Nano comes out and its like, let’s add that to my shoe—let’s change something.

The Froning X1 was my favorite shoe by far of any shoes that we’ve ever had. And so for Tal to build off that, it’s pretty cool. It’s better, but way different than the Froning X1s, that one was a slip-on, kind of boot style. With X2, Reebok wanted to go something more high performance by cutting a lot of the weight out of the shoe. You can even take the insole out, which I do a lot of times—there’s actually holes drilled in the footplate to get some extra weight out. So the shoe is incredibly light and more of a high-performance shoe than the X1, which was kind of a day-to-day, jack of all trades type shoe.

Build Your Own Community

As far as fitness goes, I personally love CrossFit. I think it’s very effective and enjoy the community aspect of it. If somebody’s wanting to do CrossFit, my thing would be, Hey, go find a good gym. Ask them if you can watch a class, see how the coach interacts? Check the community of the gym and see how it fits before you jump right in.

If CrossFit is not your thing, that’s fine. Find something that you do enjoy, like a spin class. People seem to like to find some type of group fitness is going to carry you a lot longer and further, even if it’s an online program. We’ve got online programming and a great online community with videos and stuff like that. So that might be your thing. But I think having a community that you can fall back on and be a part of is a huge, huge motivator in staying fit.

Mountain biking is my big thing right now. Anybody who’s paid attention my Instagram over the last couple months has realized I’ve gotten super into hunting and being out in the outdoors pursuing … it just feels like something I’m supposed to do and that’s how I’m wired and so that the last couple months has been a ton of fun and I see myself in the future doing some not you know sitting and waiting and doing that type of thing like actually getting out in the mountains getting lost and just trying to outmaneuver and so that’s been very good just good for my soul.