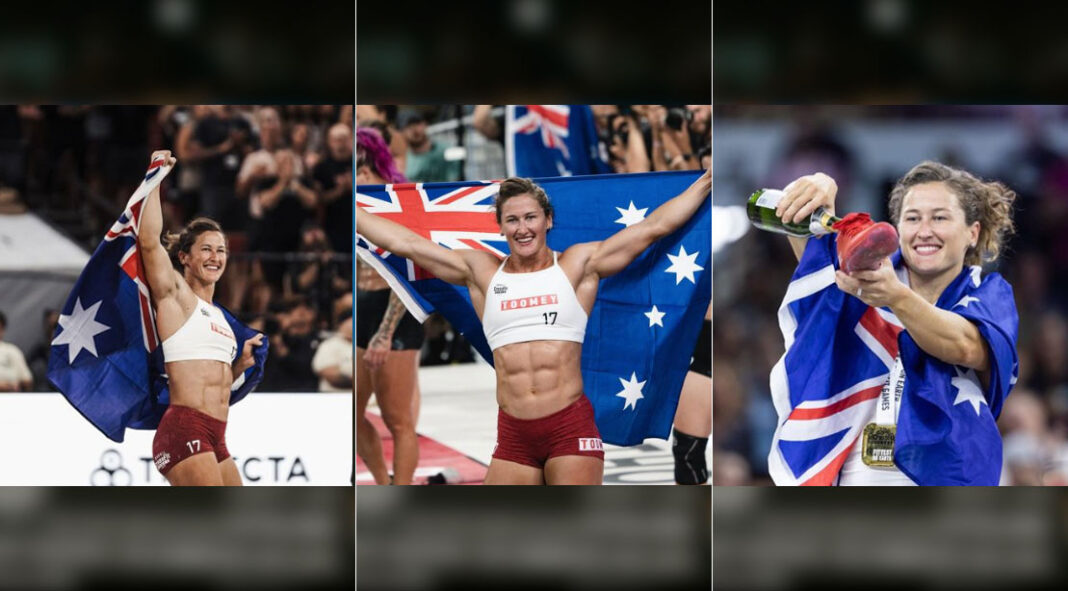 Fans who watched the 2022 CrossFIt Games saw a very familiar sight when it reached its conclusion—Tia-Clair Toomey-Orr stood atop the podium with a smile as the Fittest Woman on Earth. It would be her sixth consecutive title, making her the most accomplished individual athlete in the sport’s history. Mat Fraser won five in a row before retiring in 2020.

This year’s Games was quite different because she actually struggled at the start of the competition, adding a little drama to the week for the champ.

“I definitely made some mistakes on Day 1, and they were quite costly,” she explained. “At the world championships, you can’t make mistakes.”

While no one wants to make an error at the top competition in their sport, Toomey Orr saw the positive from it, which she feels helped her rebound well and assume her winning ways.

“I think it was a good kick in the butt. I was just like, ‘Alright, I’m going to have to fight a little harder for it than I originally wanted’ I was up for that challenge.”

Toomey-Orr’s fans appreciate seeing their champion on top once again because there were rumors abound that she would retire after the 2021 Games. If they knew everything about her road to that historic moment, they may be even more impressed.

After her 2021 victory, Toomey-Orr started training in bobsled racing, and was working with a team in her home country of Australia that had hopes of qualifying for the 2022 Winter Olympics. In spite of her team qualifying for the Games, another group of athletes were chosen to actually compete in Beijing, China.

“It was really hard, and if I’m being truthful, the bobsled experience is still a touchy subject,” she said. “I was quite angry because the outcome was not what we wanted and how it played out politically was extremely unfair.”

A driver with a higher ranking was chosen ahead of Toomey. Australia failed to medal in the Olympics, but Toomey Orr had to shift her focus because the CrossFit Games were less than six months away, and no athlete had ever done what she was going to attempt – win six titles in a row.

“I had to use that as fuel, take that anger and disappointment and use it to turn into a positive,” she shared. “Everyone goes through something like that in life, regardless if it’s competition or anything else.”

Tia-Clair Toomey-Orr credits her Proven Fitness team around her, including her husband and coach, Shane Orr, for helping her prepare for the trip to Madison, Wisconsin. Unfortunately, some things that happen are simply out of her control. Two weeks before the Games were set to begin, Toomey Orr suffered a back injury. No one outside of her inner circle knew this because they didn’t want her fellow competitors to be aware. At the time, there was serious concern about how this would affect her performance.

“It was to the point that I didn’t know if I could compete or not,” she admitted. “It was really touch and go at some points. I couldn’t help but think ‘wow, 2022 is really not my year.’”

Toomey never disclosed exactly what the exact injury was, but it was serious. After considering whether to compete or not, she decided that nothing was stopping her from reaching this goal. Coach Orr and the team around her opted to treat the injury as best and as often as they can while she limited her time training. That meant a lot of heat and a lot of rest.

“By the time that the Games were going to begin, it was really about just making sure I can move the body and compete because in the beginning, I couldn’t even get out of bed. Just bending over to tie my shoes was incredibly excruciating.”

Rest Made the Difference For Tia-Clair Toomey-Orr

As difficult as it may have been to not grab a barbell or work on techniques for the competition, Toomey Orr that rest was best because it wasn’t the first time she’s been in this situation.

During that year, she wasn’t only getting her feet wet at the Games, she was also training in Olympic lifting, preparing for attempts to qualify for the 2016 Summer Olympics in Rio de Janeiro, Brazil. Toomey Orr had trained with the injury for over a year, simply tolerating the pain. She qualified for the Olympics, but she finished in 14th place. The takeaway was that allowing the injury to heal may have helped her cause back then.

Now, the 29-year-old has been competing in CrossFit for 10 years, and she pays attention to the messages that the body gives her. More importantly, she listens, and she hopes other athletes that train for performance will follow that same guide.

“I commend my body for being able to withstand the last few years of training to be the best,” said Toomey Orr. “It’s got to be about managing it, and getting on top of it and doing the necessary recovery protocols such as getting treatment.”

One tool that Toomey Orr credited for helping her recovery and maximize her performance is her Oura Ring, a ring that helps you track sleep, activity, and readiness. She has used hers since 2017, and it’s as much a part of her program as training is.

“You can go on the app and see the differences between today and yesterday, and so on. We originally used it to track sleep, but they have evolved and added so many add-ons that’s been really helpful.”

Winning Has a Nice Ring To It

The overall strategy, including using the Oura Ring, clearly paid off because Toomey Orr is now literally one of one in her sport. No one male or female has accomplished what she has. Because of that accomplishment, many fans had already restarted the speculation about her future. She confirmed that her next event will actually be a team competition, the 2022 Down Under Championship in Wollongong, Australia.

“Originally, I was just going to make an appearance there, but they explained that there was a team division that featured three females. I was like ‘what if Brooke (Wells) and I teamed up?’ Then, I thought of Ellie (Turner), and it just kind of steamrolled from there,” she recalled. Seeing three elite athletes working as teammates is going to be a big event for the fans watching. Toomey Orr is looking forward to it as well.

“I’m excited because that’s where it started for me. When I started CrossFIt in Australia, I was a part of a gym team, and it was a big deal in our gym. It was so fun. I’m looking forward to doing it.”

She hasn’t addressed her future beyond that competition yet, but her legacy is well in place. While Tia-Clair Toomey-Orr is proud to still be reigning atop the world of CrossFit, she appreciates her role as an ambassador to fitness even more.

“It’s really humbling and a huge honor. I only grasp it when I’m at events or I might be walking a street anywhere, and I get recognized. It reminds me that I actually am touching people’s lives and making a positive difference.”