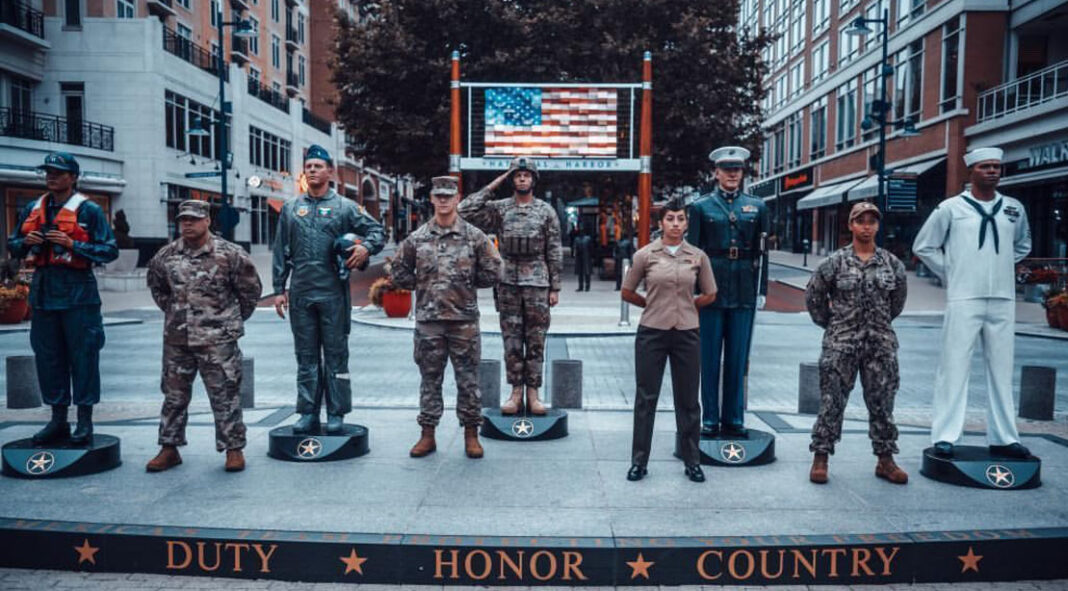 Sergeant Vanessa Hernandez of the United States Marine Corps could be considered an embodiment of fitness. Aside from regularly completing her physical training (PT) assignments that come with her job, she is also a physique athlete — competing in the NPC as a part of both Wellness and Figure divisions. She is an example that you can train and perform for both show and go. That is because she knows how to push herself beyond the point that many others would stop.

“When your body wants to stop because of that “burning” feeling [not pain], train your mind to push past it. Your body will do what your mind tells it to. Challenge yourself to go for that one more,” she said. She admitted that may not have been the case before she enlisted in the Marines.

“I was never really fit, I just enjoyed working out and seeing the progress I would make,” said Hernandez. She enlisted after graduating high school and finishing one semester of college. Hernandez didn’t have anyone in her family serve before her, which makes her a first-generation member of the Armed Forces.

A friend of mine first told me about joining, and next thing I know, I was going to be shipped out,” she joked. Her family met the news that she was enlisting with reservations.

“In the beginning, they didn’t like the idea of the military, and they wanted me to go to school instead,” Hernandez explained. “Once I showed them that I could get my schooling done, they thought that maybe it wasn’t all that bad.”

Hernandez already has an associate’s degree, and she is working toward her bachelor’s degree. She is also working towards advancing in rank to staff sergeant. Her commitment to fitness has been flourishing as well. While staying fit is part of what a Marine does, the commitment became a passion while she was on deployment.

“I was already good at running in a way, and I was really good at track. But, when I was on deployment, there really wasn’t much else to do on downtime but work out. So, I just started learning more,” she explained. “When I got back, that was when I did my first bodybuilding show in California.”

The idea to compete was sparked by seeing a fellow Marine take the stage. Seeing the possibility that an active Marine could balance work and competing was all the inspiration Hernandez needed.

She had other people that inspired her to walk onstage and face the judges. Among them are Wellness star Yarishna Ayala and 2021 NPC USA Wellness winner Julia Rene. She also credits her sister, Sandy Hernandez as a key player of support for her. After winning her first show, and moving on to Washington, D.C., Hernandez went all in on her sport. She has been working with coach Zack Blackeney, and they have been a cohesive team ever since. In 2021, Hernandez would compete in the prestigious NPC Armed Forces Nationals and the NPC Battle Royale in Alexandria, Virginia. She went on to win Wellness Class A in both contests. Being in a show that was specifically dedicated to Armed Forces members and their families made it more meaningful for Vanessa Hernandez to win.

“I think it was a neat experience to see other Armed Forces and other branches competing in the same show for the same thing. They all had the same passion, and they were all able to do their jobs and do bodybuilding. That is not an easy thing to do,” she pointed out. “There is a lot of sacrifice, and I give props to all of them. We’re all out here doing it. Being able to experience it with them gives you a feeling of camaraderie.”

One may think that the discipline and commitment that comes with serving in the United States military would make sticking to fitness easier, but Hernandez explained that isn’t the case. Following a specific training schedule and nutrition plan with restrictions on foods can be an incredible challenge. However, her ability to stick to both commitments at the level that she does has inspired those around her.

“They just admire my discipline,” Hernandez said. “When they see me eat my food, they would offer me some of what they were having as well, and I say ‘no.’ They admire that because it’s tempting to eat what they were having. They have actually now started eating healthier and working out more. I think it has influenced them and is helping them change their lifestyles.”

That ability to inspire others to do what she has been doing is now helping her launch yet another career. She has explored the possibility of coaching others based on her success. While she is early in that process, she’s already seeing the difference she can make.

“It was just so crazy to talk to clients and see how much their lives are transforming, and they are making little changes that are making them so happy. It affects me and makes me feel good.”

Her career as an athlete is far from over, and she does have her eyes on attaining IFBB Pro League status in the future. She has commitments with her full-time career that must take priority, but she and Blackeney feel she has the tools to win her pro card.

“I’m still training as if I’m going to compete, but I’m not going as strict on the diet right now,” she shared. She also mentioned that she would like to become an officer in the Marines in the future as well.

Vanessa Hernandez has inspired athletes, soldiers, veterans, and countless others by being a positive example and showing that success can be attained by anyone that is willing to put in the work and stay disciplined. For any others who are considering the military in their future, she offered sound wisdom that should be applied.

“It’s definitely worth it. Take every opportunity that you can. Volunteer whenever possible because you’re missing out on the chances that you don’t take,” she advised. “Anything you set your mind to you CAN achieve. It’s OK to feel uncomfortable when you’re learning to push yourself past your limits.”