Sailor of the Year Cale Foy Trains to Save Lives 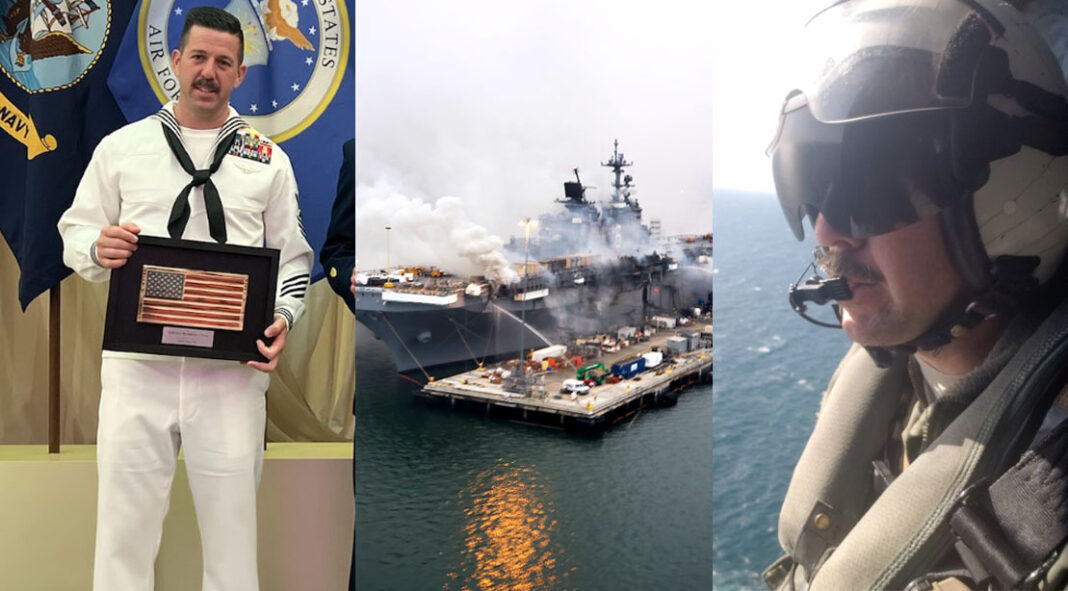 Prior to joining the United States Navy, Cale Foy wasn’t someone who focused on fitness. That all changed when he joined in March 2005. His uncle, David Foy talked to him about the Navy after Cale graduated high school. At that time, Cale was working for his father’s electrician business.

“After six months of that job, I didn’t want to do it anymore,” said Foy. David guided young Cale through the early stages of the process, but it was when he was in a recruiter’s office and he saw pictures of a serviceman jumping out of a helicopter that he knew what he wanted to do.

Fitness would become a major part of his life because of that commitment, and it’s a regular part of his life today. Training includes five days of weights and cardio as well as various drills with simulations of situations that could arise where he has to take action. All of that training and preparation was key in what would be the most memorable act of his military career.

Cale Foy had served his country and its people for almost 16 years by the time May 2, 2021 came around. While his family was on a hike at Point Loma in San Diego, California, they noticed a boat approaching shore. When Foy’s wife saw people jumping off the boat, Foy knew that he had to help. He would be joined by another person who volunteered to help.

“I would say the boat was made of 20% fiberglass and 80% wood,” he said. “There was wood everywhere. You could see life vests floating. I would say the majority of the people were chest deep with waves crashing on top of them.”

Foy didn’t recall how cold the water was at the time he went in, but he said he didn’t feel it because of the adrenaline pumping at that point. There are rocks at the bottom of the water, and they can’t see where they are stepping, which meant they risked stepping on a rock or turning an ankle before they even were able to start swimming toward the passengers of the boat.

“I’m going to say we rescued 10 to 15 people that were chest deep initially, just bringing them to shore,” explained Foy. “They didn’t know how to swim and they didn’t have life vests on. They had half of their stuff on them, and it was weighing them down.”

There was another survivor that was standing on rocks, so Foy asked him to point to the direction that he saw people struggling so he and his volunteer co-rescuer could reach them. The six-to-eight-foot waves were making the effort even more difficult, but they didn’t give up.

“We went through a rip current that took us two to three minutes to get through with waves crashing down on us. I remember getting jammed up against a rock at one point, but you just gotta keep swimming.”

At one point, Foy was able to reach a part of the boat that was still buoyant, so he took a brief break to lean on it. Even with the fiber glass digging into his arm, the short rest was crucial. He and the other swimmer could hear people screaming for help, so they quickly regrouped and moved ahead. Before they continued, Foy offered one last bit of advice for his cohort.

“When someone is drowning and you try to help them, they’re only thinking of staying above water, which means they may try to push you down. You have a decision to make. Do whatever you have to do to survive.”

Cale Foy said the partner was able to save five other people by bringing them to the cabin that was still able to float. Foy himself had saved several more as well. Once they didn’t see any more survivors, he decided to focus on recovery, pulling the bodies of those that didn’t survive out of the water as well. At one time, he was swimming with two people at once. This was all in basic clothes and without his swimming gear.

He had seen a Coast Guard boat out in the distance, but he wasn’t able to catch it or get anyone’s attention. Finally, a lifeguard boat showed up to offer more help. They rescued another survivor and were retrieving other people as they saw them. Foy was even assisting with CPR and shocks on another victim while he was riding on the lifeguard boat.

“I remember feeling the shock every time because I was still wet,” he recalled. Eventually, firefighters and other emergency personnel arrived, but they had everyone in the area clear out. Foy’s family had to go home without knowing what happened to him. Once he had time to rest and briefly decompress, he called his family to assure them he was safe. Three people wouldn’t survive that event, but Foy and the other swimmer accounted for numerous people’s lives being saved. He would feel the aftereffects of his efforts for several days after, both physically and mentally.

“I was pretty damn sore,” he said emphatically. “Working out won’t prepare you for that. Working out five days a week certainly helped, but the mental aspect is where it hit me the hardest. I had to talk to a buddy about it and get it out. I called on another rescuer swimmer because we always see the weirdest, scariest stuff.”

Foy expressed that other trained rescue swimmers would’ve done the same thing. For whatever reason, he was the one that was there and he made a tremendous difference that didn’t go unnoticed. He would go on to be honored for his efforts by being named the Military Times Sailor of the Year.

“That was the pinnacle of my career,” Foy said proudly. He actually found out that he was receiving the honor while he was on a family vacation. When he got the initial call, he thought it was a prank and actually ended the call. The person sharing the news called him back and emailed him information at the same time to confirm that he truly was being honored.

“I was used to getting weird phone calls from my friends. So, I thought it was a joke,” he said. “Of course, it turned out to be very serious.”

Petty Officer Cale Foy is currently an E6 Naval Aircrewman, First Class. Aside from the Sailor of the Year award, he’s received other honors for his bravery and commitment to serve. When asked to reflect on his career to this point, the husband and father of three wouldn’t trade them for anything in the world. He also extends an invitation to others who wish to do the same.

“Joining the military is about more than boot camp and hopefully working a 9 to 5 job. It’s about serving your country and being a part of bigger things than you in your life. If you’re the type of person that likes to serve others and make them feel better as well as to try to better yourself, we need you.”