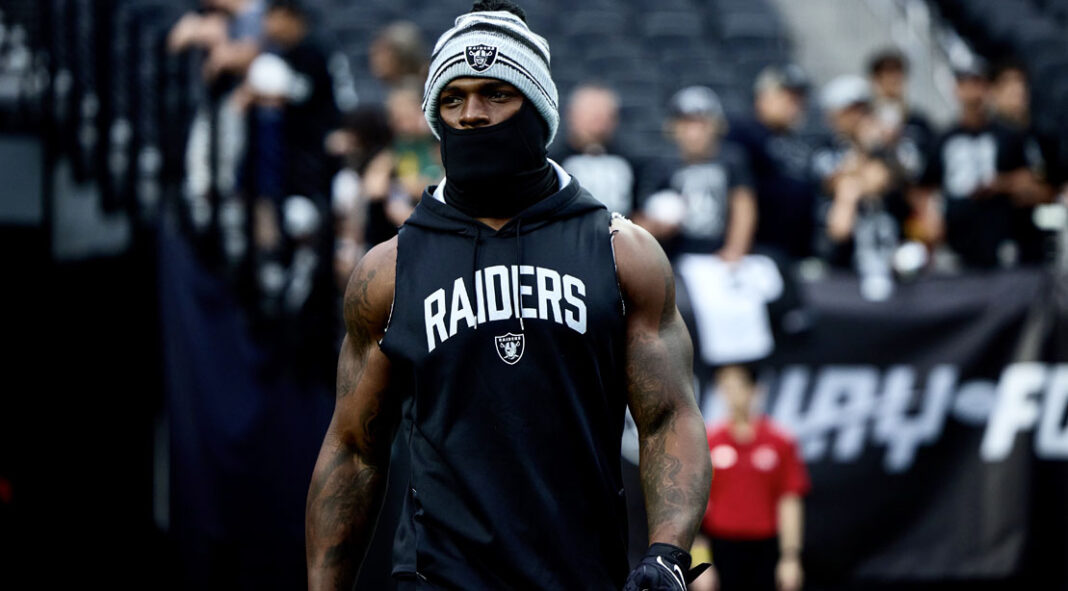 Two weeks before the 2021 season, the Carolina Panthers traded Denzel Perryman to the Las Vegas Raiders. Trades are a part of football, but what made this move upsetting for the linebacker was that he had just signed with Carolina earlier that spring.

Already motivated for the opportunity to showcase more than he got to do his final years with the Chargers, the new chip on Perryman’s shoulder hyped him even more—which led to his best season of his seven-year career.

His 154 tackles doubled his previous season high of 73 set in his rookie season. That was good for sixth most in the NFL and the most by a Raiders player since 2000. He was also the Raiders’ first inside linebacker Pro Bowl selection since Matt Millen in 1988.

Before the Raiders’ season opener against the Los Angeles Chargers on Sept. 11, Denzel Perryman spoke with Muscle and Fitness about what fueled him to have the best season of his career and what he’s learned over the years in building a routine to make sure he’s always at his best heading into training camp and throughout the season.

Denzel Perryman Is Fueled from Within

Last season was one that I felt there was a lot of internal motivation for me. I had gotten traded right before the season started. We’re professionals and we all understand it’s a business. But I had just signed to that team [Carolina Panthers]. Mentally, I felt like I was at a point where I was kind of second-guessing myself a little bit, but I was surrounded by great teammates and coaches who helped change all of that. Now with having these new guys and a new staff, it’s just resetting the clock again. It’s a lot of new faces and a new coaching system. It’s just about everyone coming together, getting acclimated with the system, and with how coach [Josh] McDaniels does things.

When the season gets closer, I’m like a little kid on Christmas getting ready to go downstairs and open my presents. I know I’m a veteran now and going on year eight, but I still feel like a young guy and that’s what keeps me going. We’re all out there to work but it’s still fun for me. I feel like if I treat this like a job — I won’t say I won’t have as much fun — but then I’ll think more like a businessman than just going out there and doing what I’ve been doing since I was 6 years old.

I probably took a month off this offseason. Everyone is different, but I really know my body now. Some people can start coming back to the facility right after the season to work out. For me, I need to give my body some time to rest. I’m working on trying to get more sleep than the hours I do get. I’m both a night owl and an early riser at the same time. I can go to sleep at 2 in the morning and get up at 5 and be able to go to practice and be fine. I know it’s not healthy, but it’s working somehow. I’m working on it. It sounds easy to just go in the room and lay down instead of just sitting on the couch.

From a mental standpoint, that month I took off was very important. A lot of people just see us as football players and not the things we go through on a personal level. That month was me getting myself together. My switch for football was shut completely off. It was me getting my mental right and making sure I had everything in order, so when the season came around, I’m not worrying about anything else. When the season starts approaching and we star getting back in OTAs, I’ll just go back and read my notes to get my mind back on football – the play calls and checks. As you get closer to reporting, you start to look at the installs and old film to get your mind locked back onto it.

Crafting A Routine For Denzel Perryman

My first couple of years, I would take two weeks off after the season and I’ll get right back into working out and not letting my body rest. Then comes training camp and I’ll have an injury and you’re wondering what’s going on. At that time, I was probably 245, so I was heavy, but I was working out every day. I wouldn’t say I was eating right but I was eating. Now, I know what I can and can’t eat and what I can do at certain times. As you get older, you figure out a routine.

I’ll work out Monday, Tuesday, Thursday, and Friday. Wednesday will be my rest day and the weekend is also the rest and recovery. Throughout those days I am working out, I’m chugging water. I’m a big chicken wing eater, and that’s all I eat. If we go to a five-star restaurant, if I see wings on the menu, I’m ordering them. It’s a lot of protein and rice, steak every now and then and some seafood. But I have to have my wings.

Putting in the Reps

As far as conditioning, I would literally run outside. I live where there’s an incline. So, from the stop sign to my house, that’s maybe a good 50-yard straight incline. I would go out there and run six of those and try to get it under a certain time. As the days go on, I’ll increase the number of reps and make the time go down. I always tell myself this, and football players can attest to it, you never really get into shape until the actual football stuff you do with your coaches. I can go run the same drills I do in practice, but my rest time might not be the same time my coaches give me.

I play a real physical game and I look for contact a lot. I’ve become smarter because I want to be able to run around with my kids. After the game, your adrenaline is still pumping so much that you really don’t feel the pain and aches from the game until Tuesday. We’ll play on Sunday, and you might come in that next day and be aching. But that Tuesday, that’s when you really feel the result of the contact. For me, after a game, my mind is still on the game and you’re really not thinking about injuries.

I know a lot of guys will get into the cold tubs after the game. Some guys will go and eat. The very next day, maybe some guys will go to the facility and take care of their bodies. I might need to start becoming one of those guys to sit in the tub after a game because I really don’t start to feel everything until Tuesday. The cold and hot tubs are really important. I’m old school and would rather sit in the tubs outside — the ones where you dump the bags of ice in, and not really know how cold it is — than sit in an actual cold tub.

Denzel Perryman and the 24-Hour Rule

After the game, you have 24 hours to get over however you were feeling about the game. After we watch the film, what’s done is done. I know my first three years, if I felt like I had a bad game, I’d dwell on it afterward and let it affect my mood. Having veteran guys and coaches over the years to talk to me, it’s helped me move on and be better from those experiences. That’s my approach now. I will go and eat after a game sometime but mostly; I’ll come home and watch the TV copy of the game just to hear what the commentators are saying or see what it looks like from the fan perspective.

Is Marcy Gym Equipment Any Good?