‘Powerhouse’ Hobbs Keeps Navigating Through Challenges To Be ‘Elite’ 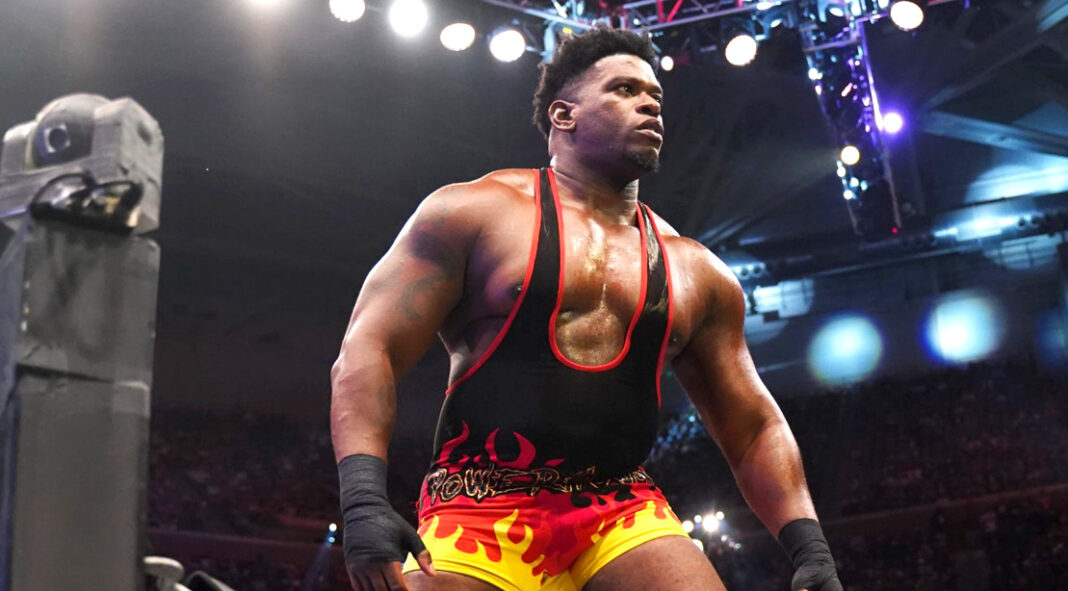 Powerhouse Hobbs is becoming a person of interest on the pro wrestling circuit. The 6’2’’ specimen from East Palo Alto, CA, is currently filling our television screens with thunderous clotheslines and devastating spinebusters during exciting matches on Dynamite (TBS) and Rampage (TNT), but next to his mountain of muscle lies flesh and blood, and a vulnerable side just like the rest of us.

Although Suicide Prevention month recently completed in September, the 31-year-old sat down with M&F at the end of the month for an open and heartfelt conversation on his inspirational journey so far.

“I grew up in a rough neighborhood,” says Hobbs. “The quick version: My brother did some things that he shouldn’t have, and he paid the cost with his life. In the process, he saved my life by pushing me out the way. Unfortunately, he got shot. I got shot. It’s a tough subject. It’s been about 12 years and it still feels like yesterday. That’s only the short version of it, but as far as the mental health thing, like I said, I come from a background where [people think that] seeking help like therapy means that you are crazy. But [having reached out for therapy], I feel great. You always want a third party, someone who is actually outside of the household to help. I have three children: two boys and a daughter, and I tell ’em myself: It’s ok to cry. My grandma used to say, whenever I used to get frustrated, that crying is like that smell after the rain so that everything is clean and sunny, and shines. And that’s the way I explain things to my children. It’s how I look at things. If you have a mental health problem, it’s alright, you know?”

September is Suicide Prevention Month. AEW is committed to the mental well-being of our talent, staff & our fans. @RefAubrey, @MadKing1981 & @TrueWillieHobbs share their message.

We encourage anyone struggling to reach out & get help: @afspnational pic.twitter.com/heulX0aGHd

“I can go [to the gym] and hit as hard as I want,” he says. “There are times when gym kicks my ass, and there’s times when I kick its ass.”

These days, Hobbs is in a great place. He’s living his dream and now even has his own action figure. This warrior is never prouder than when he gets to walk through Walmart with his children while they get excited about seeing his replica on the shelves. “It’s one of the best feelings in the world,” he shares.

Excelling as an athlete has always been a driving force for Hobbs, who bench presses in excess of 480 pounds. “I’ve been playing sports since I was 4 years old,” he says. “I grew up playing Little League, basketball, baseball, football. I was always into some type of athletics, growing up.” It was also at the age of four that he discovered pro wrestling. “That’s when I knew; when I went to my very first show,” affirms Hobbs. “In kindergarten, we wrote out what we wanted to be. I knew I wanted to be a professional wrestler. My grandmother still has that piece of paper in the attic,” he smiles.

Powerhouse Hobbs is committed to his craft

After graduating Sequoia High School in Redwood City, CA, Hobbs got serious about stepping in the ring. “It was now or never,” he says. “I went to a show, I got motivated. I ended up scraping the money together and the rest is history.”

The young upstart enrolled in the All Pro Wrestling School in Hayward, CA, and learned his craft there for more than a decade, picking up numerous titles along the way. In 2014, he used the tongue-in-cheek ring name, “Will. I. IS” before settling with Will Hobbs in 2016. Having honed his skills in a number of independent promotions, Hobbs was finally signed to the big leagues in 2020 after impressing All Elite Wrestling higherups during a one-off appearance in the companies Casino Battle Royale at the “All Out” pay-per-view.

These days, he’s known to millions as Powerhouse Hobbs. “It’s one of the hardest things that I have done,” he says when comparing pro wrestling with his many other athletic endeavors. “There are no shoulder pads, there’s no helmets. It’s your body and the mat and that’s it. It’s rough, I’ve had some injuries but thankfully nothing too serious. Wrestling’s a brutal sport.”

Pro wrestling comes in all different styles and flavors, and many fans have praised Hobbs for his smash-mouth technique, preferring the traditional hard-hitting approach over the more acrobatic moves that can often look more like a gymnastics exhibition than an actual fight. “I’m not a high-flyer, I don’t do flippy—that’s just not my style,” he says. “I like to use these fists. I like to ground and pound.” Hobbs lifts up his humungous haymakers to illustrate the damage that he can do to his rivals inside the ring.

For a big man, however, Hobbs is able to move between the ropes with the same explosive power that he picked up in his football training. He’s also been dropping body fat in order to keep up with those dastardly high-flyers. “I think the more I cut up… I’ll be more agile. That’s what I’m working toward,” says the star who has come down from 280 pounds to his current weight of 267 in recent weeks. “It’s about showing a different side of the beast, that ‘Monstar,’ you know?”

This hungry student of the game follows the advice of his coaches and nutritionists and believes that he’s made a 180-degree-turn with his progress this year. “Some days, [training] is just all agility stuff,” shares Hobbs. “It’s a lotta box jumps. Sometimes it’s sprints, sometimes it’s sprints with a weighted cable attached to me, so that I can show my explosiveness in the ring.”

Hobbs’ commitment to his art has not been lost by the match makers in AEW. Case in point: when pro wrestling icon, CM Punk made his debut there after seven years away from a pro wrestling ring, our Powerhouse was booked as his first opponent. The much-anticipated bout gave Hobbs a chance to mix it up with a man who has held world heavyweight titles and wrestled in multiple WrestleMania’s.

The Monstar repaid the trust that AEW had placed in him, and gave Punk the match that he needed in front of a red-hot crowd and millions watching AEW Rampage at home on television. “It was one of those things where I took it personal, as a challenge,” recalls Hobbs. “I think a lot of people wanted to see what I could do, and how I would act under pressure. You know, I’m a big baseball fan, and it felt like a grand slam that night.” The Powerhouse may not have won the match, but he earned millions of fans and proved that he can be trusted to go to bat at the highest level.

Away from the spotlight of the squared circle, Hobbs’ lifestyle illustrates that it’s how hard you work when off camera that counts the most. When at home, the grappler wakes up at 7am and gives his kids their breakfast while eating his first meal of the day. He then tackles the school run before heading to the gym. When traveling for matches with AEW, Hobbs finds that his mental clock still wakes him up at 7 a.m. PST, no matter what time zone he is actually in, so he tries to keep to his routine and hits the gym in the morning as usual. “

Yesterday I got up at 3 a.m., and had a 5.25 a.m. flight from San Francisco all the way to New York City. That’s right across the country,” he says. “I was tired and the plane was packed so there wasn’t a lot of room but I got to the hotel, ate, and then I had to get the gym in. I had to get it in, and I felt great afterwards. One off day means that someone else is working a little bit harder than me.” It’s an inspirational attitude that will undoubtedly put AEW gold around his waist in the future. “I just feel bad for whoever’s gonna get in my way. This is my time to shine, so everybody sit-back and watch… and enjoy.”

Pre-exhaust with 90 seconds of dumbbell side laterals and front raises for 2 rounds each.