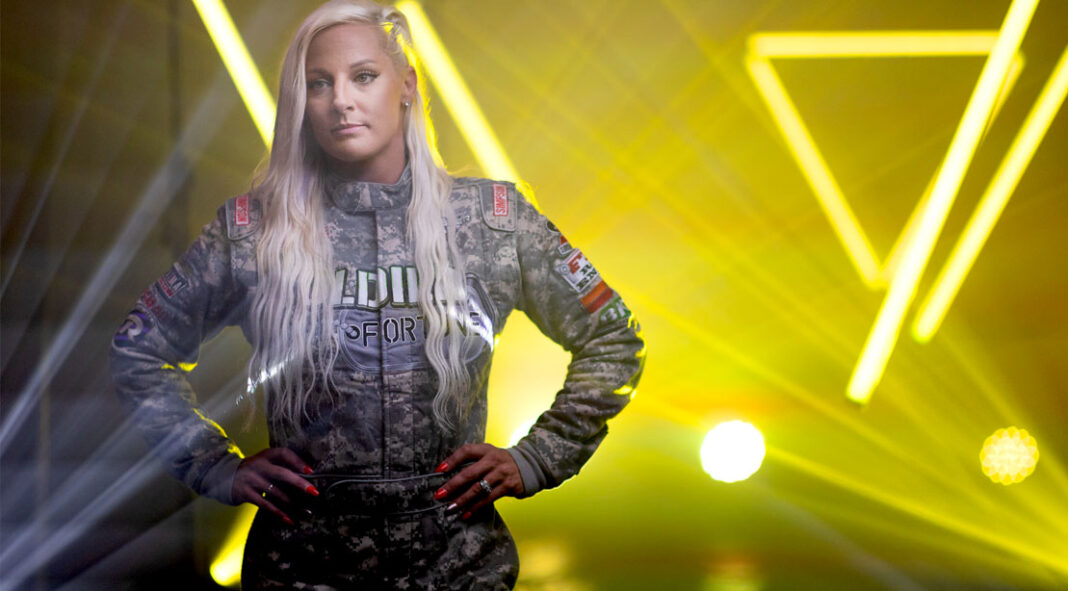 It never mattered whether the competition was boy or girl for Kayla Blood. If you were lining up against her, her mindset was to be the best. That mindset she acquired during youth athletics continued while in the Louisiana National Guard and throughout her MMA career and now serves her as the driver of the Soldier Fortune Monster Jam Truck.

In a traditionally male-dominated sport like Monster Jam, Kayla Blood is one of the women helping the next generation of competitive girls see that there isn’t anything they can’t do. After seven years in the Triple Threat series and running in smaller arenas, she’s now competing in the Stadium series.

Muscle & Fitness caught up with the Kayla Blood to discuss her first year in the Stadium Series, the similarities in stepping into the octagon and strapping into the Monster Jam Truck and how she balances motherhood, work, and helping lay a pathway for the next generation of girls.

Being on a bigger floor in bigger venues, you’re going to have longer freestyles. We’ll go from 60-second freestyles in arenas to two-minute freestyles in stadiums. When you’re doing a freestyle in stadiums, it’s no joke at all because you’re flying higher, and it’s just a lot of chaos to control. Two minutes after you finish your run, you can feel it because you’re breathing hard, and the adrenaline is pumping. Other than that, it’s just the wear and tear on your body after so long. Being in these smaller arenas, you get bounced around but in stadiums, you’re getting 30 feet of air in these Monster Jam trucks on the stadium floor so you’re feeling it in your neck muscles at the end of the weekend.

You have to find what you’re more comfortable with — whether that’s with the neck braces or the helmet. Everything needs to fit really well inside the Monster Jam Truck and that’s honestly where we’ve gotten better now compared to where it was. We have so much more safety equipment that is keeping us in our seats. Our seats are specifically designed for us, so it’s like sitting in your own car seat. When you get in there, you’re strapping down as hard as you can. I’ll take a deep breath in and out and just ratchet down. Even that is not enough sometimes. You’ll find yourself needing to tighten up a little more. I’ll try to get in there a little bit before my freestyle because I know once my seat gets settled, I’m going to have to tighten up a bit more. After that, it’s rock and roll time. We’re able to do the most insane things, have the craziest crashes and walk away with a smile on our face. You can do massages and other things to help, but I’m pretty tough and busy, so I don’t have the time to do that as much as I would like. Other than that, I like to take collagen because that’s a great thing for joints and recovery.

Kayla Blood Is Learning By the Seat of Her Pants

Every time you get inside these Monster Jam Trucks, and you do different competitions, you’re learning something new and getting more comfortable. Every year, you might end up with a whole new chassis and it’s a whole new ballgame for you and your crew chief to get together to learn together. At about the second or third event, you should be on the right path by then. The rest of the season, you get your truck dialed in and that’s when you really start having fun. I’ve been driving for seven years now and when I do get seat time, I feel a lot better about controlling the truck inside a stadium. You don’t have any boundaries or Jumbotron’s to worry about hitting. I love it and it’s been fun to drive, drift the truck around and whip it around turns not having to worry about any of that stuff. It takes a little bit of skill and a little bit of luck.

In Order to Be The Best, You Have To Beat The Best

I grew up as a tomboy, racing boys and always trying to be the best no matter what. I grew up running track and playing other sports. My coaches always taught me, if you want to be the best, you have to beat the best. I was running track practices against the boys and doing basketball against the boys. We learned at a very early age that no matter if there are males out there, we’re going to go out and compete just as hard as them. Being on this stage now is awesome. We’re able to be successful to show all the little girls out there that it’s possible and we’re even changing the perspective of non-believers of women being in motorsports. Seeing is believing and when they witness our success, that means more than anything.

I was in MMA for quite some time, and I sparred with guys. I was in the military with a bunch of guys, and I’m just used to that. I guess those experiences molded and made me very brave and confident for what I’m doing now. You need to believe in yourself to get out there and control a Monster Jam Truck. Let’s face it, women go through a lot of hate and negativity whenever we are doing this sport. Any time we’re out on the track, all eyes are on us and when we don’t have the best of luck, I feel like it’s always a little harder for us compared to the males. But we’re out there learning every chance we get in the seat like everyone else. You’re going to have great and bad moments but we’re going to continue to push forward.

I didn’t really have anyone I could look up to and I had to overcome a lot of things when I was younger. I never thought that I would be in this position, doing what I am today, and it literally only happened because I didn’t give up. Anytime I fell down, there was always something in me that said keep going. I’ll have these little girls come up to me when we have the Pit Parties before our events — some of the things they say to me and how much it means to them — you don’t realize how many little eyes are on you or how many people you’re inspiring. It makes me want to cry sometime because you think you’re having a bad day and you feel like you can’t drive some days and there’s this little girl that comes up to you and she tells you about this amazing time she had watching you drive, how you’re her favorite driver and those are the things that motivate you to keep you going. Once again, seeing is believing. Every one of these females in Monster Jam are talented and we’re all winners and beating the guys and proving it. When I win my freestyle runs, I get on top of my truck and do pushups and girls go absolutely nuts. I do it solely for them.

Right before you walk into the cage, you have to know your opponent and you honestly don’t know if you’re about to get your butt whipped or if you’re going to whip somebody’s butt and that’s like going into motorsports. Driving these 12,000-pound trucks, you don’t ever know what’s going to happen. You don’t know if you’re going to have an insane crash or if you’ll do something amazing. The nerves are always there, and you just have to work through it. You might be a little punch drunk at the end of it but it’s awesome. I’ve been hyper competitive all my life and my life would be pretty boring if it were any other way.

How Kayla Blood Got In Monster Jam Shape

When it comes to motorsports, safety is No.1. Whenever it comes to your body, that’s number one. Some drivers in motorsports don’t really believe in working out, but it only makes you stronger in being able to sustain the hits and blows. For me, I recently started doing individualized nutrition where I make sure I have my vitamins and supplements. You want to put back into your body what it’s not making anymore. If you’re not taking care of your body, it’s going to be harder to come back from injuries. Working out also helps mentally because whenever you’re mentally strong, you’re confident because you’ve done the work and you’re at the level you need to be at.

I like to run because I am a runner. If I do make it out to a track, I’ll do some 400s and I’ll sprint some 100s. I like long distance running as well, so I’ll do that. In being completely honest, I’ve never really worked out a lot in the gym to where I felt confident enough to walk in there and know what I needed to do. I do have a friend that I will go with that will help walk me through some workouts. I like to focus more on my lower body and abs because you need your legs to push the gas. Being strapped into the truck for some time, you can also start to feel that. I just try to be ready to go for anything. It’s kind of easier to get to the gym when I’m on the road because of all the things I’m juggling at home. I like when I get to the event on Thursday because I’m able to go to the gym and I have everything I need is right there.

Obviously, the kiddo is my first priority. Anytime that I’m home, I try and give him all the attention he needs. We have a really close family, and we do motocross and a lot of activities together. It’s a day-by-day thing. Whenever he’s in school, I’m up in the morning, taking him to school and going straight to work. Maybe sometimes I’ll get to workout and after that, it’s football practice and coming home to repeat it the next day. It’s something you get used to and it becomes your routine. I would say don’t think too much about it and just know what the important things in your life. If my family is taken care of, everything else kind of falls into place.