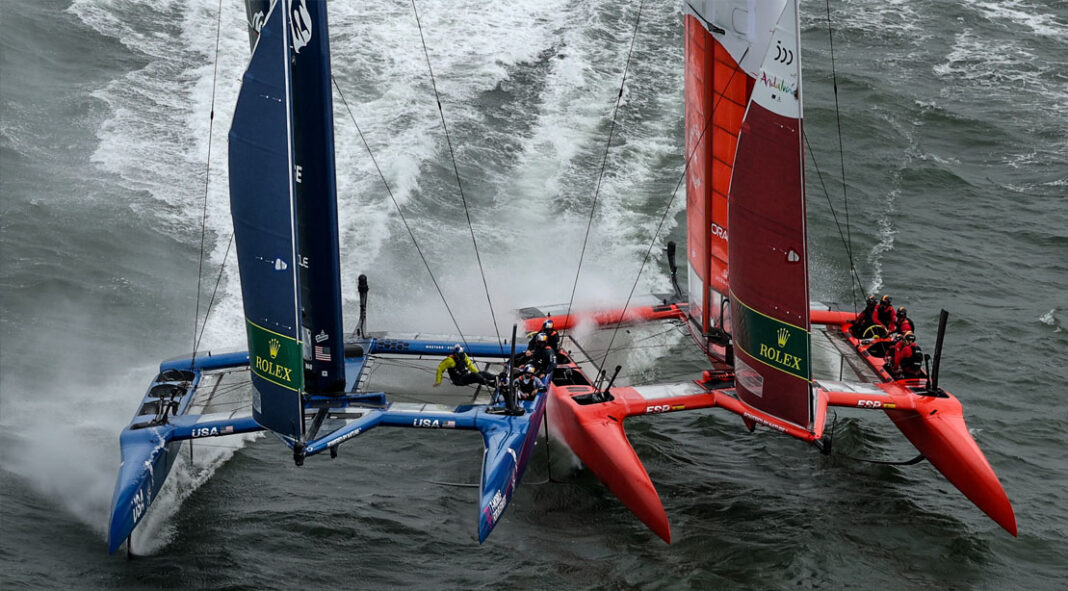 Jimmy Spithill won his first sailing race at the age of 10. In the three decades that have passed from that moment, he’s collected various other wins and is one of the world’s most decorated sailors. Now, the Australian is looking to add to his stellar resume as the skipper of the United States SailGP Team.

Now in its third season, the racing league includes 10 national teams from around the world and is considered to be F1 on water. Teams race aboard a 50-foot-long hydrofoiling sailing catamarans that are engineered for intense racing and can reach up to 60.

Jimmy Spithill joined the US team during the second season and helped lead the crew within grasp of the grand prize after they had finished last the previous season. It was a great step for the new crew, but the veteran knows it will take a lot more work if they are to continue to challenge the Australian team, who Spithill considers the benchmark in the league and winners of last season.

Muscle and Fitness spoke with Jimmy Spithill on how the sport of sailing has changed and what it takes to have success on the F50 foiling catamarans.

Jimmy Spithill Is Not Your Grandfather’s Sailing League

I think when people originally think of sailing, they probably think of jumping on a crushing yacht, grabbing a gin and tonic, and leaning back in a chair. It’s quite a different thing now with the physical demands, the decision-making, how quickly they must be made and the consequences when you get it wrong with just how serious it can be.

The stuff we go through now is exactly what motorsports goes through in terms of safety and collisions, the gear that guys wear and the training you have to go through. The key part today is you can’t leave any stone unturned. You’re looking for any competitive edge you can get. When you look at all the individual guys on the teams, they’re all great athletes and all have an array of skills. Ultimately, when you look at this style of racing, you just want to be as consistent as you can. You can’t race at this high a level with the data that’s available and everyone being on the same kind of boat and not have mistakes. You really have to try and average it out. You have to be consistent, and if you can get into the podium race, then you sort of go all out. It’s definitely a taxing environment.

When I started, there was no foiling — certainly in terms of technology. The tools you had for analyzing and debriefing were sort of rudimentary. Now, when you look at the boats, they can go four times the speed of the wind and they literally fly above the water. While it’s a good problem to have, you also have so much data that there’s too much. Part of the art is really focusing on the right areas to extract the key information. The other big change in my career is the fact that you can now have the best guys in the world on the same equipment, but you can see everyone’s data, and they can see ours. We’re all mic’d live during the race, there’s cameras strapped onto the boat and there is no hiding. It’s a fascinating thing because what it’s producing is very good racing. It’s an amazing thing to be a part of. With all of that, you push each other so hard that the learning and the level that you get to is definitely the highest I’ve seen.

Jimmy Spithill Gets Uncomfortable During Training

Everyone sort of trains a bit differently depending on their roles on the boat. For me personally, what I like to do training-wise are things that push me a little bit to exhaustion or put me under pressure and then I have to make a decision. I’ve always enjoyed a range of things that get me uncomfortable and places me in a stressful situation.

I still do a lot of boxing for that reason because of the hand-eye coordination. I don’t do any sparring anymore but a lot of the pads and getting to that point of exhaustion is what I focus on just to stay sharp because ultimately, out on the racetrack, there’s going to be a bunch of times when you’re going to be stressed and you have to make split-second decisions and you have to do it collectively. The more you can put yourself in a situation where you have to make decisions when you’re stressed and exhausted in your training, that’s a good way to be prepared when the moments come.

I’ve definitely tried different things. You have to have variety and try new things. To grow, you have to be open-minded. At the same time, one of the great things about technology is that there is always something new or different. For instance, we’re pretty fortunate on the U.S. team where we have Red Bull as one of our sponsors. They have a huge high-performance department that’s a part of their company. When you look at the stable of athletes they have in all different sports, the ability to connect with the other athletes on the roster, the ability to spend time with the high-performance teams, the mental side of understanding how the brain works, especially when you make mistakes — it’s remarkable. The key thing really is the culture within the team. You really have to have a culture where everyone is really willing to drop their guard and put their ego aside and ask the questions of what can I do better and what’s going to help the team? That’s something we’ve worked pretty hard at with the U.S. team.

I’m into my early 40s now, and when you’re younger, you can pretty much go full throttle all the time and you don’t have to worry too much about what you’re putting into your body. Back in 2013, I was starting to get a lot of injuries and I was doing a lot of different sports. I was doing CrossFit competitions, boxing, paddleboard racing and long-distance stuff. A surgeon friend of mine advised me to get some tests. I went and got a bunch of tests to try and understand what my body was reacting to. I found out a lot of things my body wasn’t tolerant to. It was never really enough to stop me, but they were things that just didn’t sit too well with me. One thing was sugar and the others were dairy, gluten and whey protein. At the time, it was bred into me that after a tough training session, the best thing for recovery was a whey protein shake. For me, that was probably the worst thing you could do because a lot of these things were leading to inflammation in my body that was hurting my recovery and sleep. If you put s***ty petrol into a car, it’s not going to run that well. Once I cut those out, the gains were amazing and just what I was able to do with that change of diet.

A Good Night’s Sleep Is Hard to Come By

It’s definitely a battle and I do a lot of traveling. I’m racing and working in different parts of the world. I’ll be in Australia, then back in California, then Europe and we have a global circuit. All of the teams experience coming into a venue that could be after a long flight and they’re only there for four days, and they have to perform and get out. Without a doubt, the sleep cycle is a battle but as you learn and understand some of these hacks that work well, it all adds up. It reminds me of when you’re training for a sport and you’re trying to add all the little things up. It can be quite a big difference on the racetrack and the same with your sleep and recovery program. All of those little things, the diet, recovery, stretching and getting in the sauna and ice baths, it all goes into performance. The better recovered you are, the better decisions you’re going to make and you’re able to process things at a much quicker rate. One of the enjoyments for me is that what we’re doing is really tough. Everyone has the same challenges and that’s what makes winning so rewarding. You’re all pushing one another and you’re also growing as you go through it.

Not Much Time To Practice

With SailGP, I guess it’s a little bit like Formula 1 where there’s a real restriction on training. The boats basically come in, you get two training days, you race them on the weekends and then they’re packed up. So like Formula 1, if the boats aren’t racing, they’re onto the next venue. That in itself makes it challenging for a new team, which we are. A few of us have never raced together and you’re going against teams that have years of time sailing together as a unit. I think we have a fantastic group. The Australians are probably the best example because they’ve spent the most amount of time racing and sailing together over the years. But, with the right approach, work ethic, support, staff, and coaching and really going through the data, you can really make good gains. That’s certainly what we’re going to focus on for this season.

What is Google Analytics 4?