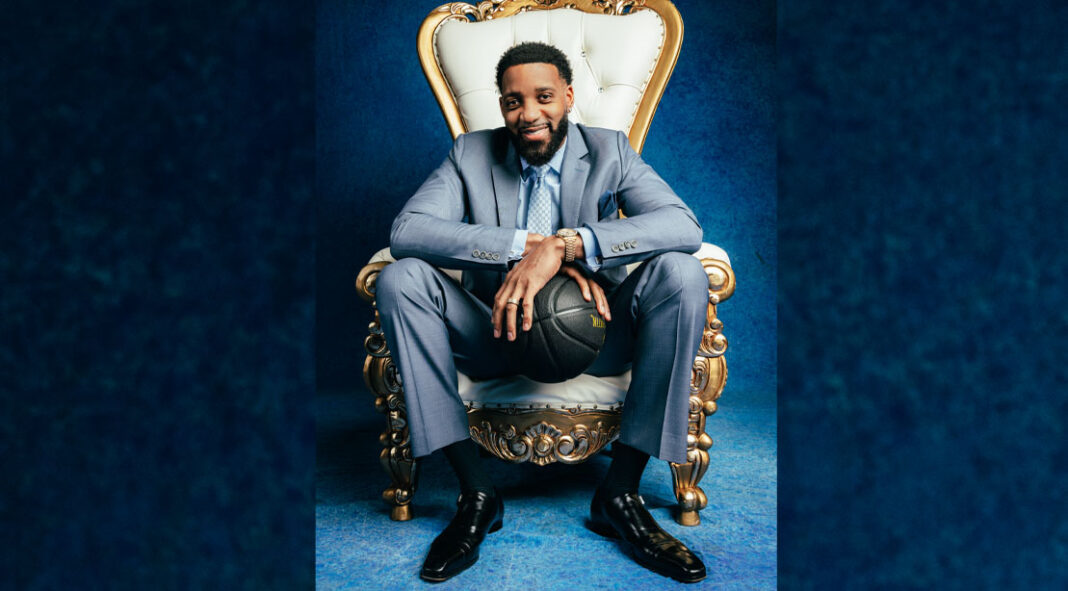 These days, Tracy McGrady enjoys his basketball from the sidelines. Now north of age 40, the NBA legend leaves the highlight-reel jams to a new generation of high-flying one-on-one players participating in his breakthrough basketball startup, the Ones Basketball League.

Other than the occasional informal shootaround with his sons and their AAU teams, T-Mac says he rarely picks up a basketball. But by looking at his still-lean 6’8″ frame, if it came to a one-on-one matchup, the seven-time NBA All-Star still gives off the vibe of being be unstoppable anywhere on the court. And to an extent, McGrady agrees with that assessment.

“Obviously I’m not as quick and fast as I was,” McGrady says. “I can’t blow by you or elevate over you anymore, but I can still create space and get my shot off, and there’s nothing you could do about it.”

He’s not boasting, despite more than a decade since his injury-plagued NBA career came to a close. McGrady says he’s now as close to game shape today as he was when he had back-to-back NBA scoring titles in 2003 and 2004.

He attributes his physical resurgence to a unique workout routine: Burpees, that universally dreaded conditioning exercise in which you go from standing to squatting, kicking back your legs to a plank then popping back up to a standing position. He does that over and over. But the results speak for themselves as he remains close to his NBA weight.

“After I retired, I was just trying out different workouts to see what gets me to actually want to go to the gym and work out,” he says. “Now I found something that I actually loved. It was challenging at first, but I love it because it keeps me lean. And I love how my body feels.”

McGrady isn’t working toward a comeback, instead he’s quite enthusiastic in his role as creator of the OBL, which concludes a successful inaugural season this Friday and Saturday, July 15-16, with the league’s $250,000 grand prize in the OBL Finals in Henderson, NV. McGrady’s vision of an elite one-on-one league was quickly bolstered by a television deal with Showtime Networks.

“There’s a lot of untapped talent out here,” McGrady says. “And as a basketball fan and a non-basketball fan, I could find that talent to put on a platform on one on one platform to where we actually be entertaining watching this.”

What It Takes To Rule The OBL Court

If Tracy McGrady were to compete, he says the scouting report would look a bit like this: “Today, anybody can lock me up,” McGrady says, “but for prime T-Mac, the report would probably say it’s best to make me go right. As a right-handed player, most of us like to drive left because we’re much stronger and more comfortable. We’re more comfortable going left for dribble pull ups, or finishing with the left hand … I became so strong going to my left that I wasn’t as good going to my right. That would be my scouting report, I could admit that now.” [laughs]

In the OBL, seven points wins a game and there’s a reason, McGrady says: entertainment value “If you play to 11 or 15, that’s not a product you’re gonna want to watch, especially in one on one. It’s gonna get sloppy. Players are gonna get tired and settle for jump shots. And that’s not gonna be a good look.”

What does it take to win the OBL grand prize? According to Tracy McGrady, the ninth overall pick by the Toronto Raptors in the 1997 NBA Draft, the athlete has to be “wired a bit differently.” You’re on your own, no teammates to back you up, so you need to be more rounded than you would think. You need a list of skills, from shooting ability, ball handling and footwork as well as play defense.

The prototypical player, he says, would resemble NBA all-star Kyrie Irving. “Everybody knows that,” he says. “If you watch the NBA, you know that Kyrie is a problem — In one on one, his skill set is unmatched.”

For the Love of Burpees

These days, Tracy McGrady says he carries around 238 pounds these days, about eight pounds more than his playing days in the NBA. He doesn’t adhere to any strict diet, having the occasional back to back burger or pizza days. At his Houston home, McGrady has a fully equipped gym to go along with a full-size basketball court. He uses neither, instead allowing his kids’ AAU teams to utilize the space.

His attributes his post-basketball physical transformation to nothing but burpees. It’s all he does and although he says he admits the unique workout program may not be for everyone, 15 to 20 minutes a day is all it takes he says for him to keep the weight off. Best of all, on top of being in solid shape, his minimal workout regimen has helped eliminate some of the injuries that plagued him throughout his career.

“I’ve realized that it’s actually helped strengthen my back,” McGrady says. “You know, I’ve had back pains my whole career, and had surgery right after I retired. I still had some lingering pain, but I’ve noticed ever sense doing these, that my back is stronger. I don’t have that pain with certain movements. My legs have gotten stronger.

He’s tried different splits, four sets of a minute each is one routine, in which he says he can get anywhere from 15 to 18 reps per minute. Other times, he’ll perform burpee ladder style, starting with 10 burpees, then nine, all the way to one and back to 10. Some of the AAU dads begin noticing his burpee workouts, most refused to join in on the workouts, even with an NBA legend.

“Some of then see me doing burpees and are like, I hate doing these, bro,’” he says. “Well I hated them too. But I got to the point in which I loved how they made me feel and how I looked in the mnirror. I love what I see.”

His advice. Give it a shot: “It’s a mental thing. If you could get past your hatred of them and just try it out and see what results you can get. From a mental aspect, it may change your mind and you’ll fall in love with them.”

Another T-Mac tip: Start slow and build consistently. “Start out doing a set of five burpees, then do probably like four or five sets or something like that just to see how you feel. And then just gradually ramp it up until you get to doing 10 burpees. It’s a progress of getting to that point where you actually love doing them.”

Tracy McGrady and a League for the Newest Generation

Tracy McGrady calls the inaugural season of the OBL a major success. His vision evolved from the infinite barbershop and barroom battles of who is the best one on one. Would it be Jordan? Kobe? KD? Lebron? Even McGrady’s name pops up in the conversation as best ever. The idea finally came to fruition when the league launched in February and now wrapping up with this weekend’s final.

Another inspiration for the league was the lack of interest his sons, Layden and Laymen, found by watching a full 48 minutes of NBA play. Now as a father, McGrady understands this, even if his kids may yawn at some of his most memorable performances, such as his 62-point performance in 2004 with the Orlando Magic or the following season with the Houston Rockets in which he scored 13 points in 33 seconds. And he’s OK with that.

“I worked at ESPN for four and a half years, and part of the job was going to the NBA Finals,” he says. “This was when Steph Curry and LeBron James, and Klay Thompson were going at it. My sons love basketball, but they didn’t ask me one time could they go to the finals with me. Since the OBL started, they haven’t missed a game.”

McGrady says the OBL’s model of fast-paced and non-stop action keep the games moving quickly. and keep the excitement levels at a maximum.

“These days it’s all short content,” McGrady says. “So I understand that they don’t have the tolerance to sit down for two and a half hours to watch it live. I get that. It’s just a different day and age just like when I played in NBA, it is not the same as it is right now. Things have changed. It’s about finding what works for younger kids, what they what resonates with them.”

McGrady now swaggers at the bright future he expects from the OBL in Year 2 and beyond. He expects expansion of the league in the near future, hopefully on an international level and beyond.

“We’re gonna make history — the OBL is going to be here for a long time,” McGrady says. It’s going to be a staple in sports. And five years I’m looking for OBL to be a running on a global level. Hopefully we could one day put together the OBL Olympics.”