How Brandi Rhodes Stays Fit Through Motherhood, Business, and Wrestling 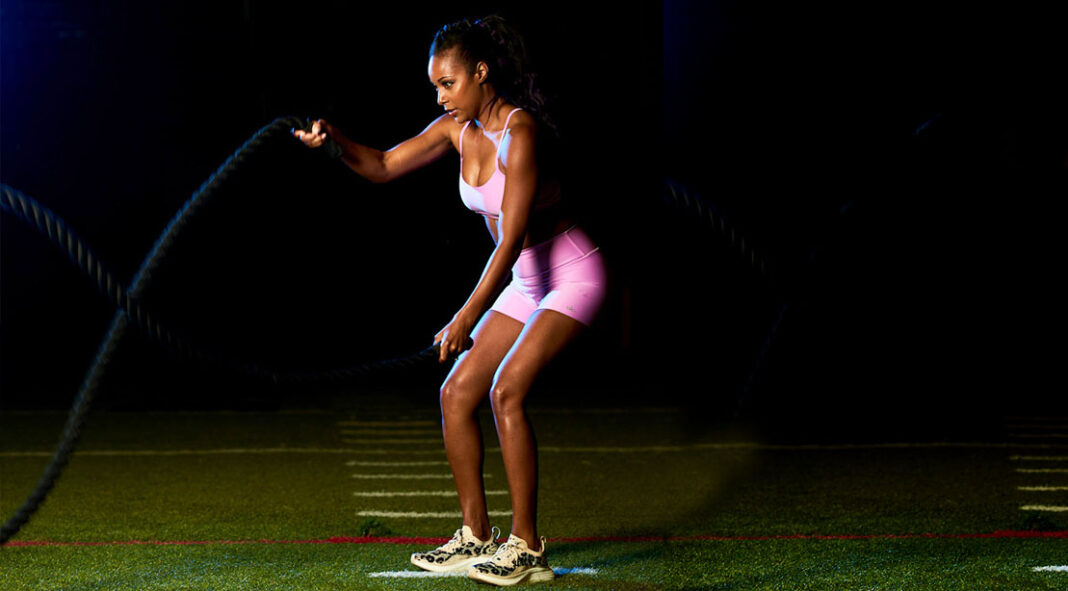 Brandi Rhodes is loving life as a mom and believes that maintaining her own health is one of the most important things that she can do for baby Liberty. With that in mind, the business woman, wrestler, and television personality has really got her sweat on during the last year to look and feel phenomenal, at a time when life has never been busier.

The day of a pro wrestling family is never dull. As “Muscle & Fitness HERS” talks exclusively to Brandi Rhodes, we are just 24 hours removed from her husband Cody’s headline grabbing match at WWE’s Hell in a Cell pay-per-view, where the “American Nightmare” toughed it out to wrestle the match of his career while suffering from a visibly torn pectoral muscle. Pro wrestlers may look like superheroes in the ring, but they bend and break like the rest of us. So, did Cody get a ticking off when he called home after giving so much of himself physically to please the fans? “No, because the reason that wrestlers marry wrestlers is because we get it,” says Rhodes. “We understand, you know? So, I think I’m probably the only person that he’s comfortable talking to during these incidents because, as much as it’s hard to watch him being in pain and working through pain, I understand it, I’ve done it, and I get it. So, as long as we have the all-clear from doctor’s I’m fully supporting him.”

Brandi Rhodes is competitive at heart

Brandi Rhodes understands what it’s like to work through pain herself because even before making her pro wrestling debut in 2011, she had already competed in figure skating from a young age. “It’s one of those sports that, because it’s so aesthetically pleasing, people don’t realize the endurance that you need to have, to do it,” she says. “I mean, I started figure skating when I was 4-years-old and I didn’t stop until I was 27 years old so, I had a very long career. A lot of your career is spent falling very hard. It’s that unforgiving ice. I was very bruised up all of the time. My ankle bones tell the story. I used to have to wrap my ankles every single time that I practiced, because they would bleed just from the roughness of the leather of the boot.”

While Brandi exited WWE with Cody in 2016, her passion for pro wrestling remained and she became a Chief Brand Ambassador and performer for All Elite Wrestling, joining the upstart promotion with Cody from 2019-2022. And, with Cody now back in WWE, one shouldn’t discount the possibility of Brandi lacing up the boots once again. We found out that she is a regular at their “Nightmare Factory” wrestling school in Atlanta, GA and that once our interview is concluded, she will be headed inside the ring to train for a couple of hours. “I’m still training all of the time,” she shares. “People can connect the dots and make of that what they will. I will tell you; I wouldn’t be training and getting beat up (laughs) just for the hell of it, so obviously I do plan to continue my in-ring career. When and where? That is yet to be seen but I hope when it does happen, everybody is happy and proud.”

Of course, Rhodes already has her hands full outside of the ring. Not only is she the proud mom of Liberty, who recently celebrated her first birthday, but she’s also just learned that her popular YouTube cooking show, “Shot of Brandi” is being developed for television. For this renaissance woman, being fit and healthy is essential for staying driven and chasing her ambitions. “For me, I’ve always been very, very health focussed and had a health agenda,” she says. “And I hope that is something that rubs off on my child, and that she is able to do the things that she wants to do.” Rhodes points out that all mom’s are different and that one size does not fit all as relates to getting back into shape post pregnancy. However, in her case the results of her hard work are really paying off.

“One of the things that I am very open to is evolving my fitness routines,” says Rhodes. “I know that sometimes we get really comfortable with certain routines and we kinda just get stuck in them, and we don’t know how to move forward.” In order to shake things up, Rhodes began working with personal trainer Brad Kolowich and feels that this change of routine, coupled with her in-ring sessions at the Nightmare Factory, have really moved the needle. In fact, Rhodes has lost 52 pounds in total, that is 2 pounds less than her pre-pregnancy weight.

Rhodes works with Kolowich 2-3 times per week. The sessions are usually full-body workouts with a weightlifting component. She compliments these sessions by fitting in her own workouts too, and these are powered by the Sweat app. “It’s female focussed, all female trainers, and it gives me different workouts every day,” says Rhodes, explaining that some days may be cardio based, while others are full-body Tabata (a style of high intensity internal training). “Other days are just arms, or just abs,” she continues.

Brandi gets stronger by working on her weaknesses

One of the briefs that Rhode’s gave to Brad Kolowich right from the very beginning was that she felt the need to improve on her strength. “When I do step back in the ring, one of my, I guess, weaknesses for me is that I haven’t been the strongest,” she shares. “I’ve always been ok with the fact that my upper-body strength wasn’t optimal, and I’m just not ok with that anymore.” Thanks to regular weight lifting, Rhodes is now crushing PR after PR. “We are doing bench, we’re doing dips which I hate (laughs), we are doing pullups. I don’t think I’ve done pullups since elementary school,” says Rhodes.

Not neglecting the legs, the fit momma is also regularly squatting and executing leg presses. Plus, she is focussed on working her calves. “I’ve got the skinniest calves of anybody I’ve ever met,” she jokes. “I think it’s just a genetic thing, but maybe we can get a little more meat there!”

Rhodes is at her best when she is busy. “I’ve been that way since I was a kid,” she says. “I’ve always wanted to have so much going on. I just work better, and function better when I’m really stimulated.” Case in point: the mammoth multitasker is now working on a second

YouTube series called “Brandi on the Rocks,” a cool concept that sees her visiting café’s and bars to learn more about their signature cocktails. Cheers to you, Brandi!

Yes This Is A Normal Size Bike! #shorts

Best triathlon saddles 2022 – Comfort and power in the aero position