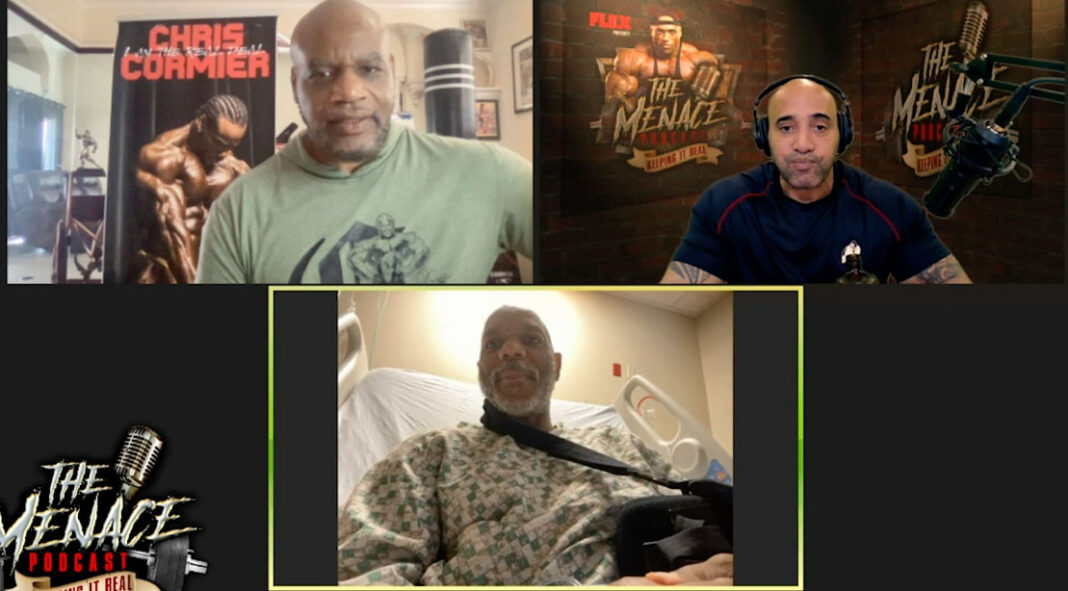 Dennis James has been hosting a series of roundtable discussions on recent episodes of The Menace Podcast. One such episode not only featured Chris “The Real Deal” Cormier, and Milos Sarcev, but they were also joined by the legendary four-time Arnold Classic Champion, Flex Wheeler. Wheeler actually joined the online video chat from a hospital bed, where he shared an update on his current health. Wheeler had originally went in for shoulder surgery, but he is still in the hospital over two weeks later as of the recording of the episode.

“{The doctor] said ‘when I went in there, it looked like a bomb went off,’” the bodybuilding legend said. “So, the one-hour surgery turned into four hours.”

Wheeler went on to say that they kept him in the hospital because of the pain from the surgery, but he would also suffer a GI infection. He was also struggling with dehydration, which was very concerning as a kidney transplant patient. The problems associated with that has ultimately kept Wheeler in the hospital.

“I’m still having a GI problem, but right now it’s the kidney problem because it’s really unstable,” he reported. Kidney transplants that last seven years or longer are considered successful. Wheeler’s transplant has supported him for almost 20 years. That combined with a recent Instagram post led many fans to speculate about Wheeler’s well-being, but he shared that after all the issues he’s faced over the years, including the amputation of his lower leg, Covid, and more, he’s still fighting and remains optimistic.

“That’s my job now, to be a beacon of light in some of the worst, darkest times because all of us, like you said, Dennis, are going through horrible times – some worse than others. So, my strength draws from that because I know I was prepared for something bigger than that.”

To watch the full episode, as well as all episodes of The Menace Podcast, subscribe to the Muscle & Fitness YouTube channel.

LONELINESS & HOW TO COPE DURING THE HOLIDAY SEASON, with Dr. Nachi Sinha