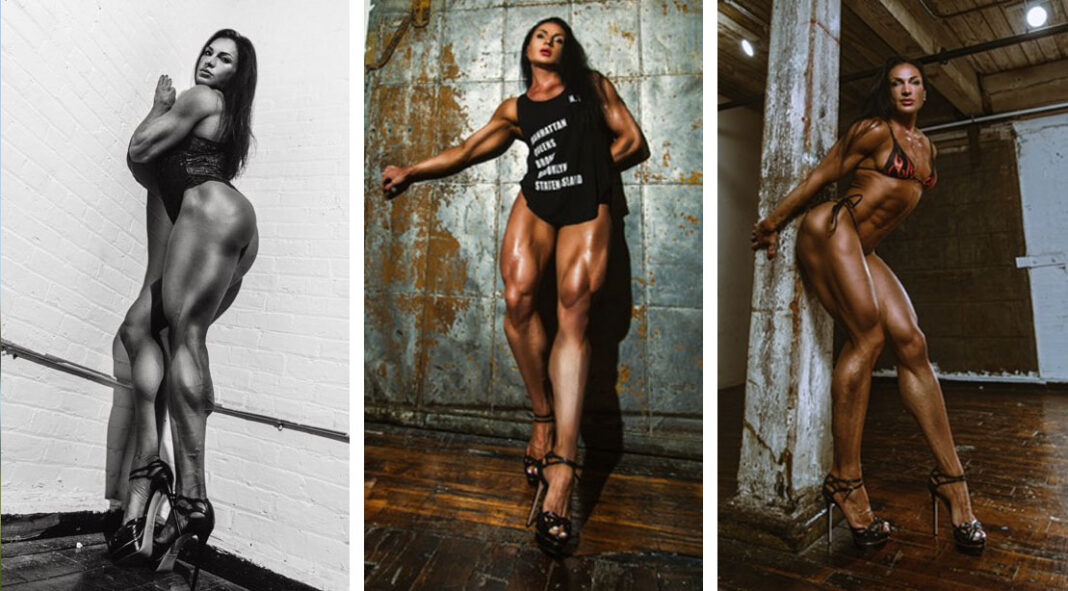 Every IFBB Pro League athlete will tell you that it’s a privilege to be able to stand onstage at a contest and showcase the months of hard work they have invested in developing their physiques. The average time that goes into a contest prep is three months – all for three minutes of glory in front of the fans and judges. Whether they win or lose, they then walk offstage and start the process over again, or they try to take advantage of other opportunities that are ahead. Diana Schnaidt is one of these pros.

Schnaidt has been competing as a pro since 2014. She originally started in the Figure division, but had since moved to the Women’s Physique division. She considers the contests she enters the highlights of her year.

“It’s something else. The feeling is something between a heart attack and extreme happiness,” she said. “Every time I get up there, I feel like I’m getting ready to fly.” Continued Gains with Pain

At the beginning of 2022, Schnaidt had a plan for where she was going to compete during the season, and she hoped that this would be the year that she finally moves on to the Olympia. However, the year didn’t start out on the right foot to say the least.

“I’m not sure what happened, but back in January, I started feeling pain in my left foot,” said Schnaidt. “For around a month, I was limping, and I realized it wasn’t getting any better.”

Schnaidt went to the doctor, and an X-ray determined she had broken a bone in her foot. She was given a boot to wear for five weeks, and the doctor advised her not to train during that time so it can heal. However, Schnaidt knew her contest season was approaching, and she wanted to present the best physique possible. So, she continued to train legs, including doing lunges and squats. (It’s worth noting that Schnaidt can squat up to 395 pounds for reps.)

“A few days, I would wear the boot, then a few days, I’d do whatever,” she admitted. As a result, she suffered another broken bone in the foot, and the doctor ordered her to wear the boot for another five weeks. This time, she listened, and one of the bones healed. Unfortunately, the other one had not.

Now Schnaidt had a decision to make. She had already missed the New York Pro and Toronto Pro contests, which she wanted to compete in. The Chicago Pro, one of Schnaidt’s favorite contests to compete in, is set to take place on the weekend of July 22-23. Schnaidt had wanted to win this contest specifically for several years, and it comes with an Olympia qualification as well.

“That would mean the world to me. That would be my dream coming true.”

More Stress, This Time from Several Continents Away

That dream is what has propelled her throughout the year so far. While she had to struggle with the physical toll of the injury, the Ukranian athlete that now calls New York home was faced with more adversity – the Ukraine/Russia crisis that started in early 2022. Diana Schnaidt has family in both Ukraine and Russia, and they are torn over the war. Several family members, including her parents, sister, her sister’s husband, and her nephew are all in Ukraine trying to stay safe as the fight continues for her homeland. She reported that at this time, they are unable to leave Ukraine for another country.

“I’ve been trying to talk to them every day to see how they are doing,” she explained. “They are all very tired and exhausted. Unfortunately, things are not getting better over there.”

Meanwhile, her aunt and other relatives are in Russia, and they are seeing news and updates that are being broadcasted in that country. Because of that, they have a completely different perspective.

“In their opinions, the Russians are saving the people in Ukraine from something that is nonexistent. So there has been arguing between them. Because of all of it, it has drained me mentally, physically, emotionally,” Schnaidt stated. Needing a way to keep her mind off of the war and the family feud that had started as a result, Schnaidt decided to focus on prep and will compete in Chicago.

“Now, I feel like my body’s ready, I’m ready,” she said. While the struggle to train with her injuries continue, she feels that training has served a much higher purpose for her.

“Going to the gym has been my therapy. Weight training has been working as therapy for me. It puts my mind in a better place.”

She reported that her upper body training never changed in spite of the injury, and even though she can’t squat or do lunges, she has found ways to train her legs with cable and machine work. Regardless of how she has to train, nothing is keeping her from being onstage for this show. She’s competed in the Chicago Pro every year since 2016. Her best finish came in 2017 when she placed second to Autumn Swansen. Part of the reason she is going all in is the contest itself.

“I just love that show. It’s one of the largest of the season, and you see all of those great athletes on that stage.”

One reason she likes it so much is because of how promoter Tim Gardner takes care of the athletes and runs the show itself.

“Tim Gardner shows, Wings of Strength shows, they definitely treat all the athletes very well. That’s why this one and the Tampa Pro are two of my favorite shows.” said the eighth-year competitor. What stands out the most to Diana Schnaidt is that she gets to test herself against a lineup of great competitors.

“Some athletes choose to do smaller shows so they can win, but if fewer competitors show up, it’s not a real competition,” she explained. “Of course, everybody wants to win, but when you compete against strong athletes, you feel like you’re really competing.”

She will get her wish when she graces the stage in Illinois. Fourteen Women’s Physique athletes from nine states and one competitor from China will pose side by side with Schnaidt while having the same goal she does – winning and moving on to the Olympia. In her eyes, that would be a result of personal and international magnitude.

“It would make me very, very happy and proud. I would feel like I not only won for myself, but I won for Ukraine and my family who is there.”