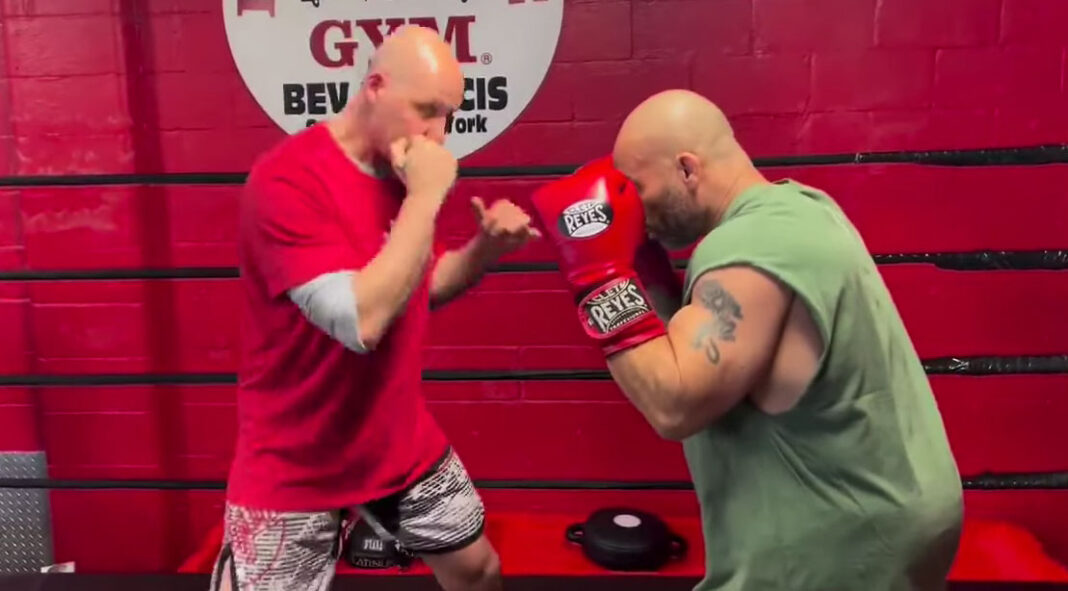 Combat sports isn’t all about offense. Defense is just as important, if not more so. Three-time world kickboxing champion Derek Panza knows all about this, which is why he shared time to demonstrate the “block and counter” technique in a recent video on the Muscle & Fitness YouTube channel. His partner for this demonstration was IFBB Pro League bodybuilder Marco Rivera, who also was a pro boxer in his athletic career.

“The theme is the same with every type of counter-strike technique. It must be instantaneous,” explained the trainer. “Too many people block, then counter. It takes too long.”

Panza shared that the two movements have to be almost simultaneous, almost as if both actions are one movement.

If I’m going with my left hook, I’m aiming right for Marco’s neck and jaw, he’s going to block instantaneous. The moment he feels my knuckles just touching his glove, he has to start firing back his left hook,” Panza shared. He went on to share what would happen if Rivera was not able to react properly.

“If he waits, pauses, then tries to fire his left hook, I’ll probably already get my right hand off before that.”

A combat athlete can’t think about a single punch or strike. They must be prepared for several of them at once. Combinations are used often in fights. Panza explained that fighters are programmed to perform combinations. This is why a technique like block and counter can be even more important. Blocking the first punch can possibly allow him to react and begin his own combination, which could be a turning point in the match. Panza even shares that subtle movements can be a big difference.

“Marco was dipping his right shoulder and his right hip,” Panza pointed out. “It actually helps him absorb the impact. His legs and body act like shocks on a car. Then it coils his left shoulder back, just to drop. So now, the power for his punch comes from the hip, his shoulder coiled back, and his thigh. All these big muscles, we’re actually using now.”

The two athletes go on to demonstrate the block and counter as well as other tips to maximize the effectiveness of the punch that the blocking competitor would come back with. To learn more of Panza’s tips and techniques, subscribe to the M&F YouTube channel.

As consumers spend more on gas and food, a shadow looms over retail

Tina Knowles Writes About Renaissance and Her Nephew, Johnny