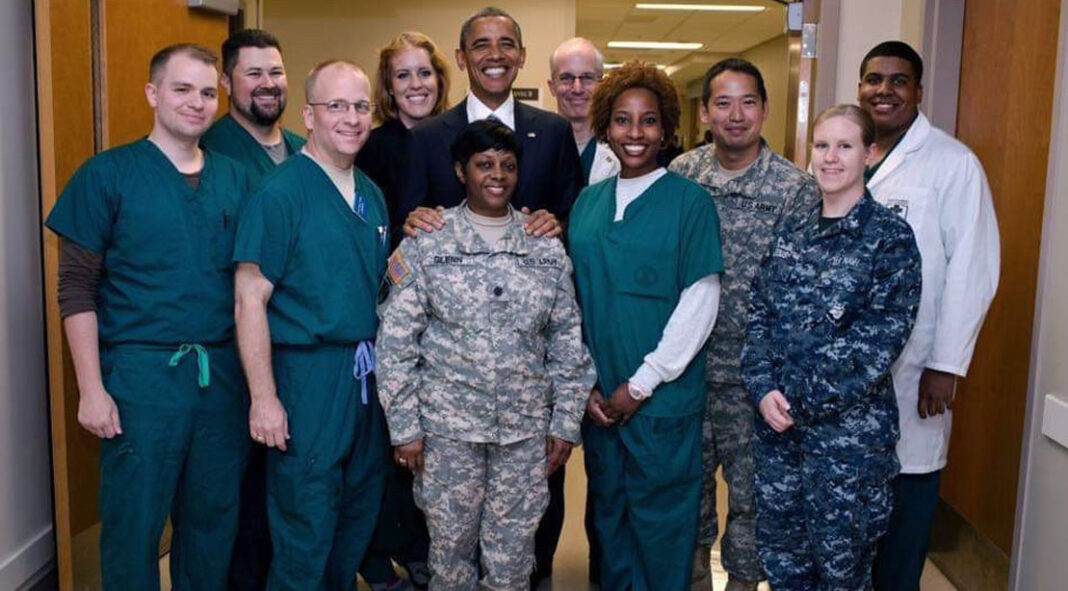 Many people that are into fitness want to do more than improve their bodies. They use their efforts from the workouts to focus on and improve mental health as well. Cherissa Jackson is the American Veterans Chief Medical Executive as well as the founder of Project Give Hope, and she understands that one coincides with the other. Jackson feels that working on physical health will help one’s mental health, and vice versa.

Veterans across America deal with various mental and physical issues that require medical attention. Jackson works to provide those veterans with the advocacy and guidance they need to H.E.A.L. That stands for Healthcare, Evaluation, Advocacy, and Legislation. This is more than a job for Jackson, it’s a calling.

“I tell people all the time that this is definitely my God-given purpose for my life. I believe running the HEAL program for AMVETS is truly my purpose.”

Not only does Jackson work with veterans, she is one herself. The native of Allendale, South Carolina joined the United States Air Force and served 23.5 years and 14 days. Captain Jackson explained that she followed in the footsteps of her brother, who served in the Navy. She felt it would benefit her parents, who raised six children in all.

“I saw the hardships that my parents went through while trying to put my siblings through college. So, I didn’t want to burden them by putting me through school.”

Jackson’s athletic background, including long distance in track, shot put, hurdles, and cheerleading made basic training much easier for her than those who may not have been as fit. During her military career, she would be deployed three times – twice to Iraq and once to Afghanistan. She had a near death experience while in Afghanistan, and she encountered a lot that took a toll on her mentally.

“There were things I saw in Afghanistan in terms of injuries, multiple amputations, burns, agony that I saw people suffer through their service, and of course, I saw death,” Jackson shared. “I saw more death than anyone should have to see.”

Like many veterans, Cherissa Jackson is a survivor of Post-Traumatic Stress Disorder (PTSD) because of what she saw and went through during her deployments. Fortunately for her, she was able to focus on fitness to help her become a survivor and move forward with the duration of her past career as well as the one she is in today.

“Fitness has always been an escape for me. It has always been a way for me to quiet my mind. I focus on weight training, running, etc. I don’t think about what is going on in the world around me.” Jackson went on to say that training has been a positive source for her physical and mental well-being through numerous times in her life.

“When I was going through a tumultuous divorce, it was working out that saved my mental health. In my 50 years on this earth, I can pinpoint every situation where fitness and wellness were the catalysts that got me out of the dark places.”

Jackson has heard numerous stories from veterans that also resulted in PTSD diagnoses. One would imagine that being in a position such as hers would possibly have a negative impact on her mindset. She said that isn’t necessarily the case.

“When I’m talking to a veteran, I’m so in that zone of helping them that I try not to bring my own personal experience into me helping them finding solutions,” Jackson explained. She also detailed how she is able to move on past any potential issues that may come up later on after her work is done.

“I immediately find somewhere for me to run or get on a bike and cycle. I have a Peloton at home so that I can use physical fitness to sweat out that stress or sweat out those agonies and images.”

Because of the benefits that Jackson has seen from focusing on fitness, she advocates for other veterans to do the same. She feels that some of the issues that they face could be helped by committing time for self-improvement in some physical form. If they already have experience working out, that helps her connect with them even more.

“We get to relate on that level. I hear them say ‘yeah, I missed a workout this week, and I wasn’t feeling my best,’ I’m like ‘working out is your being.’ It helps me to think like them and stick with their working out and their physical fitness, which can help with their PTSD as well,” she detailed. In many cases, the connection she is able to establish can be life saving.

“I talk to so many survivors of suicide and people call us for assistance. Hearing them talk about their kids and their families. That is something that they are hopeful for. When you can show them that life is worth living based on that little bit of hope they have, that gives them that spark and motivation to do better and be better,” said Jackson.

Whether it’s through her personal experience or her professional purpose, Captain Cherissa Jackson is an advocate for physical fitness because she wants to see veterans and other people find something that can give them hope for the future, just like she does every time she finishes the day’s workout and when she finishes a conversation with one of the veterans she helps.

“There is hope out here, and physical fitness plays a part in hope because it helps you know that life is worth living. Just getting out and moving, doing something can motivate a person to go out and find that hope in their lives. That’s what I’m all about.”