C-Bum Crossing Over To Mainstream Recognition 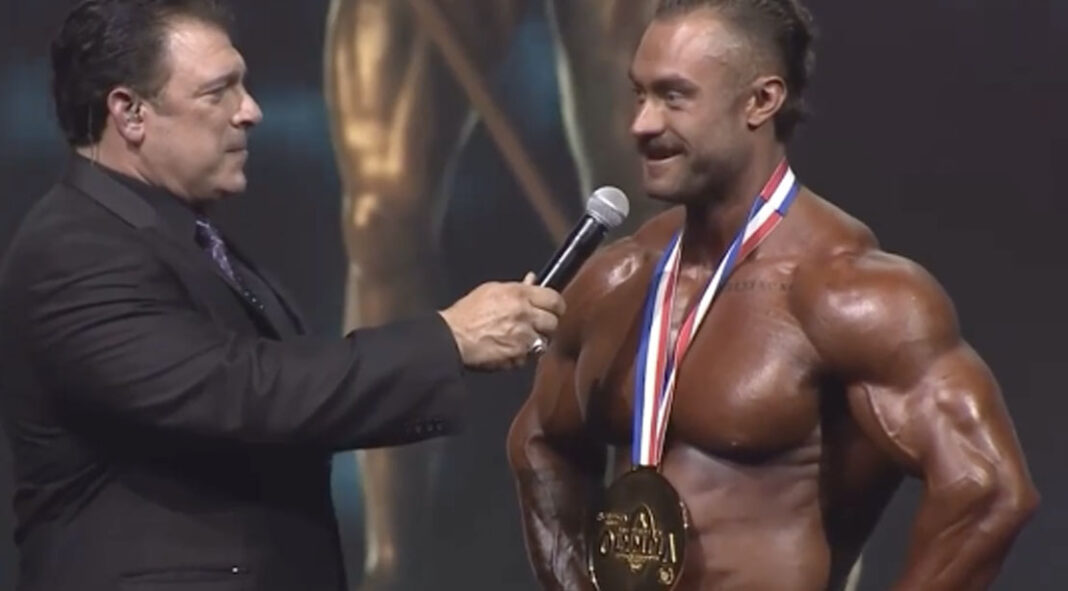 Three-time Classic Physique Olympia champion Chris Bumstead has been able to do what no other Mr. Olympia has done since seven-time Mr. O Arnold Schwarzenegger: break into the mainstream. As far as social media reach and popularity, Bumstead— or C-bum, as he’s affectionally known throughout the bodybuilding industry—and his 10.4 million followers on Instagram alone is more popular than the last three Mr. Olympias combined. The 27-year-old Canadian is 6’1” and tips the scales anywhere between 215 and 225 pounds. Though Bumstead has in the past credited Tom Platz—aka the king of quads—as an influence, the aesthetics and symmetry C-Bum displays onstage is often compared to legends like three-time Mr. O Frank Zane (1977-1979).

We spoke with C-bum amid his prep for his fourth consecutive Olympia Classic Physique title.

You are the most popular bodybuilder on the planet by every measurable metric. What’s driving this popularity?

[laughs] I get asked that question during every interview I do. But it’s a good one, because I don’t really know. Ask my mom and you’ll probably get an answer.

What do you think?

I think it’s because I’ve been authentic my whole career. My parents raised me that way. I’ve never tried to be someone I’m not. I’ve never tried to be the big, tough, intense, angry, bodybuilder that no one can relate…I’ve always been genuine and honest when I’m anxious, nervous, excited, and I share a lot of that through my prep on my YouTube and social media channels.

On top of that, [when I started competing] social media was starting to become the norm, and a lot of bodybuilders were very anti social media. Then there were the real competitors. The real competitors didn’t YouTube, or vlog, or take selfies. There was a stigma that bodybuilders—real bodybuilders—were too tough for that. And I wasn’t about that. What if I could bridge these two worlds together by entering a prep for the Olympia and recording every single workout, everything I eat, when I’m having good days, when I’m having bad days? What if I could just share the whole process. Maybe people would relate to that.

So why classic and not open?

I started in the open because there was no classic. I turned pro [in 2016] as an open bodybuilder. That year, classic came out. So I thought, this was great, I didn’t have to put on 40 pounds of muscle and build this physique that I don’t even know if I really want.

Do contemporary Mr. Olympia physiques appeal to you?

I wanted to look like Lee Labrada—but taller—Lee Haney a little bit, Berry de Mey was definitely one of my favorite physiques for a while. Those were the physiques I wanted to emulate rather than Phil Heath.

You’re the most popular bodybuilder, yet you don’t get the same money as the Mr. Olympia winner. Are you OK with that?

I’d be lying if I said I didn’t wish the prize money was more. I think some of my fellow competitors might have a qualm, but I really don’t care. Honestly, I’ve never competed for the money. At the end of the day, would I like to take home a bigger check? Of course, but is that going to change how hard I try to win? No.

Let’s put it another way: If you’re more popular than Big Ramy and draw more people to the sport, shouldn’t you be more important than he?

I guess it depends on how you define “important.” [Many people] would tell you Big Ramy is more important because he gets a bigger check at the end of the year. So it depends on how you value importance. Right now, I’m happy with where I’m at. I think I’ve earned a lot of respect from people in the industry and in the world and I think classic physique is a very young division. I believe this year the prize money is going up a good amount—not up to open, yet—but we’ve been around for only a few years. I think the popularity and the crowd it’s drawn speaks for itself. As does the amount of love, not only from me, but also the love my fellow competitors have for the division.

Is it also drawing the next generation of competitors?

Younger competitors all over the US and in Canada are choosing classic over the open. It’s exploding. I think over the years the prize money will continue to rise and maybe will match the open one day. When it happens it happens, I have no control over that. What is in my control is how much money I can make outside competing and I work my ass off for that, but I can’t go run and whine to whomever controls that and say I want more money.

How hard is the work outside of competing?

It’s a lot of effort, but at the end of the day, it’s not a particularly hard job. Maybe that’s just me being grateful for what I get to do, because I really do love what I do every day. How can you feel like you’re working very hard when you’re enjoying it all the time? I’ve built an amazing team around me that helps me with my brand. I have a videographer, a photographer, and a friend who’s also my business partner who helps me with my training app and our merch that we sell. We try to stay active in the community. It’s a lot of work, but it’s absolutely worth it. I much rather be doing this than sitting behind a desk, so I’d never complain.

What would be the first signal that would make you think it’s time to reconsider competing?

That’s a good question. The first thing would be my health. Because as much as I love bodybuilding and I get so much joy and fulfillment out of it, my health is my number one priority. If I retire without that, then what was the point? After that, it’s keeping the same fire lit. If I start to lose that fire and I’m not even happy doping this, and I’m just kind of forcing

myself into this for just my ego’s sake to win another one, or a fifth one, or a sixth one, then that’s not something I’m trying to live like.

Where would you draw the line healthwise?

I follow my blood work and urinalysis closely with doctors, especially specialty doctors. I just moved to the US, so I’m getting a new nephrologist ( a doctor who specializes in conditions that affect the kidneys), and I have a specialty doctor that monitors my stuff and I have a record of it for the last four years and nothing has really declined much. I had one health issue: I have an autoimmune disease [not bodybuilding-related] that can affect my kidneys at random. I’ve been managing that pretty well. So, if I can see a comparison to years prior that it’s declining at a rate that I’m not happy with—that my doctors aren’t happy with (they are aware of bodybuilding and all that’s involved)—then it would just be a comparison of the change over the years and if it’s declining at a rate I’m not happy with then I’ll pull out.

In 2021, 31 male and female competitors pass away across the globe. Is that something that weighs on you?

I think you’re a fool in this sport if you think you’re all set and have nothing to worry about. It’s something I hope every single one of us worries about and gets the right checks and balances—make sure you’re seeing the right specialists and doctors who know you’re as healthy as you can be doing what you’re doing. There could have been a lot of factors involved in all those deaths, especially considering the year it was—I’m not going to get into that—but, of course it’s on my mind. I hope it’s on everyone else’s too.

Point blank: Is this your last Olympia?

People always ask me how many more Olympias do I have in me, and I answer, “One more.” And then I pause and say, “and maybe one more after that.” I really don’t know. That’s the honest truth.

How sure are you that you’ll win the 2022 Classic O again?