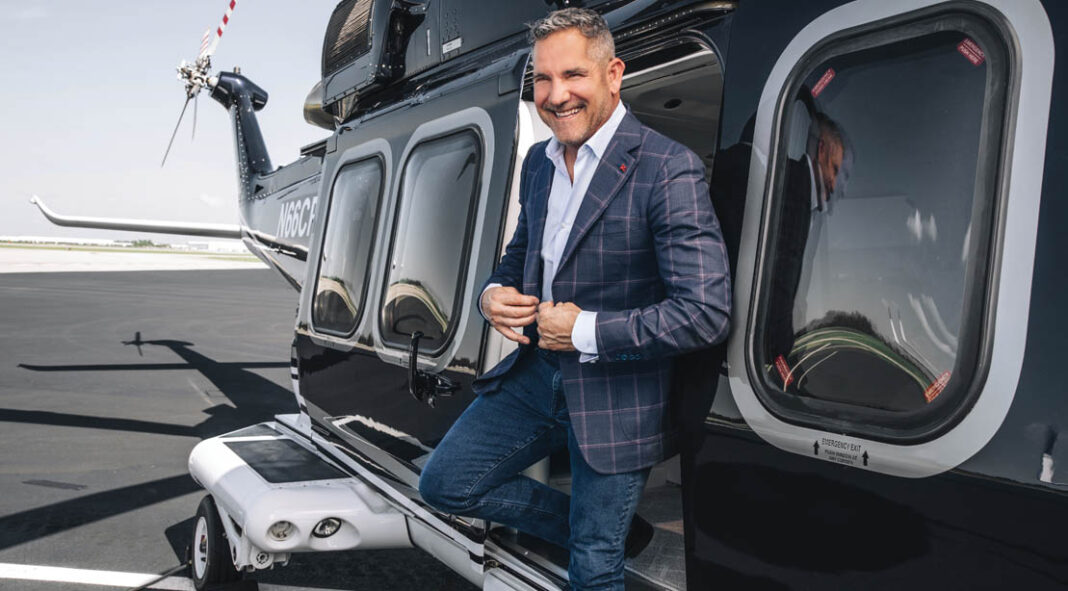 You won’t find too many entrepreneurs with the hustle and motivation to win like Grant Cardone. To date, the CEO of Cardone Enterprises and Cardone Capital manages a nationwide multifamily portfolio valued at over $5 billion. He is the top crowdfunder in the world, raising over $600 million in equity via social media. He’s a New York Times bestselling author of 11 business books— we could go on and on about what he’s doing in business, sales, and marketing.

While he seems to be “on” at all times, it was just four years ago when Cardone experienced the pains and aches from the grind of 30-plus years of building his empire. Knowing he needed to get his health in order, and not wanting to go through various surgeries that would immobilize him and have him on painkillers, he began researching how to combat the wear and tear on his body. He came into contact with Gary Brecka, who was the CEO of Streamline Medical Group. Brecka ran some tests on Cardone and instituted a new regimen for the then-60-year-old.

The results were so great that Grant Cardone offered to buy the company and partner with Brecka to form the 10X Health System, which focuses on preventive health programs that provide access to customized health solutions based on individual genetic testing. Cardone credits the system with helping him get in the best shape of his life, feeling the best he ever has. You can’t own and operate seven privately held companies and a private equity real estate firm with a portfolio of assets under management of over $5 billion without putting your health first.

Grant Cardone spoke with Muscle and Fitness on the origination of the 10X Health System and how it has helped change his life. Here, he also explains the importance of rest, why his diet is still a work in progress, what makes a wealthy entrepreneur, and what he looks for in real estate deals.

My routine is to wake up in the morning and work out. We have an oxygen bag with 900 cubic liters of pure oxygen that I consume while riding a stationary bike. I’ll get my workout in. There’s a magnetic mat. I do infrared bed at least once a day to basically start healing the damage of 60-plus years. That was four years ago, and now I’m in the best shape I’ve ever been in. It’s solved 99% of my problems. I run 18 companies, so keeping track of everything requires you to be clear, have energy, and not be in pain. When you’re in pain, you’re paying attention to your pain. Not your plan. Now, I’m just hitting the major core muscles. I just have to keep it all working. I’m 64 years old, and things have started breaking down. I do my routine, which is leg day, back day, arms, and then rotate it. I also do a lot of cardio—not enough, though.

Without 10X Health, I’d probably be in a hospital right now with a heart condition. I would have probably had to have both of my knees replaced. My ankle would have definitely been operated on. Both of my rotator cuffs have been completely healed without any of the bullshit. That’s probably four surgeries, a heart condition, and I’d probably still be overweight. Also, I’m not in perfect condition. I see Mark Wahlberg and think, “God damn, Mark looks good!” and that’s an inspiration to me. The only thing that I haven’t gotten right is my diet. I like chocolates, and I’m not strict enough on my diet.

Grant Cardone Is a Work in Progress

The biggest mistake I think I make is that I don’t eat enough, and I don’t drink enough water. I eat [business] deals—that’s how I fill myself up. I haven’t figured the diet thing out. I know it’s not complicated either. It’s simply needing to consume a lot of water, and I’m not doing it. I also need to eat more often. The only other time I’ve cut weight was when I was eating every two hours. I tried going vegan before, and that was a great improvement for me. I was shooting Undercover Billionaire. I was in Pueblo for three months and had a farm behind this RV, where I was living. I would go over there and get vegetables, and that’s how I lived for 90 days.

No matter what, I get eight hours of sleep. I tried sleep deprivation, and it was terrible for me. I did it for years when I was coming up. From 29 to 35, I was sleep deprived. Now, I try to get down at 9 p.m. and be up at 6 a.m. to beat the sun up every day. I spend a lot of time with my family. They roll with me everywhere I go. We homeschool our kids so that they can travel with us. Sometimes, they like traveling with us, and sometimes they don’t. But I like traveling with them. I wake up in the morning, look at my money first, and look at every account I have. I hit that oxygen bag on the bike, get my workout in, and then it’s work all day. That’s paying attention to my business and meetings and then sleep and repeat the next day.

The thing that allows people to keep getting up, staying motivated, and that no one ever talks about, is winning. If you’re not winning when you’re working out, you’re going to quit working out. The people who don’t get results quit working out, and the people who do, keep working out. It’s the same thing in business. People who are motivated are motivated because they’re winning. They’re making money, getting customers, or making a difference to their clients. I win a lot, and I believe it’s so important to my mental, physical, and financial health.

The mindset comes from being dissatisfied for so many years of my life. I’d go see a therapist and ask what’s wrong with me. I told them I was disappointed in myself and dissatisfied. The therapist would tell me I had depression, and they wanted to treat me with drugs. I wasn’t doing the drugs. They would try to just sweep those thoughts under the rug, but what’s wrong with me being disappointed in myself? The therapist would ask, “What’s wrong with loving yourself the way you are?” Because I don’t love myself when I’m operating below my potential. I’m not going to lie to myself because I know I could do more. I think that’s what keeps me going. I know I can do more, and if I know that, I should do more. I don’t use disappointment now to depress me. I use that to encourage me to become all that I can be.

Vitamin D is Discipline. I’ve not been lucky. It’s been 35 years that I’ve been running this. I’ve been waking up, trying to move the ball down the field. Also, vitamin E, which is Energy. You have to bring energy to the game, and the way I do that is I keep recreating myself. I’m not who I was 30 years ago, 20 years ago, or even five years ago. It’s easier to do more than to do less, and it’s easier to stay excited about doing more than less. More is not the problem. More people is more fun; more deals are more fun; more money is more fun; and even more problems can be fun, as long as they’re big and juicy. That’s the difference between a really successful entrepreneur and an Instagram wannabe. No offense, but there’s a lot of pretending going on because of social media. There are a lot of people giving advice before they really should. I would say the guys who I know have made it, they make it and go to another level, and they keep going. They recreate themselves, have tremendous discipline and energy, and have a lot of vitamin C, which is Courage. When they see something, they move and go all in on it.

29 Thoughtful Thanksgiving Books for the Classroom