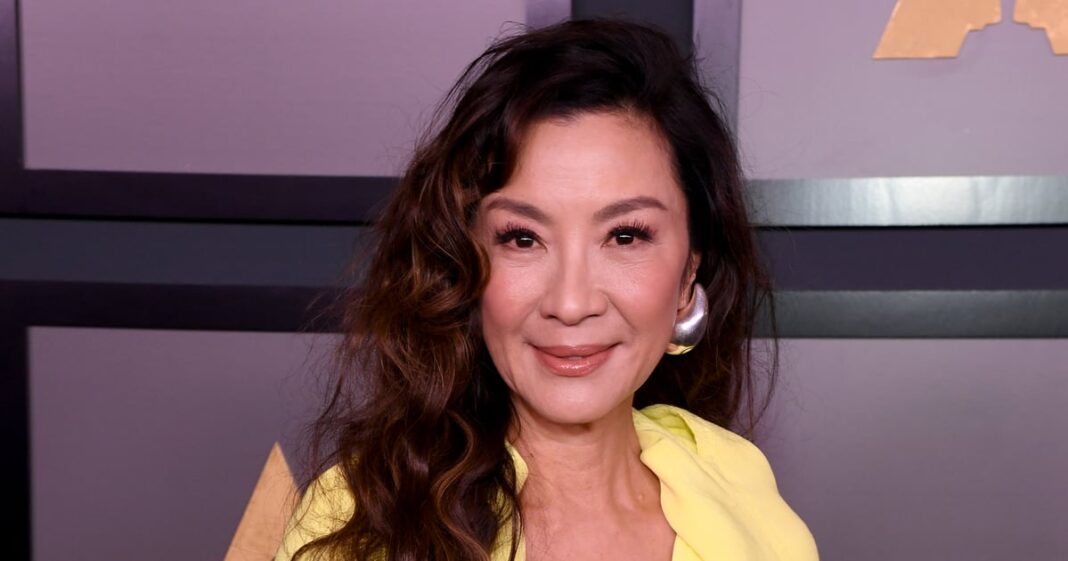 After more than a decade of attempts, the “Wicked” movie is really happening. Back in November 2021, director Jon M. Chu (who directed “Crazy Rich Asians” and “In the Heights”) announced that the film will star Ariana Grande as Glinda the Good Witch and Cynthia Erivo as Elphaba, the Wicked Witch of the West. On Dec. 8, the movie added yet another superstar to the cast: Michelle Yeoh as Madame Morrible. Representatives for Yeoh did not immediately reply to POPSUGAR’s request for comment, but Variety first reported the news. Yeoh is currently stirring up major Oscar buzz for her starring role in 2022’s “Everything Everywhere All At Once” and most recently appeared in Netflix’s “The School of Good and Evil.”

News of Yeoh’s casting came just a day after it was announced that Ethan Slater, who played the titular role in “SpongeBob SquarePants: The Broadway Musical,” will also join the movies as Boq to Munchkin. Slater was Tony-nominated for his performance.

Back in September, we also learned that “Bridgerton” heartthrob and Olivier Award winner Jonathan Bailey will appear in the films as the story’s main love interest, Fiyero. Chu confirmed Bailey’s casting on Sept. 21 on Twitter. “He’s perfect, they’re perfect. They’d be perfect together. Born to be forever,” wrote Chu. “I am too excited to pretend this hasn’t been happening. We have a Fiyero!!!! #JonathanBailey #Wicked.”

He’s perfect, they’re perfect. They’d be perfect together. Born to be forever….. I am too excited to pretend this hasn’t been happening. We have a Fiyero!!!! #JonathanBailey #Wicked https://t.co/meT51cGqDe

While we’re still waiting for announcements on some of the key members of the cast, on Dec. 7, Chu confirmed on Instagram that filming has begun on the project. On Oct. 11 during pre-production, Ariana Grande shared some Instagram photos from “Wicked” rehearsals. In the carousel’s first photo, the star posed alongside Erivo in a dance studio, and in another, she smiled alongside choreographer Will Loftis, showing the “Wicked” cast in the midst of getting ready for the movie’s epic musical numbers.

The cast and crew have been keeping fans updated with exciting announcements since the film was first confirmed. In an April Twitter post, Chu revealed that they’re actually going to split the musical into two films. He wrote in part, “Here’s what happened: As we prepared this production over the last year, it became increasingly clear that it would be impossible to wrestle the story of ‘Wicked’ into a single film without doing some real damage to it. As we tried to cut songs or trim characters, those decisions began to feel like fatal compromises to the source material that has entertained us all for so many years.”

He continued, “So we decided to give ourselves a bigger canvas and make not just one ‘Wicked’ movie but TWO!!!! With more space, we can tell the story of ‘Wicked’ as it was meant to be told while bringing even more depth and surprise to the journeys of these beloved characters.”

Chu added, “Cynthia, Ariana and I — and all the cast and crew — pledge to create nothing less than an experience that honors its foundation for all the fans who’ve waited for this movie, and to offer a thrilling, fantastical world full of dynamic characters that invites those who are unfamiliar.” The director also wrote that the first movie would come out Christmas 2024 and the second would hit theaters Christmas 2025.

Here’s everything we know so far about the “Wicked” films, including the cast, release date, trailers, music, and more.