Who Is King at the End of Black Panther: Wakanda Forever? 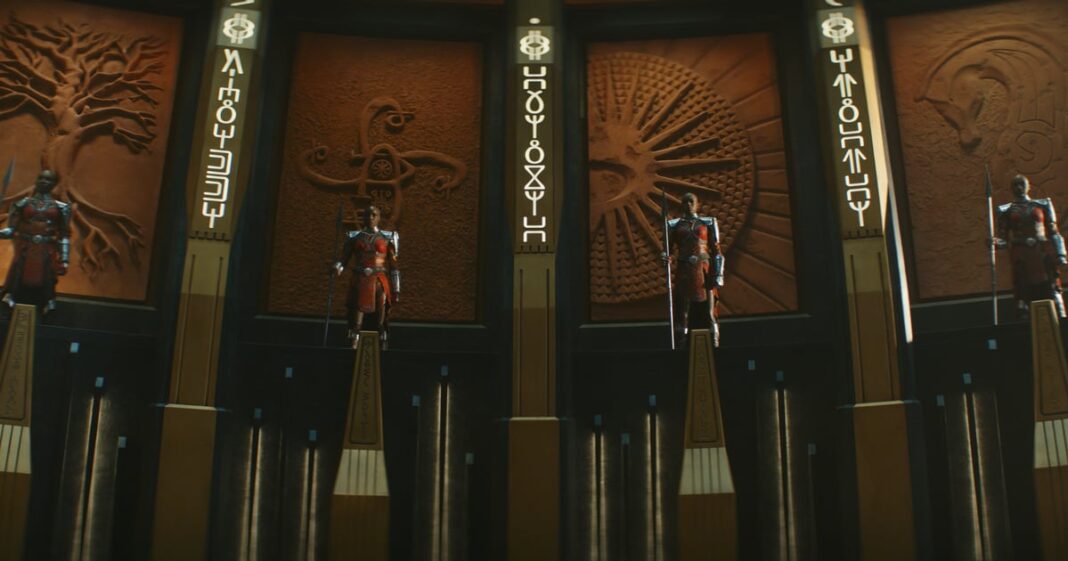 “Black Panther: Wakanda Forever” takes place in the aftermath of the death of T’Challa; director Ryan Coogler decided to have the character die in the MCU rather than recast the role after Chadwick Boseman’s death in 2020. For months, fans wondered who would take on the role of Black Panther after T’Challa’s death, but he was not just the Black Panther, he was also the King of Wakanda. Traditionally, the ruler and the Black Panther have been one and the same, but “Wakanda Forever” adds some complications to this. Ahead, we’re breaking down who’s the ruler at the beginning of the movie, who’s the ruler at the end, and how the Wakandan waterfall challenge day ceremony works.

Who Is the Ruler of Wakanda at the Beginning of “Black Panther: Wakanda Forever”?

At the start of “Wakanda Forever,” Queen Ramonda (Angela Bassett) takes over the role of Wakanda’s ruler. She represents the nation at international meetings and sits with her council to discuss pertinent issues. Shuri (Letitia Wright) is still a princess. Ramonda is disappointed that Shuri has not tried to regrow the Heart-Shaped Herb so that she can try to become the Black Panther (Michael B. Jordan’s Erik Killmonger destroyed all of it in the first movie) and, presumably, the queen. But Shuri, still grieving and blaming herself for T’Challa’s death, doesn’t want to do it.

Midway through the movie, Ramonda is killed in an attack by Namor (Tenoch Huerta) while saving Riri Williams (Dominique Thorne). Shuri doesn’t take up the mantle of leadership, instead letting it fall to M’Baku (Winston Duke) and others for the time being. But once she’s able to regrow the herb and gets the powers of the Black Panther, she takes on a leadership position and everyone follows her into battle against Namor.

Who Is the Ruler of Wakanda at the End of “Black Panther: Wakanda Forever”?

At the end of the movie, all of Wakanda has gathered at the waterfall to once again have the ritual combat ceremony that lets someone become the ruler. T’Challa took part in the challenge day ceremony twice during “Black Panther.” The first time, every tribe in Wakanda is asked if they want to challenge for the throne. When it seems that no one will challenge, M’Baku appears, and the two fight. T’Challa spares his life and lets him yield. The second time, he’s challenged by Killmonger, who wins and throws T’Challa over the waterfall. Presumably, after Killmonger is defeated, T’Challa does the ritual a third time in order to officially be named king again.

Everyone expects Shuri to show up at the challenge day ceremony at the end of “Wakanda Forever,” where she’ll be named queen. But instead it’s M’Baku who exits the plane to potentially be named king. We don’t see if he has any challengers, but, presumably, if he does, he defeats them and becomes king.

Shuri, we learn, instead goes to Haiti to stay with Nakia and mourn her brother and mother. There, she meets her nephew, Nakia and T’Challa’s son. He’s the true heir to Wakanda, and presumably when he comes of age M’Baku will cede the throne to him.