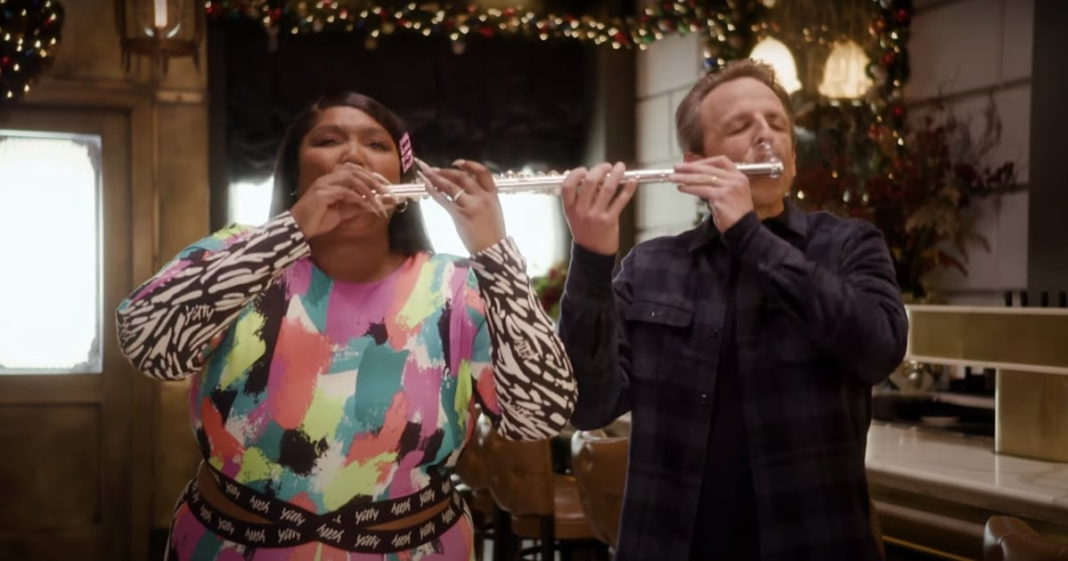 Lizzo had quite the afternoon in a recent segment for “Late Night With Seth Meyers.” In a video released on Dec. 13, the singer day drinks with the late-night host at NYC bar Valerie while playing a series of silly games. The two laugh nonstop during the 17-minute segment, downing shots of tequila, eggnog, and cocktails in between.

They start by taking shots from the ends of a flute, before Meyers mixes various cocktails based on Lizzo’s songs and career. Titled after Lizzo’s “Grrrls,” one of the cocktails combines different drinks named after girls like margarita, sherry, and Dr. Pepper, which the singer describes as tasting like Heinz ketchup. At one point while making Lizzo-themed cocktails, the two even “slap the bag” with cheap boxed wine.

During the segment, Lizzo and Meyers also commence a game of truth or truth, in which they answer questions honestly or take a shot of tequila. Meyers doesn’t play easy — he asks Lizzo the worst thing she’s ever done on a plane (“I have to respect his privacy, if you know what I’m saying”), whether she thinks Oprah Winfrey or Beyoncé is more powerful, and who she believes is the most overrated artist in music right now. She immediately downs shots to avoid answering the tough questions, responding to the last, “If I say this and break the internet . . . I’m not going to.”

Elsewhere in the video, the duo can barely contain themselves as they tell each other “nog nog jokes,” pretend to break up with one another, and call Meyers’s father. In a notably hilarious moment as they leave Meyers’s dad a voicemail, Lizzo blurts out, “Oh, your last name’s really Meyers!” Prepare for belly laughs, and watch the joyful video in full above.