Tessa Thompson Talks “Thor: Love and Thunder” on “Hot Ones” 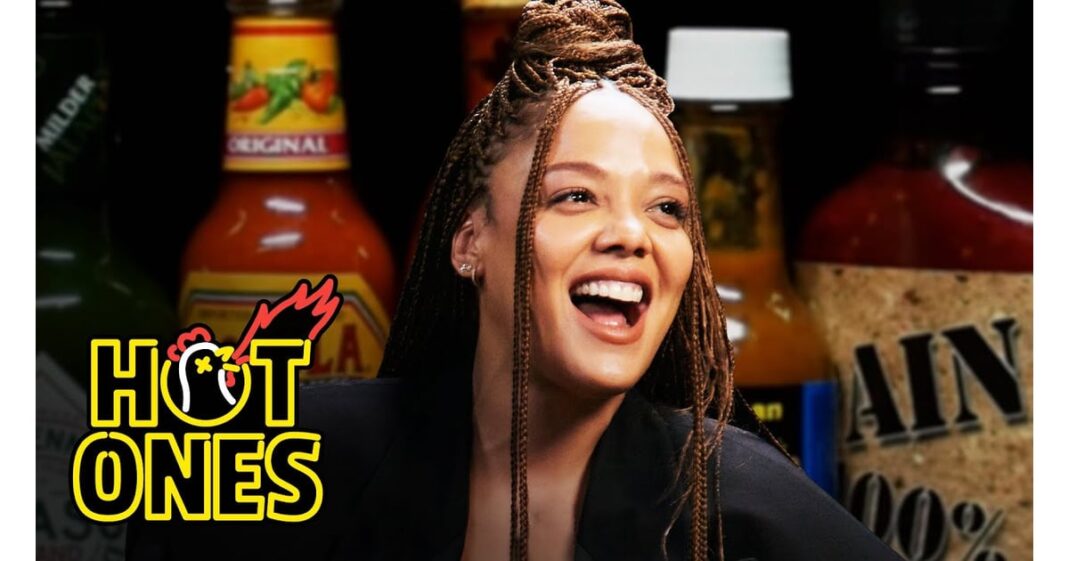 Tessa Thompson appeared on “Hot Ones” on July 7, where she opened up about the Thor franchise, telling Sean Evans that while “Thor: Ragnarok” was trying to “destroy every Thor movie that had come before” by challenging clichés and disrupting viewers’ expectations, the franchise’s next installment, “Thor: Love and Thunder,” is attempting to “recapture the magic” of the original film. “I think it’s being able to hold a lot of different tonal pockets all at once,” she said. “Can a film be funny and silly and irreverent, but also can it be heartfelt? Can it be earnest? Can those things careen into each other in a way that feels organic? But I sort of think that that’s the way that life is.”

Thompson plays Valkyrie in the film, which stars Chris Hemsworth and Natalie Portman, among a host of other big names. In the film, her character is openly LGBTQ+, a first for the MCU. She also discussed how getting her start performing in Shakespeare plays, many of which required her and other cast members to play characters of different genders, taught her a lot about how masculine and feminine presences are sometimes interpreted differently on stage. “There was this idea that men are just more upright, that men aren’t inclined to break their lines, and for some reason, we associate that with power,” she said, explaining that though “it shouldn’t be like that,” in taking on Valkyrie, a “character that wants to feel really powerful — not masculine, necessarily — I thought about that,” she said, adding that “getting buff” also helped her find the character’s power.

As the wings grew spicier, she fielded questions about her production company and confessed that Elizabeth Olsen is her favorite “Hot Ones” interview of all time, saying that she wore a blazer to reference Olsen’s iconic appearance.

Later, fighting back tears from the spicy wings, she discussed creating original music with Ludvig Göransson for the 2015 film “Creed,” saying that the pair locked themselves in a studio for two weeks to make the music for the film. “We had friends of him come over and write with us, like Donald Glover . . . and Moses Sumney and all these incredible artists. I’ve dabbled in music, but I’m not like them. They could do anything. They could eat two cutting boards of these hot wings and sit down and sing,” she said. “It felt like preparation for the role — kind of like a fake it till you make it.” Finally, she discussed working as a bar and bat mitzvah dancer in her youth and, after tasting the spiciest sauce on the roster, managed to answer a few questions about her opinion on various GOATs. The greatest Kraft service snack, she said, is Hot & Spicy Cheez-Its, and the greatest movie adapted from a book would be “The Talented Mr. Ripley.”

“Thor: Love and Thunder” premieres in theaters on July 8. It was directed by Taika Waititi and features Christian Bale as the villain as well as cameos from Hemsworth and Portman’s kids, among other notable appearances.

The Brief History of Hip Hop

Train like a pro & get in the best shape of your life with The BodyFit App! https://bbcom.me/2FC4vvP